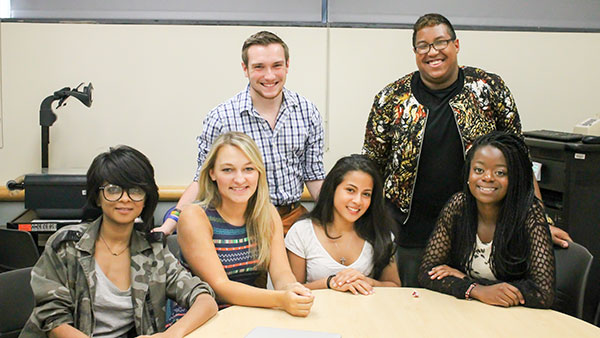 The Monday night meetings have yet to begin, but the Student Government Association executive board that was elected in May 2014 has centered its 2014–15 agenda on a key concept: inclusion.

Kayiza said one main challenge the SGA has had is the lack of knowledge among the student body with regard to what issues the SGA is actively addressing. She said it is their goal to communicate that students and organizations are welcome to participate in their meetings.

“It’s definitely been our fault in the past for not letting students know that our doors are open,” she said.

To make the SGA more accessible, James said, they are planning to make individual social media accounts for each of the members as well as a blog including the key points of the weekly meetings, creating more avenues for staying informed.

James estimates the SGA currently interacts with about 200–400 students for each issue that is publicized on social media, but this number fluctuates with the content.

In addition to social media, James said the executive board wants to re-establish the rule that each senator go to one student organization meeting every month and report their attendance, feedback and availability as an SGA liaison.

“It wasn’t as highly enforced last year as we wanted it to, but we started a dialogue between student organizations and SGA, and I look forward to that in the future,” he said.

Rojas said she wishes to be a more accessible resource for student organizations that need information on applying for grants and that wish to sit with the Senate Appropriations Committee when allocating the respective organization’s budget.

Though diversity and microaggressions were the forefront issues of last year’s SGA, Kayiza said this year they will evaluate student feedback from the IC Student Task Force on Diversity and Inclusion before deciding how to proceed with addressing the issues relating to student demographics.

“I think that continuing those discourses is going to be really important, but we also have to make sure that conversation also turns into tangible objectives that we can actually measure and complete,” she said.

Kayiza said it may take on the look of a conversation more among faculty, staff and the SGA, but the executive board is flexible to students’ needs.

“We’ll see in the next couple weeks how the tone of the campus is,” she said.

Another large concern for the executive board, Logsdon said, is making the Integrative Core Curriculum more interpretable and understandable to the student body.

“The big issue with the way it’s presented is that it’s all from a top-down method,” she said.

She said her solution to this mode of communication would be to have ICC student ambassadors who are trained in the workings of the curriculum be resources for incoming freshmen.

The SGA also plans to address the possibility of bringing another big-ticket act to the campus. Lipford said he has been looking into past research on student interest in the matter, but there are still gaps in the research that need to be filled before deciding what kind of act students actually want.

“It’s going,” he said. “Bringing Seth Meyers was considered a big act, but we’re trying to change the conversation to be, is that what students want, and how can we make it so that students feel like their campus pride is there, that so-and-so came to my campus,” he said.

Since he also serves as executive director of the Bureau of Concerts, Lipton said he is arranging for the SGA and the BOC to collaborate on student surveys and polls. The partnership, he said, has yielded better survey results in the past, rather than one organization working alone.

The e-board seeks to extend student input further into the SGA’s legislative action as well. While there is a signatory process for elections, there isn’t currently a requirement to obtain student signatures on bill proposals, which the  executive board looks to enforce, Kayiza said.

“We genuinely believe that you are representative of your constituency and that you should have to go talk to people that you’re representing,” she said. “What’s unfortunate is a lot of senators are really passionate about their positions, but people don’t know who their class senators are.”

She said because students are not always aware of the bills being proposed, too many bills stay on open agenda for extended periods of time.

“I’m hoping that if more students know about it, there’ll be more urgency to get more things resolved in the Senate,” she said.

Logsdon said she wanted to emphasize that these are the views of a small percentage of the SGA and that the vision will be more complete when elections are held Sept. 24–25.

Platform presentations for the 12 remaining positions will be held at 7 p.m. Sept. 22 in IC Square.