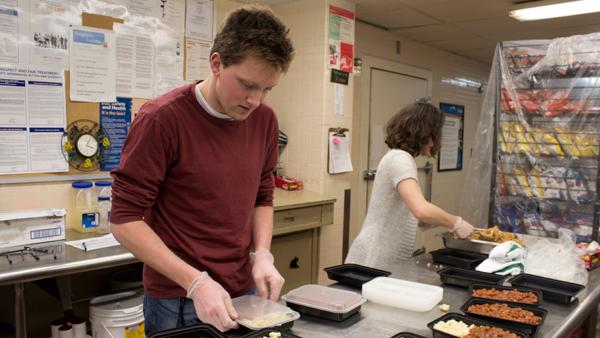 On Friday, senior Natasha Thompson, junior Megan Strouse and freshman Zach Myers met in the kitchen of Towers Dining Hall at closing time. Waiting for them in the oven and the refrigerator were several trays of untouched food. Instead of letting unused food from the day be composted, the three students packed it into single-meal-sized containers and donated it to local shelters in hope of helping feed the less fortunate in the Tompkins County community.

Ithaca College composts about 20 percent of its total waste stream, according to a website maintained by Mark Darling, sustainability programs coordinator at the college’s Facilities Services.

Thompson, Strouse and Myers are part of Stop Wasting Ithaca’s Food Today, a club dedicated to making sure the extra dining hall food is put to good use.

At 4 p.m. every Friday, members of SWIFT prevent extra dining hall food from being wasted and help members of the community who are going through tough times by providing them with food to eat. SWIFT salvages about 40 meals, in addition to salads and sandwiches, every Friday. The food is donated to local organizations like soup kitchens, pantries and shelters depending on where it is needed each week.

Thompson, president of SWIFT, said the club was formed because people were unhappy with food getting thrown away and being wasted.

“[The founders] saw it as a way to help people and not waste food at the same time,” Thompson said. “So it’s kind of like a two in one.”

Freshman Danielle Kawryga said she joined the club after she began working at the Campus Center Dining Hall and was surprised that everything was composted.

“Nothing was saved for the next day,” she said. “Everything that wasn’t eaten was thrown away. I was really uncomfortable with the whole thing. I still am.”

On Friday, Thompson, Strouse and Meyers spent about 30 minutes packaging leftover chili, macaroni and cheese, quiche and stir fry. There were also leftover wraps, sandwiches and salads in the fridge. They placed labels describing the contents of each container, appropriate storage and serving temperatures and time best served by on the containers. They were then packed into cooler bags and insulated boxes and transported to a local shelter.

Thompson said the club has recently been donating to the American Red Cross Friendship Center.

“It helps us keep our cost for food down a little bit,” Pierce said. “It brings well-balanced, nutritional meals to people who are in crisis. The shelter clients are very busy, they have a lot of expectations placed on them during the day, and it’s a lovely thing when they can come back and find a hot meal that they don’t have to do more work to prepare.”

Thompson said SWIFT’s long-term goal is to expand to be able to donate to more locations in the area.

“The goal that has been in the forefront of our minds, which is really unattainable with such a small group, is that we want to get into more dining halls per week and at more times of the day,” Thompson said.

Strouse, treasurer of the club, said in the future the club will need more members, especially with cars, to facilitate packaging and making donations more often. She encourages others to join because it’s a great experience, and it doesn’t take a lot of time or effort.

“It’s just fun, it’s easy, and most people don’t do anything on a Friday afternoon, so why not just come?” Strouse said.