Student research on race in media accepted to national conference 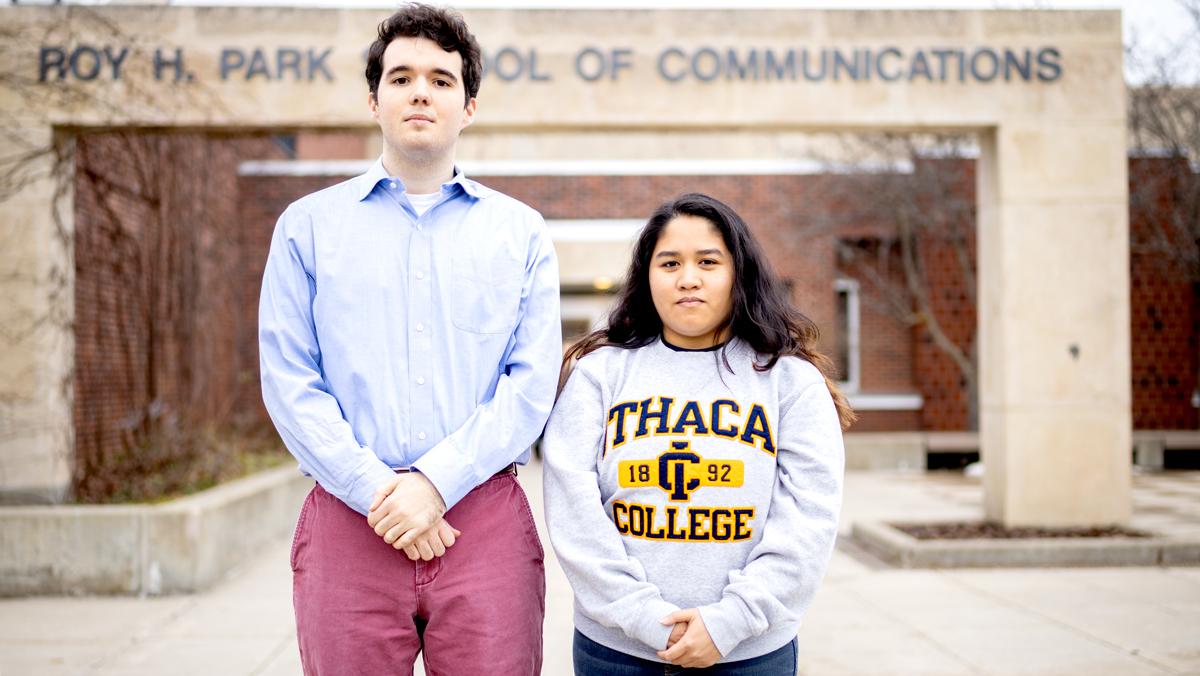 Reed Freeman/The Ithacan
Seniors James Murphy and Nicole Pimental have been accepted to present their research about the depiction of athletes based on their race at the National Conference on Undergraduate Research from March 26 to 28 at Montana State University in Bozeman, Montana.
By Alyshia Korba — Staff writer
Published: February 10, 2020

Two pairs of Ithaca College students have been accepted to present their research on race depiction in media at the National Conference on Undergraduate Research from March 26 to 28 at Montana State University in Bozeman, Montana.

The pairs conducted their research, which included producing their own surveys, last semester in their Mass Media Research course with Allison Frisch, assistant professor in the Department of Journalism. Junior Elizabeth Bierly and senior Diana Castillo researched the depiction of mass shooters in media depending on their race, while seniors James Murphy and Nicole Pimental looked at the depiction of athletes based on their race. Ithaca College will pay for transportation and accommodations for one student from each pair to attend the conference, Rowan Larkin ’19, administrative assistant in the Office of the Provost, said. Neither team has decided which member will attend.

Frisch said she encouraged all her students to submit their research.

“It’s a very high–profile place that’s recognizing that our students are of a very high caliber,” Frisch said. “These students put in so much time. They overcame some challenges, and I know they worked some very long hours and late nights to get this done, and I just think it speaks to how dedicated they were to their work that they were chosen.”

Frisch said the goal of the course is for students to learn methods of quantitative research and how to apply it to journalism. Murphy said the project was an opportunity to practice these research methods and apply them to their own projects.

“The project process itself was definitely a great opportunity to be able to use your skills in a way that is really valuable in today’s world, especially in journalism,” Murphy said.

Castillo said that they chose to focus on mass shootings because it is a relevant topic and that there is a lack of research about the media’s portrayal of perpetrators of mass shootings.

“Liz [Bierly] had brought up the idea of mass shootings, and, since it was so prevalent in this day and age, that’s something that we wanted to somehow focus on,” Castillo said. “Then, I brought up the topic of race in regards to how different perpetrators are viewed: what words are used, what photos are used, how they describe them.”

Bierly and Castillo analyzed 93 mass shootings between 2012–16. They found a strong correlation between perpetrators’ race and how they are depicted in the media. White perpetrators are more likely to be described as mentally ill, while black perpetrators are often depicted as violent criminals, according to their research abstract on the conference website.

Bierly said that her expectations and hypothesis going in were debunked in the research process.

“Originally, I thought that there would be a huge difference in coverage between smaller casualty shootings versus trends in how the media covers larger mass shootings,” she said. “But actually, it turns out that pretty much how it’s applied in main media coverage can be applied even at a small local outlet, which was really interesting.”

“One study in particular that we found was that audiences in their study thought that piece that reinforced the racial stereotypes was more credible than the ones that didn’t,” Pimental said. “So I thought that was really interesting, and it was something that we hadn’t seen before.”

Bierly said she hopes to continue her and Castillo’s research as an independent study to make the research more comprehensive and add more data to the map of mass shootings she created.

“I really think this is an important topic because what I found was that biases in media extend far beyond just Fox News or CNN,” Bierly said. “They go all the way into local outlets, and it really impacts how people are viewing mass shootings and also how people are viewing gun violence and the people committing that in general.”

Bierly said she did not expect to get as much out of the class assignment as she did.

“I definitely didn’t expect this class to produce something as meaningful as it did,” she said. “I really ended up putting a lot of myself into the research, and I didn’t expect to do that, but what came out of it was way more meaningful than anything I ever thought I would produce, especially as a junior in college.”