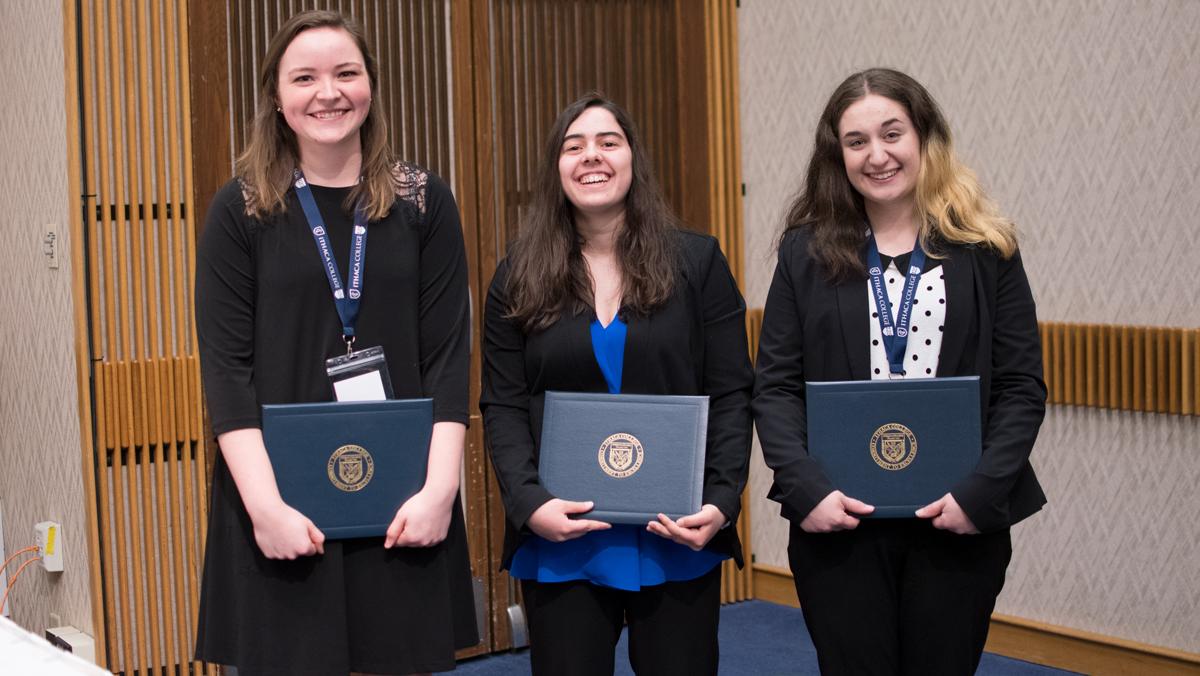 Students gave over 400 separate presentations at the 21st Annual James J. Whalen Academic Symposium held in Campus Center on April 12. Approximately 30 students were awarded at the end of the day for their individual or group presentations.

Awards were presented to students who did research in disciplines such as biology, computer science, occupational and physical training, emerging media and legal studies. The awards were divided among those who made visual, oral and poster presentations.

Finalist students are judged by professors in the school they represent. Kimberly Wilkinson, co-chair of the Whalen Symposium, said the awards are a recognition of the excellence of the presentation or poster. She said the awards, a framed certificate and bookstore gift card, can be listed on a resume or CV as a commitment to excellence in scholarship in their area of study.

Senior Tyler Denn-Thiele, an award–winner in the Health Science and Human Performance and Physical Training category, said the Whalen Symposium is a great experience for students to learn how to present their research.

Denn-Thiele said he has been researching idiopathic scoliosis, which does not have a known cause, since 2015. The focus of this research was to see if there were differences in running form in those who do have scoliosis compared to those who do not. He said that his group found statistically significant differences in the running form but that there was nothing that seemed clinically significant to them.

“It feels really great to get stuff out there that you’ve been working on so hard and have other people understand what you’re trying to do and why it’s important,” Denn-Thiele said.

Denn-Thiele first presented on this work at the Whalen Symposium in 2016 when it was starting out. Since then, he said he participated in the National Conference for the American College of Sports Medicine.

“It’s nice to see how I have grown,” he said. “For me, it’s not really about the winning.”

Although he is graduating, he said that the presentation will be presented at the World Conference of Biomechanics this summer and that other students will be able to pick up on this work in the future.

Those who wished to participate in the symposium submitted an abstract by March 5 and choose whether or not they would like to submit their presentation for an award. If a presentation was considered for an award, the presenters were notified March 19. The award ceremony was held in Emerson Suite A from 3:50 to 4:30 p.m. on the day of the symposium.

Junior biology major Madison Chlebowski won an award for her poster presentation in the biology category. For about a year, she studied how mutations in the genes of zebrafish altered how they behaved or reacted to sensory stimuli.

“It’s kind of surreal that what I’m doing can actually get some academic recognition and actually matters,” Suna said. “I can actually succeed in making games for social change if I want to.”

Suna said she decided to make a game that would simulate a woman trying to apply to be a CEO of a technology company while dealing with sexist comments from a man.

Suna said she hopes to go to the Games for Change Conference from June 28 to 30 in New York City.

Students from each of Ithaca College’s five schools came together today to speak at the James J. Whalen Academic Symposium throughout the day in Campus Center. The symposium was organized to present and celebrate student work and serves as the first event in the weekend’s inauguration of President Tom Rochon. More than 170 students displayed…