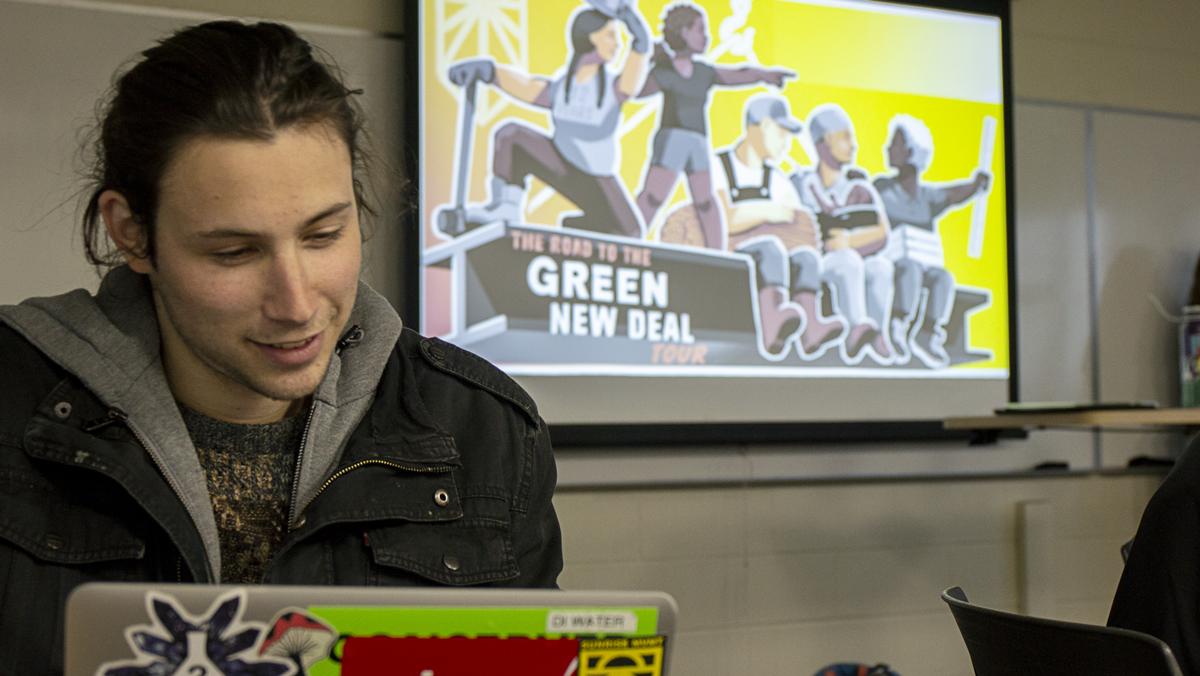 The group is currently based on campus but plans to expand to include the Town of Ithaca and Cornell University’s campus. The Sunrise Movement is a nationwide climate activism organization made up entirely of youth activists. According to the Sunrise Movement website, the goal of the organization is to stop climate change and create jobs in the sustainable energy industry. The Ithaca-based campaign announces events and meeting times through its Instagram account Sunrise Ithaca — @sunrise.ithaca — and on its Facebook page, Sunrise Movement Ithaca.

The Ithaca hub of the Sunrise Movement was founded by seniors Marisa Lansing, Mike Moritz and Mike Hanlon, sophomore Sophie Becraft and freshman Emily Gronquist. They began the planning process in early November 2018. The group held its first meeting March 5 with nearly 90 people in attendance, according to Moritz.

Hanlon said they wanted to get involved with the Sunrise Movement because the group is entirely youth-driven and aims to take serious action against climate change.

Both the local and national branches of the Sunrise Movement take action by pressuring politicians to stop accepting money from the fossil fuel industry and to implement policies that support sustainability. They do this through rallies, meetings and petitions.

“The climate crisis affects all of us,” Hanlon said. “I’d say it’s the biggest issue facing our world today, and it’s also the biggest social issue. The Sunrise Movement is really important to me because it’s doing something serious about this issue.”

Lansing said the movement is important to bring to the college campus because it will encourage younger generations to get involved in taking political action.

“I think there’s definitely a lack of political action on our campus, so Sunrise is a really good opportunity for young people to start learning how government works and how you can initiate change,” Lansing said.

On March 22, Sunrise Ithaca attended a rally organized by Climate Justice Cornell on Cornell University’s campus meant to pressure Cornell into financially divesting from oil and gas companies. The people at the rally marched across the campus and presented the Board of Trustees with a petition signed by more than 1,000 students and community members requesting that the university end its affiliation with the fossil fuel industry.

“I think that the divestment campaign is going to continue; it doesn’t just stop here,” Lansing said. “They’re going to keep pushing for this to happen because Cornell has millions and millions of dollars invested in the oil and gas industry.”

The leaders of Sunrise Ithaca also attended the Upstate New York’s Troublemakers School, which is a leadership workshop for activists to learn strategies for organizing effective campaigns. The event was hosted by Labor Notes and the Tompkins County Workers’ Center and held March 23. Sunrise Ithaca leaders attended the event in downtown Ithaca to learn about the labor movement.

In Sunrise Ithaca’s weekly newsletter, members said they hope to create a climate justice movement that is in solidarity with the labor movement. One of the goals of the Sunrise Movement is to create jobs by expanding the sustainable energy industry.

“We can halt climate change and create tens of millions of jobs by upgrading America’s outdated infrastructure,” The Sunrise Movement states on their website. “We could enter a new age of prosperity and health and bring forward the people this country has left behind.”

In either April or May, the organization will be hosting a Green New Deal Town Hall meeting in the Town of Ithaca. The National Sunrise Movement is encouraging all hubs to organize town hall meetings to have a community discussion about the Green New Deal, which is a proposed plan to address climate change at the federal level.

“One of the big pieces of the Green New Deal is the development of good-paying new jobs building green infrastructure,” Hanlon said. “It’s important that we are building coalitions with people in the labor movement as well.”

Students and community members looking to get involved in Sunrise Ithaca can contact sunrise.ithaca.ny@gmail.com for more information or to sign up for the weekly newsletter.