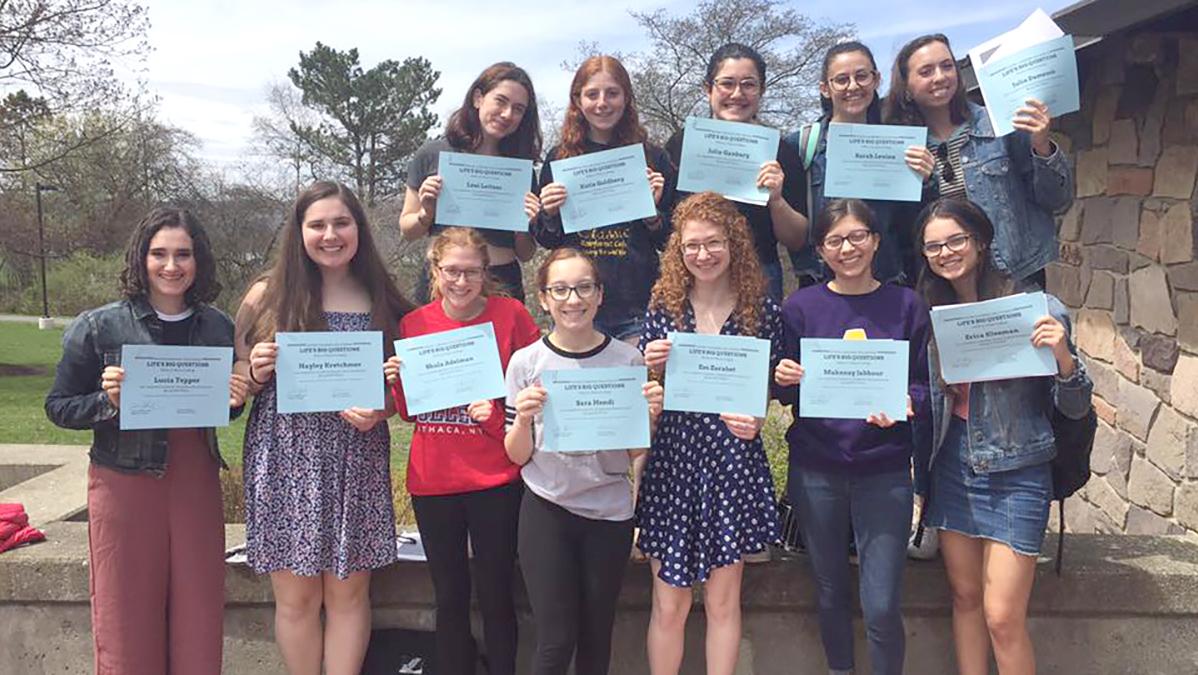 Beginning Feb.17, members of Ithaca College’s Jewish community have been gathering to discuss important themes in Judaism through the Jewish Learning Fellowship (JLF).

The Jewish Learning Fellowship was founded at the Bronfman Center for Jewish Student Life at New York University in 2007 as a way for students to deepen their understanding of Judaism through conversation on topics like college life, identity and romance. Since then, the program has expanded to universities across the U.S. Now in its third year at Ithaca College, the 10-week program run by Hillel at Ithaca College — titled “Life’s Big Questions: Or, How to Get More Out of College” — will allow students to define what it means to be Jewish on their own terms.

Lauren Goldberg, interim director of Religious and Spiritual Life and executive director of Hillel, said the program was for anybody at any point in their Jewish studies.

“It’s an engagement [between] the individual and the [Jewish] text that grows your relationship to the text in this communal way,” Goldberg said. “It also kind of demystifies … things that can feel unrelatable. At first read, we do our best to teach students methods of entering into the text through Jewish ways of study that allows you to access some of the richness that maybe at first feels a little bit out of reach …”

Max Kasler, the Springboard Innovation Fellow for Hillel, said the biggest goal of the program is for people to leave with new connections to both their peers and their own Judaism.

“Not everybody knows each other going into the door,” Kasler said. “But when they leave … it seems like people walk away with really strong friendships from this as well.”

Kasler also said new ideas were constantly presented during the fellowship by participants, which allowed him to see older and unchanging texts, like the Torah, in a new light.

Cantor Abbe Lyons, Jewish Chaplain of Hillel, said one conversation in the program that stood out to her was the discussion of a quote from the Talmud — a text that contains the history and laws of Judaism. Chaplain said students had different interpretations of what a word in the quote was referring to. She said responses ranged from life, God and one’s body.

“You think about what it is to really keep turning your perspective on this one thing, which could be as finite as your own body and as enormous as the entire world … There’s lots of room for that idea of continuing to seek new perspectives and keep discovering within that same paradigm.”

Freshman Julia Freitor, who came into the fellowship with little knowledge of Judaism, said that learning about its history is important for her understanding of how it intersects with her identity.

“I’m trying to find the correlation between my ethnic identity, my social identity, my religious identity and how it all plays together,” Freitor said.

In the aftermath of the discovery of two swastikas on campus, Freitor said the fellowship was needed more than ever to create a sense of togetherness.

Freshman Libi Warmund, who is also participating in the program this semester, said they were deeply connected to their Jewish identity, attending Jewish day school and going to their community synagogue every week. Joining JLF was an opportunity for Warmund to continue their studies and learn new ways of thinking about Judaism.

“Some of the conversations … I’ve been coming at it from the same perspective my whole life and then somebody else is coming with a completely new and fresh perspective,” Warmund said.

Warmund also said the conversations were relevant to the student’s interests, with one conversation focusing on the war in Ukraine and the emotions that students were feeling.

“It’s a great space for us to air out what we’re feeling, especially with the Russia-Ukraine situation,” Warmund said. “A lot of people have parents and grandparents that were Jewish refugees that came from there.”

Graduate student Dara Spezial, said that participating in JLF was the first time she really got the chance to learn about Judaism. More than anything, she said the program reaffirmed the idea that there are many ways to be Jewish.