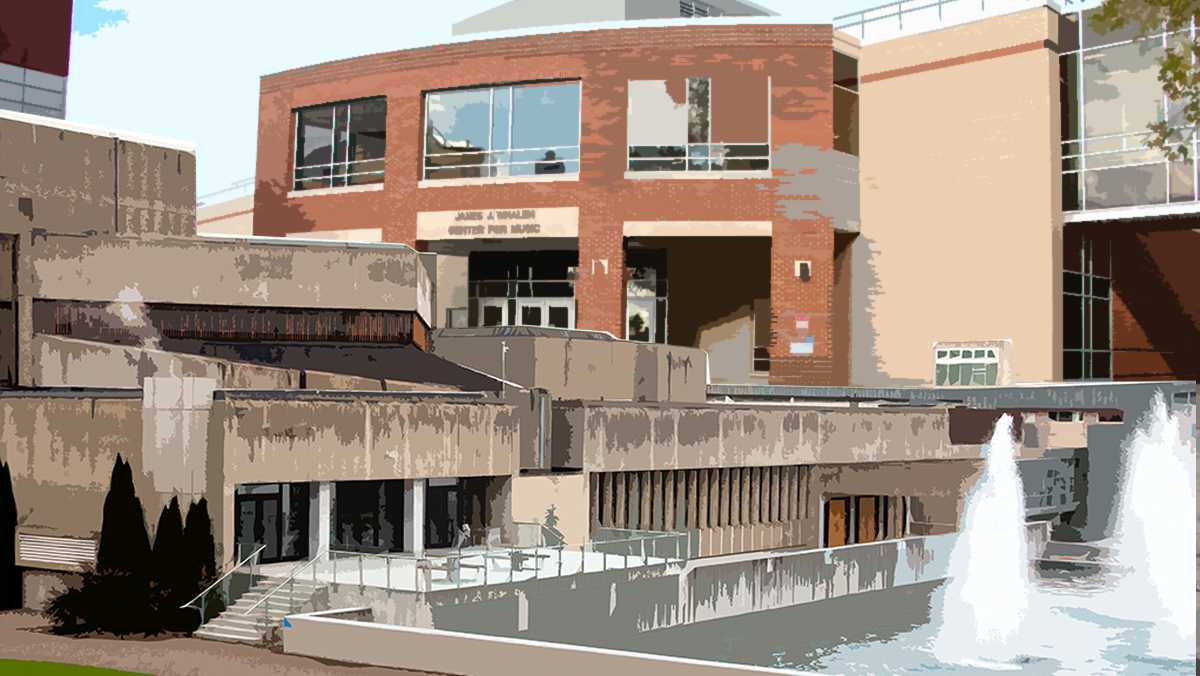 Abbey London, Abby Brady/The Ithacan
The first phase of the APP included the elimination of 116 full-time equivalent (FTE) faculty and 26 majors, departments and programs. The second phase will focus on reorganizing and restructuring different academic areas, including moving the theater department into the School of Music.
By Syd Pierre — Assistant News Editor
Published: October 28, 2021

As Ithaca College moves forward with the second phase of the Academic Program Prioritization (APP) process, some members of the campus community have concerns about how the move of the Department of Theatre Arts — currently housed in the School of Humanities and Sciences — to the School of Music will impact students.

The first phase of the APP included the elimination of 116 full-time equivalent (FTE) faculty and 26 majors, departments and programs. The second phase will focus on reorganizing and restructuring different academic areas, including moving the theater department into the School of Music.

The Department of Theatre Arts houses the theatre studies, acting, musical theatre, stage management, theatre production and design, and theatre arts management majors, as well as the dance and theatre minors. The department was ranked No. 1 out of 386 colleges and universities in the 2021 edition of the Princeton Review. The School of Humanities and Sciences houses over 50 majors, including musical theatre, acting, politics, economics, chemistry, biology and writing.

At an All-Faculty and Staff meeting in May 2021, interim provost La Jerne Cornish said moving the department would be a good way to explore the relationship between theater arts and music.

TenEyck said there has been a transition committee created to figure out the details of the new structure.

“The reorganization is exciting for us in theatre,” TenEyck said via email. “We already have a strong relationship with music, especially with opera & musical theatre, but this realignment offers potential for more collaboration. Initially this move will not have much impact on the day–to–day life of theatre students, faculty and staff, as the move is mostly administrative. As the two units work more closely together — I can imagine more collaboration and synergies emerging.”

Sophomore Chloe Beehm is getting her bachelor’s degree in music and has an outside field of theater. She said that on top of her requirements for her music degree, she takes 23 credits of classes in the theater arts program overall. She said she is excited for the transition and thinks that it makes sense.

“I hope that there can be some benefits for students in the School of Music, because I feel like a lot of us music students are somewhat theater kids at heart, but we somehow just focused more on music itself instead of theater,” Beehm said. “But, I think we all have those interests. I hope with this merge, we all can get equal opportunities from it.”

Beehm said she was concerned about the logistics behind the transition because she has not received much information about it. She said she was also worried about how adding more students to the music school would impact current students, especially regarding registration for courses.

“I feel like with how the School of Music works, or how they register for classes and curriculum, if you want this class at this time, you have to get on that, otherwise it’s going to run out,” Beehm said. “And I just wonder how much more competitive that’s going to be with musical theater students. … I just wonder how that will impact us regular School [of] Music students. This is the norm for us and now we might have to work around that, so I think that’ll be very interesting. I don’t know how they’re going to work that out.”

“We will definitely be under a different dean no matter what, and that certainly changes how things are run,” Danieli said. “But in terms of student perspective, I think a lot of students are saying, ‘Well, how does that change things?’”

She said she thinks there is a lot of overlap between the department and the School of Music, especially for students in sound design. She said she is personally excited at the prospect because she hopes it will make it easier for her to take music-based courses, but she has mixed feelings about how the decision was announced.

“I think the fact that they released it to us, but it’s still so up in the air about what it means, has very mixed signals,” Danieli said. “I feel like maybe there should have been a plan in place before it was released to the general public. … It’s just causing a lot of unnecessary stress and unnecessary tension that doesn’t need to be happening.”

Sophomore Becca Blacksten, an acting major, said she felt negatively toward the decision to move the Department of Theatre Arts. She said she feels the acting majors are not prioritized as much as the musical theatre majors.

Blacksten said she thinks the transition will make it harder for acting majors to take certain classes.

“But because we’re in the acting program, they don’t get the opportunity to do voice lessons,” Jamison said. “If you want voice lessons, you have to go find a voice teacher and pay for it out of pocket. And so a lot of people want to [take lessons] because in the professional world, a lot of musicals are not dance heavy. So you can be an actor who’s also just a good singer, and get booked in something really good. So a lot of people think that it’s very important as part of their training to be able to sing and have voice lessons, but it’s not readily accessible to us.”

Sophomore Noa Webner, a musical theatre major, said she was intrigued by the prospect of the merge, especially for opportunities that may be offered to both Dillingham and Whalen students. She said she wants to know if musical theatre students will be able to take longer voice lessons.

“I think it’s safe to say at this point that half-hour voice lessons can be frustrating at times and having a substantial amount of time to work with our voice teachers each week is an imperative component of our training,” Webner said via email. “Especially when you consider that most musical theatre B.F.A. programs across the country are able to give their students hour-long lessons, putting Ithaca students at a disadvantage.”

However, she said she feels like the college has kept students in the dark about the merger.

“What little we did hear about it was at a Dillingham performance major meeting at the beginning of this semester, in which faculty essentially stated some kind of integration between the two schools would happen in the Fall of 2022 and that even they don’t know exactly what it’s going to look like,” Webner said.