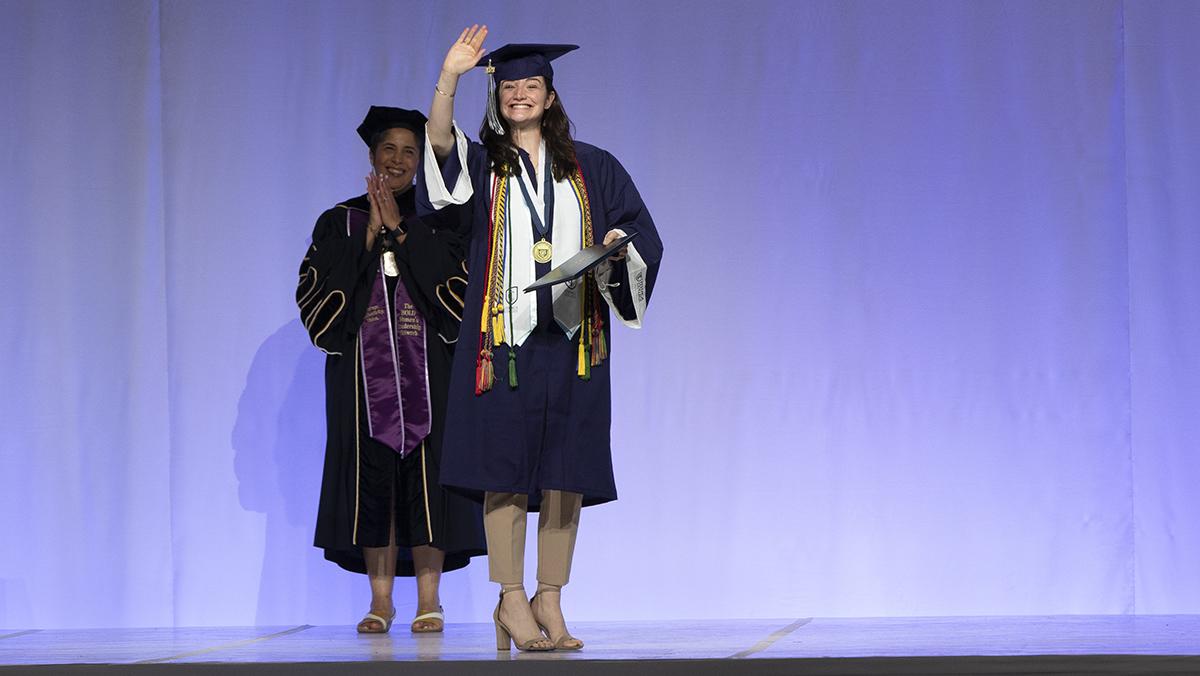 Arla Davis/The Ithacan
Catherine Fiore '21 walks across the stage in the Glazer Arena in the Athletics and Events Center and the Class of 2021 graduation.
By Syd Pierre — Assistant News Editor
Published: November 3, 2021

Following the recent announcement of the changes to the Class of 2022 May Commencement ceremony and to December commencement, some members of the campus community have said they feel happy about the changes, while others feel disappointed.

Interim President La Jerne Cornish said in an email to the Class of 2022 on Oct. 25 that the college will hold two in-person commencement ceremonies on May 22, 2022. The ceremonies will be held in the Glazer Arena in the Athletics and Events (A&E) Center. One ceremony will be at 9 a.m. and the other at 3 p.m., each with 650 graduates.

Students can pick which ceremony they would like to walk in. Information regarding signing up for a ceremony will be sent to the Class of 2022 in February 2022. The members of the Class of 2022 will be provided with six tickets for guests, Cornish said in the announcement.

Senior Chloe Levy said she was disappointed in some of the changes made to the commencement ceremonies, namely that students will have to find time to sign up for time slots and that students might not be able to walk at commencement with their friends.

“I know my friend is graduating technically in December, and she’s going to probably walk at the 3 p.m. one, even though it’s really inconvenient to like our families and stuff,” Levy said. “It’s better to know at least we’ll get to walk together, than not even get to see each other graduate because I mean, that’s just rough. They didn’t even consider our feelings and how much time we’ve spent with all of these people.”

Senior Monica Hammerl said her biggest concern with the changes are also the potential that she might not be able to graduate with her friends.

“My friends and I want to have the same time of graduation, because we’d rather graduate together then have to wait a period to go and see each other graduate,” Hammerl said.

Levy said the changes also complicate plans that her family had for commencement.

“My family plans on coming up at a specific time,” Levy said. “But now they might have to stay an extra day and that’s more hotel costs, and finding hotels is not the easiest either.”

Doreen Hettich-Atkins, executive director of the Division of Student Affairs and Campus Life,  said that when the college did allow unlimited numbers of tickets, they found the average was six or seven tickets per graduate. She said the biggest reason the college is splitting the commencement into two ceremonies is so that students can have more family members attend.

“If we were to only do one, the numbers of family members that would be able to attend would be significantly more limited than it is when we do two ceremonies,” Hettich-Atkins said.

Jack Powers, interim dean for the Roy H. Park School of Communications, said he did not have any concerns with the new structure of the two, in-person ceremonies.

“Over the past few years, we’ve had split ceremonies — some virtual, some hybrid/in-person — and I thought they went really well, so I don’t have any concerns about the new structure,” Powers said via email. “I say this as both an interim dean and as a parent of a Park School student who will be graduating this year.”

Senior Reed Pollard, president of the senior class, said he is actively involved in the planning process for graduation. He said he works with the commencement committee co-chairs to plan the programming and logistics for the event.

“I think it is truly a student-centered approach to a traditional graduation ceremony,” Pollard said via email. “The idea for two ceremonies was definitely a long conversation, but it allows each graduate to have a lot more tickets, so they can share the day with family and friends.”

Hammerl said she was confused by the decision to move the ceremonies into A&E because she feels like, COVID-wise, it would be safer to hold the event outdoors, rather than indoors.

Pollard said he is aware some seniors are disappointed about the decision to hold the ceremonies in the A&E Center, as opposed to Butterfield Stadium. Typically, commencement is held in one ceremony outside at Butterfield Stadium. However, Pollard said he thinks the decision to hold commencement inside at the A&E Center makes the most sense logistically for the college.

“The A&E Center is a state-of-the-art event space, filled with all the facilities that the college used to have to contract out to outside vendors,” Pollard said via email. “Also, when looking at security the A&E Center is much easier to secure and manage than the entire field.”

The college previously announced that, beginning in December 2022, students graduating in December would not be able to walk in the following May Commencement ceremony, but has since reversed its decision.

Hettich-Atkins said the college reversed the decision after hearing negative feedback from students and their families.

In an Oct. 25 message from the Provost’s office, interim provost Melanie Stein stated that “[the] decision has been reversed after hearing from several graduates and families about the importance of participating in the May ceremony.”

Hettich-Atkins said that moving forward, December graduates will be able to participate in the May commencement ceremonies.

“December graduates will be able to participate in either the May ceremony before their formal graduation or the May ceremony following when they officially complete their degree requirements,” Hettich-Atkins said.

Powers posted on Twitter following the announcement from the Provost’s office to reverse the decision.

“Kudos to @IthacaCollege and the Provost’s Office for this announcement. I can confirm that it’s been positively received by students,” the post stated.

Powers said, via email, he is grateful the Provost and college listened to students’ concerns.

“A number of Park School students came forward expressing their displeasure with the initial announcement because they wanted to celebrate graduation with their friends, even if they were graduating a semester earlier or later,” Powers said via email. “The reversal was well received by those students.”