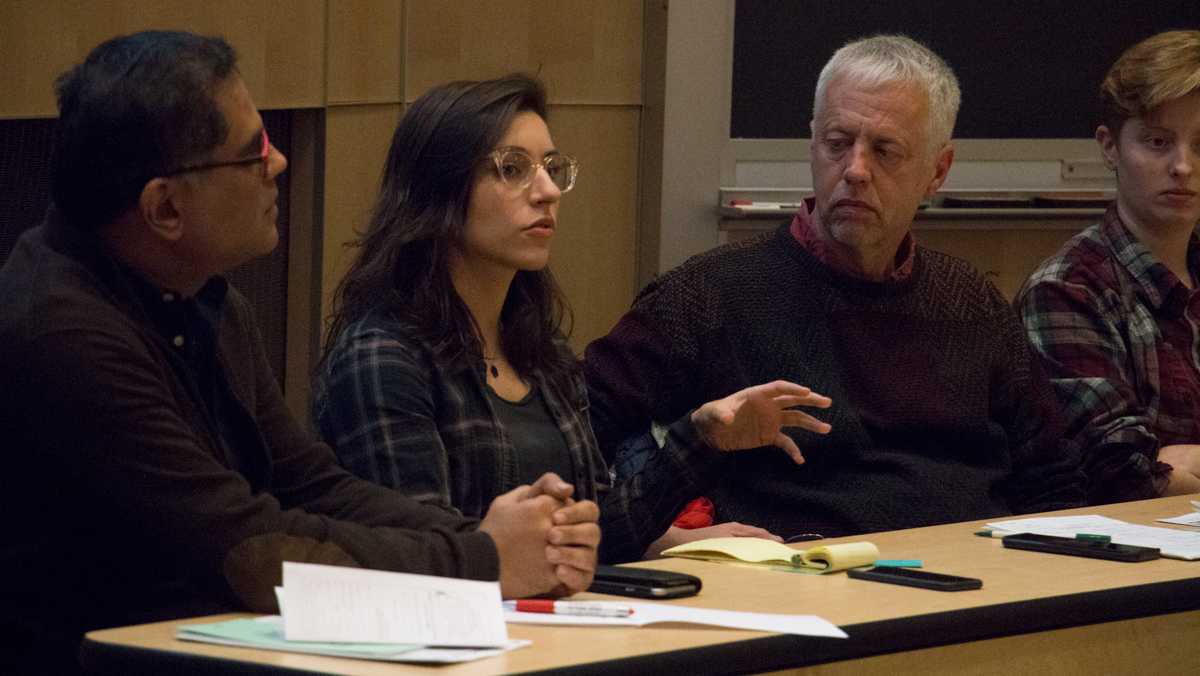 Julia Cherruault/The Ithacan
From left, Raza Rumi Ahmed, scholar-in-residence in the Department of Journalism; Sarah Grunberg, lecturer in the Department of Sociology; Pete Meyers, founder and coordinator at the Tompkins County Workers’ Center; and sophomore Lillian Rushing, a residential assistant at the college, spoke about worker exploitation at the SLA teach-in on Dec. 7.
By Meredith Burke — Staff Writer
Published: December 13, 2017

Six speakers discussed experiences that they said made them feel exploited in the workforce both inside and outside of the college at IC Students for Labor Action’s teach-in to critique the college’s work practices Dec. 7 in Textor 101.

The room where the teach-in was held reached its capacity with approximately 40 people in attendance.

Sarah Grunberg, lecturer in the Department of Sociology and a member of the Leadership Committee of the Ithaca College Contingent Faculty Union; Raza Rumi Ahmed, scholar-in-residence in the Department of Journalism; sophomore Lillian Rushing, a residential assistant at the college; Ellen David Friedman, a retired union organizer and volunteer at Tompkins County Workers’ Center; Pete Meyers, founder and coordinator at the Tompkins County Workers’ Center, an organization dedicated to helping organize unions and fight for workers’ rights; and freshman Luis Valderrama, who spoke in place of an anonymous product quality checker for a corporation who did not reveal their name or place of work out of fear of being fired, were speakers at the event.

She said that improving social issues begins with our local community and that student groups such as SLA have the power to make change at the college.

“I think it’s really important for you to know that you are the power of this institution,” Grunberg said. “You can create change, and you showed that through the support and allyship you have provided us with in the past few years.”

Junior Mike Hanlon, the president of SLA, said they believed the event was successful in achieving the organization’s goal of providing workers in the college community with a voice.

“The Students for Labor Action has been growing at a pretty quick rate,” Hanlon said. “We want to work in solidarity, not charity, with these workers.”

Meyers spoke about his experience working with the organization.

“We are very much about encouraging workers to start unions and really take ownership of their unions,” Meyers said.

The TCWC supported the contingent faculty protests that took place last year and have also taken action in the community by rallying, protesting and leading open discussions about creating a livable wage.

Rushing shared their experience of being a resident assistant for the college. Although they enjoy being an RA, they said, some requirements for and restrictions of the job were not stated in the initial agreement. Rushing said all RAs can work up to approximately 20 hours a week completing duties such as doing rounds, making bulletin boards, organizing events and taking office hours without additional compensation besides receiving compensation for room and board.

The Office of Residential Life has discussed additional stipends before but the office says it cannot afford it. Rushing said they want compensation beyond room and board for their additional time-consuming duties that many RAs are struggling to handle.

“I would hope that my work would be valued, and I could have some sort of stipend,” Rushing said. “Even a little bit would be great, but I don’t.”

Bonnie Prunty, director of the Offices of Residential Life and Judicial Affairs and assistant dean for first-year experiences, said that new RAs currently receive 75 percent compensation for their room and board and that returning RAs of three semesters or more receive 90.9 percent. However, she said, these percentages change yearly during the college budget approval process. The department was able to raise compensation for returning RAs by one percent from last year, Prunty said.

Ellen David Friedman, a retired union organizer and volunteer at Tompkins County Workers’ Center, said how capitalism exploits workers for profit and said workers must organize against the system in order to combat exploitation.


“There’s just one thing to do,” Friedman said. “You just turn to each other, and say, ‘When are we going to hold hands together and jump?’ That’s why the contingent faculty here are such a damn inspiration.”