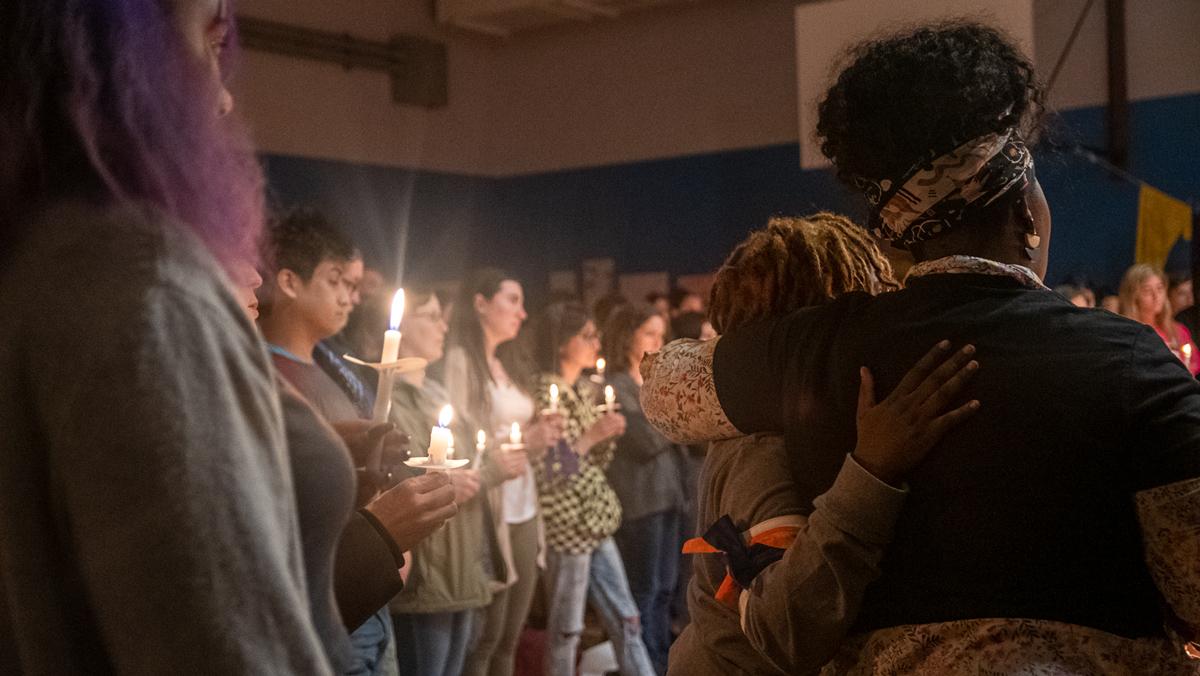 Kristen Harrison/The Ithacan
A candlelight vigil was held to support victims and survivors as well as those who have died as a result of sexual and domestic assault April 26 at the Greater Ithaca Activities Center.
By Helen Reyes — Contributing Writer
Published: April 28, 2019

“Together we fight to take back the night,” was one of the many calls to action that Ithaca College students chanted as they marched into the Greater Ithaca Activities Center (GIAC) on April 26 for the annual Take Back the Night rally and march.

This year marked the 40th annual Take Back the Night rally and march to unite the Ithaca community and raise awareness about sexual assault. This year’s theme was “Light Out of Darkness,” representing healing, empowerment and finding strength in the future. Approximately 30 members of the college community convened at IC Square and then carpooled down to GIAC, where approximately 100 members of the Ithaca community gathered later in the night. The event was originally supposed to begin on the college’s campus at the Textor Ball and move as a march down to The Commons but was rearranged due to severe weather. At GIAC, keynote speakers, musical performances and a vigil in honor of victims of sexual assault were held.

Members of Ithaca College Feminists United, a club focused on promoting social, political and economic equity for people of all genders, gathered at IC Square before the march. They chanted slogans like “Claim our bodies, claim our rights, take a stand to take back the night,” “My body my choice, my freedom my voice” and “Survivors unite, together we fight to take back the night.”

Junior Clare Nowalk, one of the organizers of the event, said that even if an individual has not been personally impacted by sexual assault, it is important for them to raise awareness about the issue.

“The way we treat each other and the way we regard our bodies and our relationships to what safe love looks like, those are all parts of what make up of how we perceive these issues and how we navigate them and how we treat others,” Nowalk said. “It’s important to take into account what people are going through and how you are contributing to that and how you can create safe places for them and even for individuals who don’t know.”

At GIAC, Deborah Mohlenhoff, 5th Ward Alderperson and Acting Mayor — meaning she performs duties when Svante Myrick, the elected mayor of the City of Ithaca, is out of town — read a proclamation on behalf of Myrick declaring that it is the community’s responsibility to bring an end to domestic and sexual assault. The proclamation focused on supporting oppressed groups — like native women, immigrants, LGBTQ victims, college students, youth and public housing residents — that are often made vulnerable due to victim blaming, patriarchy and sexism.

“We recognize all forms of sexual assault as acts of violence, where sex is used as a weapon, specifically highlighting the disproportionate level of violence faced by women of color, individuals with disabilities and the LGBTQ community,” Mohlenhoff read from the proclamation.

Leslyn McBean-Clairborne, deputy director of GIAC, was the keynote speaker. She told a story about her experiences growing up feeling objectified and realizing that something had to be done. Another of her stories included an experience in which she found herself objectifying other women and realized that she had to change her mindset to help empower other women.

McBean-Clairborne said that even though she now advocates for herself, she also fights for others who have been impacted by sexual assault and are too afraid or embarrassed to advocate for themselves.

“After years of my own life–altering experiences, I made the choice that I had to break the cycle,” McBean-Clairborne said. “I had to get into the light out of the darkness. … We have to not only do it for ourselves, but we have to do it for each other. Speak up — help take back the power for each other.”

The event also included musical performances with songs about empowerment, survival, acceptance and defining consent. The Clothesline Project, which commemorates victims of domestic and sexual violence by hanging T-shirts with messages from survivors, was also displayed at the event. The “Speak-Out” portion of the event gave victims and allies the opportunity to share their experiences with sexual assault as well. To end the night, a candlelight vigil was held to support victims and survivors as well as those who have died as a result of sexual and domestic assault.

Helen Reyes can be reached at hreyes@ithaca.edu