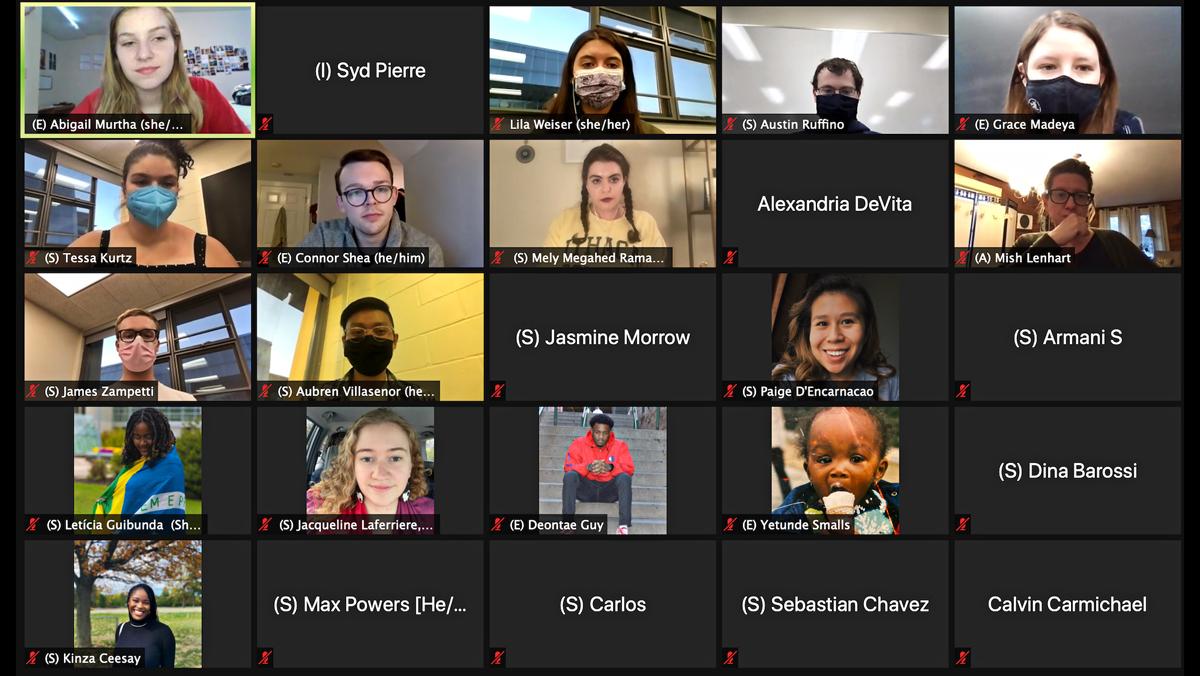 Courtesy of the Student Governance Council
The SGC expressed its dissatisfaction with the college’s response to anti-Asian violence during its March 22 meeting. Senior Agnes Scotti, Class of 2021 senator, said she does not feel that a statement is enough to address the issue of racism.
By Alyshia Korba, Syd Pierre — Assistant News Editor, Staff Writer
Published: March 25, 2021

After a March 16 mass shooting in Atlanta that resulted in the death of eight people — six of whom were Asian women — Ithaca College senior Hana Cho, co-president of the Asian American Alliance (AAA) at the college, has been experiencing extreme anxiety and has struggled to focus on their schoolwork.

Cho is a second-generation Korean-American and said they have been worried about their safety as well as their family’s safety.

“My mother is an essential worker in a white community, and I was already worried about her facing harassment during COVID,” Cho said. “Now, I am restless until she comes home.”

The shooter in Atlanta targeted spas and massage parlors owned by Asian people. Although the majority of the victims were Asian women, the shooter claimed the attack was not racially motivated. He said he has a sex addiction and targeted what he saw as sources of temptation. The police seemingly sympathized with the shooter, stating that he had a “bad day” and “was at the end of his rope.” However, many have made it clear that the shooting was an act of racist misogyny and hatred.

Cho said they have experienced many acts of discrimination and microaggressions because of their race. Although Cho does not identify as a woman, they have also experienced harassment and fetishization because they are often perceived as a woman.

“It’s obvious that the shooting is connected with the fetishization of Asian women, and I can’t help but wonder if the harassment I face will one day escalate to something similar,” they said.

Asian women have long been hypersexualized and fetishized in the United States. Media like the film “Full Metal Jacket,” the musical “Miss Saigon” and the opera “Madama Butterfly” all perpetuate harmful, racist stereotypes that contribute to the mistreatment of Asian women. The Stop Asian American and Pacific Islander (AAPI) Hate report found that from March 2020 to February 2021, AAPI women report experiencing hate incidents 2.3 times more than men.

The Senior Leadership Team (SLT) released a statement March 18 following the shooting that has been met with criticism from members of the college community. Some have said the college should have made it clear that the shooting was a hate crime against Asian people.

“While the motive for the Tuesday killings of six Asian women in the Atlanta area remains unclear at this time, it is evident that the targeting of members of Asian communities has increased across our nation,” the statement initially said.

Cho said they were disappointed by the SLT’s response to the shooting. They said they expressed this disappointment in an email to President Shirley M. Collado and received an apology.

“On behalf of the senior leadership team, I want to offer my sincere appreciation for your heartfelt and candid response to Thursday’s statement,” Collado said in the email to Cho. “We do understand that our message missed the mark and had unintended consequences. We apologize. While we revised our statement accordingly, that doesn’t erase the pain it caused, which you so eloquently describe.”

Cho said the original statement reflected claims made by the mainstream media that the shooter’s motives are unclear.

Sophomore Paige D’Encarnacao, Class of 2023 senator for the Student Governance Council (SGC) said in an interview she felt insulted that the SLT’s statement said the shooter’s motives were unclear.

“That was extremely hurtful to me because it was a racial driven mass shooting,” D’Encarnacao said. “When SLT said that it seems like they don’t believe that it was a racist incident.”

The SLT has since edited its statement, but it still does not identify the shooting as a hate crime. Cho said they wish the college edited its social media posts, which still say the motive was unclear.

“The connection the shooter had to COVID-related Sinophobia and anti-Asian misogyny is not lost on us,” the AAA wrote in its statement about the shooting. “We mourn the lives lost in an act of white supremacy.”

The U.S. has seen an increase in anti-Asian hate crimes since the beginning of the COVID-19 pandemic. Because the virus originated in China, Asian people have increasingly been discriminated against and have faced violence. Former President Donald Trump fostered anti-Asian sentiments throughout the pandemic, calling the virus the “Chinese virus” and the “kung flu.” Since the start of the COVID-19 pandemic, 31% of Asian adults in the U.S. have reported being targeted with racist slurs or jokes and 26% of Asian adults have felt like someone may threaten or physically attack them, according to the Pew Research Center.

The AAA is also holding a closed community meeting with the Center for Counseling and Psychological Services (CAPS) for members of AAA and members of the Asian American community to discuss the Atlanta shooting, Cho said. The meeting will be held virtually 6:30–7 p.m. March 25.

D’Encarnacao said she has been advocating for the college to release a statement about the increase in anti-Asian hate crimes since the beginning of February, and said the college’s statement was too late.

The SGC expressed its dissatisfaction with the college’s response to anti-Asian violence during its March 22 meeting.

Senior Agnes Scotti, Class of 2021 senator, said she does not feel that a statement is enough to address the issue of racism.

“I do feel like one of the problems that we have, especially with our administration, is that they kind of write these kinds of emails and then they kind of wash their hands of it, because they feel like they’ve done enough, when we have an entire Asian community on campus who needs to feel supported,” Scotti said.

Senior Connor Shea, president of the SGC, said the SGC was working on a statement but felt like it was not enough.

“We could release it, but, it’s like what more?” Shea said. “What is more? What action are we going to do, right? And that’s where I’m stuck … we’re continuing to edit a statement, but my hesitancy is, it’s just words. And is that what our community needs, or is there something else that SGC can be doing?”

Cho said the best way for the college community to support Asian people and Asian Americans is by standing in solidarity with all Black, Indigenous and people of color.

“Our struggles all have the same root of white supremacy, and sometimes it can be hard to remember that when individuals of color buy into the system of racism and attack other people of color,” Cho said. “To support the Asian community, you also have to support Black, Latinx, Indigenous, and migrant communities as well.”

Cho said that although the college is a predominately white institution, student activism — especially Black students’ activism — has helped improve the campus climate for students of color. As of Fall 2020, 4% of students, 3.3% of faculty and 2.1% of staff were Asian American or Pacific Islander, according to the Office of Analytics and Institutional Research.

“The Asian American population at IC is pretty small and obviously not all of us face the same severity of racism as Black and brown students,” they said. “I think that in general, Asian American students are not very well represented as a community but I believe that through the efforts of the students, we can create a stronger community and community voice for ourselves.”

D’Encarnacao said she appreciates the work done by student activists, but believes the SLT needs to do more to support them.

“I see that the students of color at Ithaca try really hard to make the campus a better place and feel more welcoming,” she said. “However, SLT never follows suit. The students of color would like a better campus but I definitely feel like SLT doesn’t want to listen to us.”

There will be a vigil and rally at 11 a.m. March 27 at the Shaun Greenwood Park in Ithaca as part of a national movement to end anti-Asian violence, violence against Asian women and white supremacy.