Students no longer allowed to store guns on campus 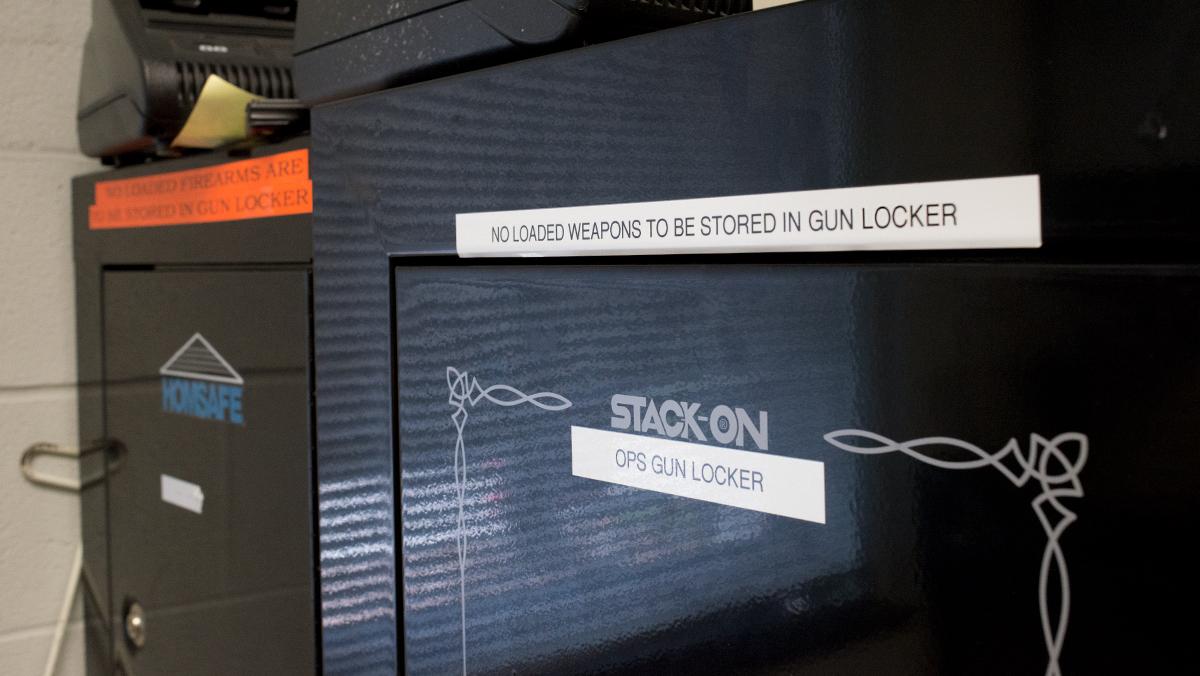 File Photo/The Ithacan
Ithaca College students could previously register and store firearms with the Office of Public Safety and Emergency Management, but no longer have this option as a result of changes in the Student Conduct Code.
By Phoebe Harms — Staff Writer
Published: November 26, 2018

Due to a recent policy change, students at Ithaca College can no longer store guns in the Office of Public Safety and Emergency Management.

The change was made to Section 7.1.2.3.5 of the college’s Student Conduct Code, which previously stated that weapons, including firearms, were prohibited unless approved by and stored at the Public Safety office. Now, that’s no longer possible Bill Kerry, director of Public Safety and Emergency Management, said. Kerry said he suggested the change because of the recent rise in mass shootings taking place across the country and that he felt having any guns on campus would be too much of a risk. Kerry proposed the change to Rosanna Ferro, vice president of the Division of Student Affairs and Campus Life, and Nancy Pringle, vice president of Human Resources, in February, which they then approved and passed a month after.

Only two students were storing guns when the policy changed and both no longer have their weapons on campus, he said. Ferro agreed with the change in policy.

“I concurred with the rationale provided by Public Safety leadership to make the proposed update to the policy,” Ferro said.

As of April, 320 people have been shot on college and university campuses in the U.S. since the Virginia Tech shooting in 2007 when 32 people were killed. Out of the 320 shot, 122 were killed and 198 were injured, and 148 of those shot were part of mass shootings. Additionally, 26 individuals have died by suicide using guns.

Although the college has never had an incident where a student did not follow the regulations for storing weapons, the college felt it was necessary to take the extra precaution, Kerry said.

“It just became too risky,” Kerry said. “With mass attacks on a more regular basis, we just felt that it was time to make the change.”

This is not the first time the college has responded to the increase in mass shootings in the U.S. Earlier in 2018, the college began offering training to help the campus community prepare for active shooter situations. These resources are available online to students, faculty and staff and include different strategies the community could follow if there was ever an active shooter situation on campus.

Kerry said neither of the students storing weapons on campus argued about the policy change and removed their weapons when instructed.

Junior Charlotte Steinberg said she appreciated guns being stored safely on campus but was happy with the decision to ban guns in general.

“It makes me nervous,” Steinberg said. “School shootings are so frequent now and can happen anywhere, especially when guns aren’t stored safely.”

Some students said they were unaware that they were able to store weapons on campus. Sophomore Karly Masters said she was surprised to hear that students were ever able to store guns in the Public Safety office and feels the decision to change the policy was a smart and safe one.

“I am disappointed to have not heard about this until now,” Masters said. “It makes me feel unsafe to know my peers had access to guns on an otherwise safe campus.”

Not all students agree with the decision to change the weapon–storage policy.

Senior Charles Kane said he thinks the decision will not make the campus community safer.

“To me, at worst, this is a missed opportunity to protect students,” said Kane. “Forcing those students to store their guns elsewhere around the Ithaca area would remove an opportunity for Public Safety to engage in the overseeing of gun–owning IC students.”

Store near Ithaca College is robbed at gunpoint