Connor Duffy, Eden Strachan, Giulia Villanueva/The Ithacan
The Roy H. Park School of Communications recently unveiled its new drone policy along with a series of training sessions to get licensed to fly them.
By Maggie McAden — Contributing Writer
Published: September 27, 2017

The skies above Ithaca College may soon become a new avenue for media production and a playground for drone hobbyists. The college will soon release an official drone policy which will allow licensed students to operate the flying machines on campus.

Bryan Roberts, associate dean of the Roy H. Park School of Communications, is drafting the policy with the Office of Public Safety and Emergency Management and the Office of the General Counsel. The college has purchased a fleet of five Phantom 4 Pro drones which will be available to licensed Park students as well as all licensed faculty and staff. This policy will follow previous efforts to draft drone regulations, which began in 2014 but never developed.

Students who are independently licensed outside the college and have their own drone may not fly it on campus unless they get confirmation from Public Safety, Roberts and the general counsel. Before the student can get approval, Roberts said, the college would consult with Bird’s Eye View, the company partnering with the college to teach drone workshops, before finalizing the decision.

Previously, Virginia Mansfield-Richardson, former associate dean of the Park School, had formed a working group composed of faculty, staff and students to draft a drone policy. However, the project was put aside when she left campus to accept a job at Hobart and William Smith Colleges. Roberts said that he picked up the project again this summer.

Roberts said the school will offer three workshop sessions that Park students and all faculty and staff can register for. The sessions, which are each three days long, began Sept. 22 and will continue through Oct. 22.  The next workshop will be held Oct. 6-8 and the third will be held for only faculty and staff Oct. 20-22. Students who participate in one session are then eligible to take the certification exam. Roberts said more workshops will be offered after Oct. 22 but the dates have not been finalized.

After completing the course, participants will have to take a government certification exam in order to get the FAA UAS 107 commercial license. The workshop covers the knowledge needed to pass the exam and hands-on training on how to fly a drone. The course and exam cost $150. After students pass the exam, which will be conducted at the Tompkins County Airport, they will have access to the drone fleet, which is complete with 4K video technology and anti-crash technology.

“I had a few drones, kind of over the spring and over the summer, and kind of evaluated their efficacy,” Roberts said. “[I] did a ton of research and then talked with students. I knew that students wanted this, so here it is.”

Drones Across The Nation

Drone programs are present at colleges and universities across the U.S., some of which offer degree programs in drone technology while others simply have certification exam preparation courses. 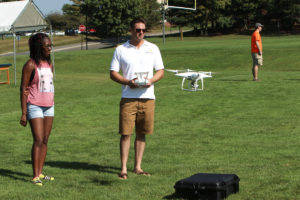 Embry-Riddle Aeronautical University in Daytona Beach, Florida, offers an Unmanned Aircraft Systems Science degree which covers all the elements of drone technology needed for employment in the field.

Other colleges offer certification exam preparation courses. Farmingdale State College in New York offered a series of six sessions in April that prepared students to take the exam but did not offer hands-on training. This is because the FAA does not require students who pass the exam to have had hands-on training prior to flying, according to the Farmingdale State website.

Park students at the college who pass the exam will be able to check drones out at the Park Portable Equipment Center and Services and fly them on campus.

Alan Schelter, a video engineer at the college, helped implement the drone program and said the drones will come in cases complete with batteries and chargers. He said that although each battery only allows a half-hour of flight time, the kits have enough batteries and one charger to allow students two hours of flight time per kit. The chargers also allow students to charge the drones while flying, he said.

“The major thing is being aware of airspace, being aware of all the different airspaces that you’re going to operating in because the FAA treats you like you’re a pilot now,” Apple said.

The workshops and drone programs are being primarily funded by a private donor. Roberts estimated that the program and classes currently cost between $12,000 and $15,000.

Women In The Industry

The first workshop, which occurred Sept. 22, contained six men and two women. The program is open to all who apply. Roberts said he considers drones a gender-inclusive technology, but that it is too early to tell if the workshops will remain imbalanced.

“I really can’t make any generalization or any comments on just that small sample,” Roberts said. “I don’t know if that is indicative of anything, to be honest. Obviously, we’ll look when the workshops are all said and done and we’ll see, but I think this is a technology that isn’t gender-biased by any means.” 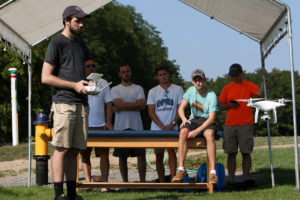 Sophomore Nikolas DiGennaro flies the drone while other students look on.
ELIAS OLSEN/ THE ITHACAN

Sophomore Ariana Ross participated in the first workshop and said that she was not fazed by the fact that there were more men than women.

“I do think more girls should get into it, and I think there is a specific reason why they don’t, but I couldn’t tell you what it is,” Ross said. “When I got in there, and I saw that it was mostly guys, I wasn’t even surprised.”

In a study conducted by BeaconSkySurvey, an aerial mapping and services company, less than 4 percent of FAA licensed remote drone operators were women among the 20,362 licenses issued from August to December in 2016.

Drones Outside The Park School

The college drone policy, which will dictate that flying drones on campus will be open only to Park students, has also caused some to question why it is not available to students from other schools.

Sophomore cinema and photography major Andrew Hallenberg has been flying drones since his senior year of high school and said he believes that although the new drone policy is definitely fair in terms of safety, the college should expand the drone license program to students in other schools in the future.

Senior business administration major Nicholas Skerpon said there are likely many students with creative capacity, like himself, with majors outside of Park that should have access to drones.

“My passion for communications and journalism hasn’t gone away just because I am studying marketing,” Skerpon said. “And I get what makes Park so great is the selectiveness, the getting-in, and it’s a great school, but I still think that there should be opportunities that Park gives, like drones, open to other students.”

Roberts said that in order to keep the program safe in the beginning stages of its creation, he wanted to limit it to only Park students to start to keep the groups of student–trainees small.

“To be honest, for safety reasons, I have to start it small, and I haven’t really received any interest from anyone outside of Park,” Roberts said. “I mean, it could be because we’re really nerdy. We really love technology.”

Stephanie Saias ’17 received a bronze medal in the August New York State Fair Drone Film Festival in the education category. The film, entitled “Experience Ithaca from Above,” features aerial views of both Ithaca and the college.

Saias, who is planning to get her commercial license soon, said drones can enhance film production but also present unique challenges. When she first began learning how to fly, Saias said that she often crashed her drone. Saias began filming with drones during her junior year.

“When you’re getting used to being able to use it, you crash a lot,” Saias said. “I’ve crashed it multiple times and had to get it fixed a lot but I’ve definitely gotten better at it. The advantages are that you get amazing footage, so that’s worth it.” 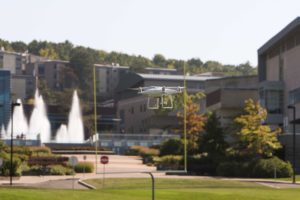 The drone is being flown around Lower Allen Field.
ELIAS OLSEN/ THE ITHACAN

Drones are also replacing traditional ways of capturing aerial views such as helicopters and cranes. Roberts said the college started looking into drones a few years ago after a student rented an expensive helicopter to capture footage of the Okefenokee Swamp in Florida.

Apple also said drones are extremely versatile tools to be able to operate in the media industry.

“It’s a very diverse tool that can replace a lot of different tools all at one time,” Apple said. “A production company that has $50,000 worth of technology can now be outclassed by someone who has a $3,000 drone.”

Adam Baker, director of multimedia in the Office of College Relations and Communications, said he has used drones for the past two years and is currently working with drones to create the college’s 125th–anniversary video. A video he recently worked on called “Ithaca Planet” used drones and a system of GoPros, called an “Omni,” to capture 360-degree footage.

“We had the gear and we thought ‘man, what if we put that on a drone?’” Baker said.

Baker said he got his commercial license last year in order to continue working with drones for filming.

“I got one last year because I work for the college, and by flying, I am doing commercial work, so I needed that to be legal,” Baker said. “I did fly for the college prior to getting a license because the FAA didn’t have a licensing process then because there were no rules.”

“I didn’t get in trouble,” Baker said. “I was flying, and in hindsight, I should have notified Public Safety, and that’s usually what I do. I had a crew here, a video crew here, [for] the 125th big video I’m producing, and it was a spur–of–the–moment thing, and we went up and someone called.”

Baker said he believes the policy, which is still in the works, will continue to develop after it is enacted.

“I still think it’s going to be a living document,” Baker said. “We are learning along with everyone else.”