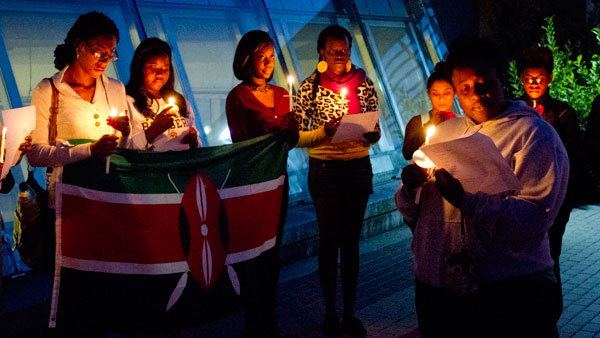 Candles glowed in the cool, fall air as members of the Ithaca College community stood in silence at a vigil, mourning the victims of the Westgate mall shooting that occurred on Sept. 21 in Nairobi, Kenya.

The vigil, which about 30 students attended on Sept. 29 at the Dillingham Fountains, was organized by the Ithaca College African Students Association. Senior Arit Ntekim, president of the ASA, said the group held the vigil to pay respect to the people who were killed in the attack.

The Associated Press reported that about 70 people were killed when the terrorist organization, al-Shabaab, attacked the Westgate mall. Al-Shabaab has described the attack as retribution for the Kenyan military’s deployment in Somalia.

Junior Steven Kobby Lartey, vice president of the ASA, said he was glad to see students of different ethnicities come to the vigil.

“It was nice to see a community of people who are not all African,” he said. “Asians, Africans, Americans came together to both celebrate and mourn those who unfortunately lost their lives last week.”

One of the ASA’s goals is to educate the campus community about issues in Africa, like this shooting. Ntekim said this event was one of the ways the ASA attempts to raise awareness at the college about African news.

“When there’s any sort of crisis, or when there’s good things coming out of Africa, we want to make sure that we’re making people aware,” Ntekim said.

The vigil began with poems read by ASA members. Ntekim said the poems were meant to set the mood for the vigil and educate participants about the events in Kenya.

During the vigil, students were able to share their feelings regarding the attack with the group. Senior Chinemenma Udokwu spoke during the vigil about how many people have become immune to the news of violence.

While many students who attended the vigil are from countries other than Kenya, sophomore Natasha Kirabo, who is from Uganda, said she thinks people from other African countries should especially continue showing support for Kenya.

“Uganda is right next to Kenya, and I have friends who go to Kenya, so this is personal for me,” she said. “I feel like we needed to have a vigil, because as Africans … we need to have a solidarity for other African countries.”

The vigil’s discussion expanded beyond the attack in Kenya. Participants were invited to talk about anything that was on their mind. Peyi Soyinka-Airewele, the group’s adviser and a professor of politics, said it’s important to take time to pay tribute to all the people who have tragically lost their lives during acts of terrorism throughout the world.

“We live with sorrow every day, and it is not often that we have the opportunity to come out and support each other,” she said. “I hope that there is no soul who leaves our community that we don’t take the time to appreciate their lives.”