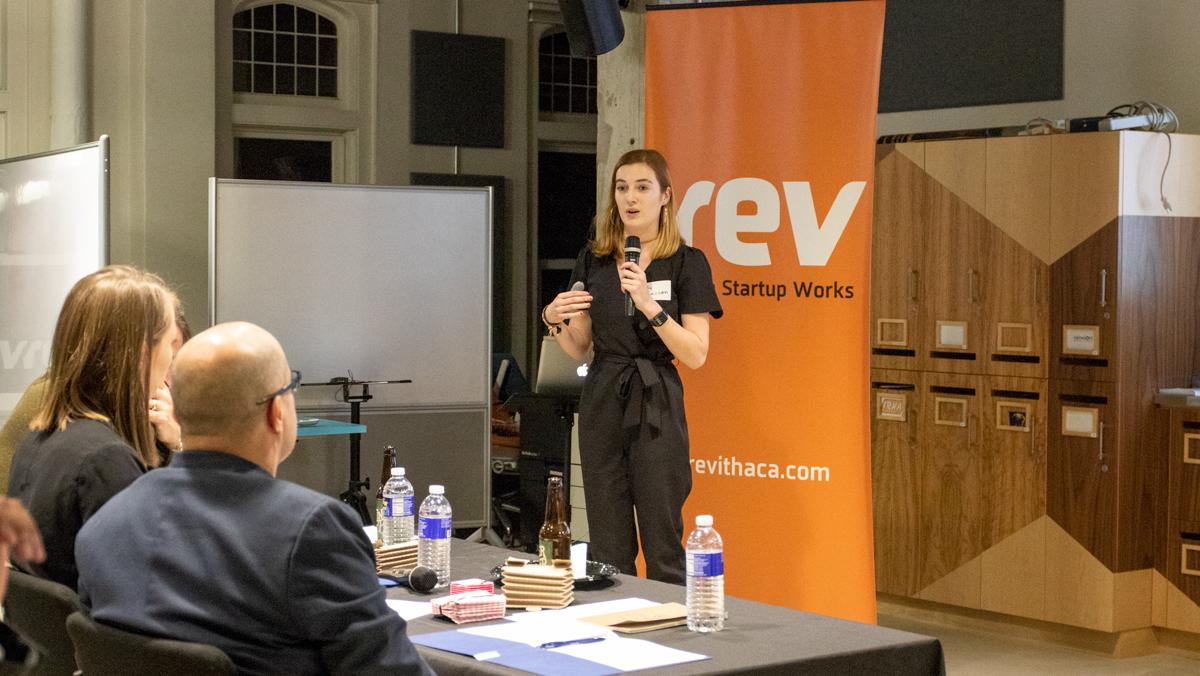 Julia Cherruault/The Ithacan
Junior Lily Dickinson presents her product Flatbox, a collapsible container for clean and dirty pocket tissues, to the judges. Her product was one of seven pitched at the third annual Demo Day held at Rev: Ithaca Startup Works on Nov. 13.
By Ryan Bieber — Staff Writer
Published: November 14, 2018

Each student group had the chance to win funds for their own businesses, and it was all part of the third annual Demo Day, an entrepreneurial competition for students at the college held at Rev: Ithaca Startup Works on Nov. 13.

Elise Steele ’16, executive director of Community Faith Partners; William Guerrero, vice president for finance and administration; and Brian Bauer, entrepreneur in residence at Rev, served as the judges for the competition and decided how the $5,000 prize would be divided among the groups.

Senior Nicole Marino, environmental studies major, won a total of three awards with her product, Twenty Eight, a travel cleaning kit for menstrual cups with an emphasis on sustainability and convenience.

Marino was awarded $1,525 from the judges and also received $200 for the Sustainability Award as well as an additional $200 for the Audience Choice Award.

Marino said that while she was confident in herself and her product, she was afraid the sometimes–sensitive subject of cleaning menstrual cups would make it hard to earn support.

“I think I worked really hard on my presentation, so I was expecting to get a little bit of support from the audience,” Marino said. “It’s a really hard topic to discuss to a lot of people. I wasn’t really expecting the resounding approval.”

Steele said Marino was given the most funding due to her clear-cut presentation and ideas for the future.

“She was very well–rounded,” Steele said. “She had a good plan, and she knew exactly how she wanted to use the money.”

Marino also competed in last year’s Demo Day and won a total of $700 for her other company, Positively Mystic, which sells affordable, durable Ouija boards.

Though the judges pointed out there are major competitors in the industry, the team said it aimed to set itself apart by creating a community for women centered around sharing diverse beauty products from around the world.

The three students came up with the idea for a project in their class about entrepreneurship and innovation and were encouraged to pitch their product at Demo Day.

Edward Catto, lecturer in the Department of Management, encouraged all of his students, including those involved with Verse Box, to compete in the event. Out of the seven teams, all but two were from his class.

“I’m thrilled by the students,” Catto said. “I’m inspired by them, too. They rolled up their sleeves and worked very hard.”

Cardinal, co-founder of Verse Box, said that though the idea was originally just an assignment for a class, the group wants to continue to work on the company.

“We came up with the product for the class, but it is something that we were actually willing to move on and pursue,” Cardinal said.

Bauer also said it was evident that the power of entrepreneurship was able to bring the college and community together.

“I was very impressed with the diversity of the pitches,” Bauer said. “The fact that they represent all five schools up at Ithaca College is great.”

Another pitch was made by junior Lily Dickinson, communication management and design major. Dickinson’s product was Flatbox, a collapsible container for clean and dirty pocket tissues.

Dickinson pitched her product last month at Park Tank and won $100. This time, she walked away with $500 to spend toward making new prototypes and speaking with a patent attorney.

Chris Marinaccio ’18 pitched the idea of creating a business to give baseball lessons to kids while incorporating technology to improve their skills. The long–term goal was to open a complete player–training facility. In the end, Marinaccio won $300.

Senior television-radio major Nick Gianni pitched his music–video company, Gickway, as a means to provide underground and new rap artists with their own quality yet affordable music videos. Gianni won $500 to go toward building a new editing computer.

The last group to pitch consisted of two physical therapy majors, junior Jonathan Ripic and senior Brandon Ho. Through their outdoor visual production company, Black Bridge Outdoor, the duo hoped to combine their love of physical therapy and the outdoors by creating unique how-to videos on hunting and other outdoor activities. The end goal was to open a rehabilitation center for disabled veterans that would help them transition to functional outdoor rehab. Black Bridge Outdoor won $600.

While addressing the crowd at the end of the competition, Sean Reid, dean of the School of Business, said he was proud.

“I was blown away by the quality of the presentations and the creativity of the ideas,” Reid said. “I’m glad everybody got a little something.”