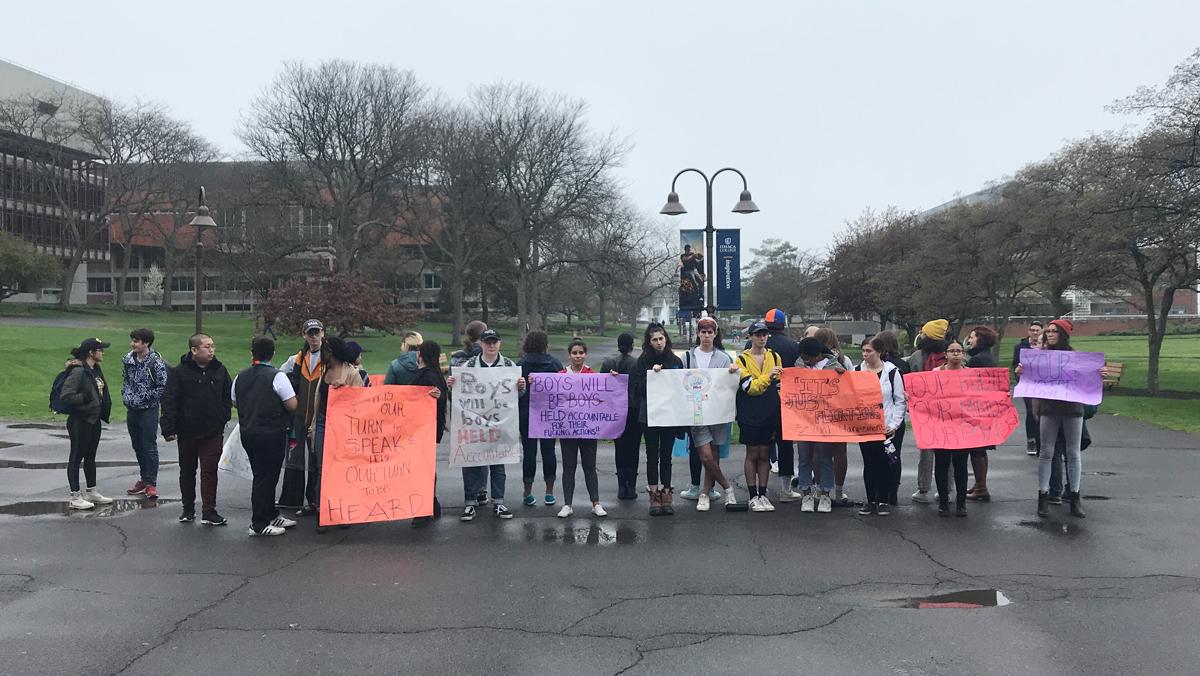 Kristen Harrison/The Ithacan
Members of OURstory is not HIStory gathered at Free Speech Rock outside of Campus Center to protest the sexual violence against women of color.
By Alexis Manore, Ashley Stalnecker — Staff Writers
Published: May 3, 2019

The protest, “Walk Out: The Fight for What’s Right,” was one event in a series run by OURstory is not HIStory: Femmes of Color Embracing our Truths, an organization that was created this semester by sophomore Yetunde Smalls and freshman Sofia Meadows-Muriel. Other events, held from April 15 to April 24, included a space for femmes of color to gather and reflect, a discussion on consent, a Q&A session about the process of reporting sexual assault and a discussion about toxic behavior in party culture.

Smalls, co-organizer of the event, said she would not speak to The Ithacan because Embrace Magazine, a student publication on campus that Smalls is the co-editor in chief of, was covering the event. Other organizers followed suit and refused to speak.

After approximately 20 minutes of gathering at Free Speech Rock, the group moved inside to stand in the middle of IC Square. The group chanted, “Hey hey, ho ho, sexual violence has got to go” and held signs that said, “Why is my body more regulated than guns?” and “Your voice has power.”

Meadows-Muriel, one of the organizers of the event and OURstory is not HIStory, spoke to the crowd of students eating and studying at IC Square. She said that sexual assault affects everyone, regardless of their culture or identity.

“In this space, we’re keeping each other accountable,” Meadows-Muriel said. “We can’t forget this. It shouldn’t have to be your sister, your mom, your aunt, your father, your cousin. You shouldn’t have to do that. It should be the fact that we’re human beings, and we’re all affected by these issues.”

Meadows-Muriel said women of color need space to heal from sexual assaults but do not know how to process the pain. She said that this was an educational event and that she is hoping to make change in the next four years.

After the event junior Kaitlyn Scott, a student sitting in IC Square, said she would like to become involved with this cause.

Sophomore Abby Hartwig, who was also sitting in IC Square, said the protest was moving.

“I kind of teared up a little,” Hartwig said.