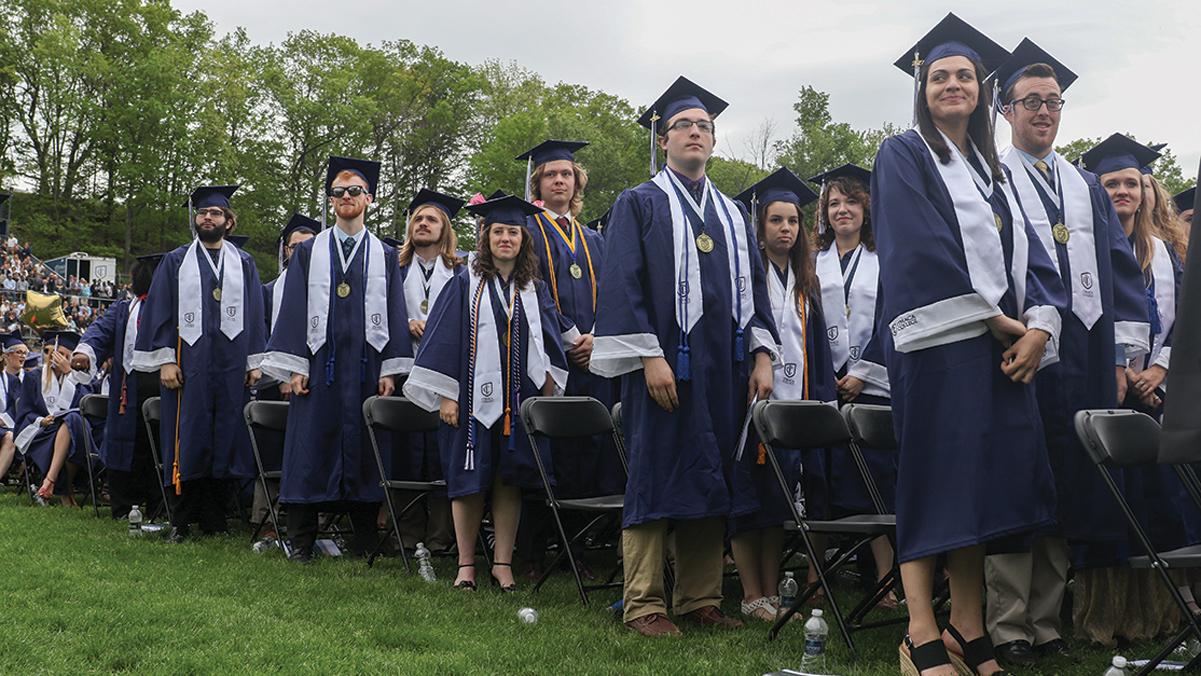 Connor Lange/The Ithacan
Members of the Class of 2017 stand as their school is called during Commencement.
By Ryan King — Staff Writer
Published: January 31, 2018

During Ithaca College’s Commencement on May 20, the Class of 2018 will become the first class in over two decades to walk and have their names read during the ceremony.

David Prunty, executive director of auxiliary services, who co-chairs the Commencement committee, said that the committee is still working out some of the logistical changes that will have to be made to ensure that everyone’s names are read without adding too much additional time to the ceremony.  Some of those logistical issues include whether the names will be read as the entire class body or names will be called broken up by the individual schools, but Prunty said that he anticipates that students will have their names read by school.

“As soon as we made the decision to go in this direction, the committee’s been meeting not every day, but close, to figure out all the implications of that decision,” he said. “There’s a lot of things that need to be figured out, both from a purely logistical perspective, and from a symbolism perspective.”

This change is a result of months of deliberations by the Ithaca College Commencement Committee. At the beginning of the fall semester, President Shirley M. Collado tasked the committee with developing logistical options for having names read during commencement.

During the fall semester, a group of parents created a petition on Change.org asking the college to let students walk and have their names read during graduation. The petition garnered over 2,150 signatures and prompted the Commencement committee to host a forum to get feedback on the issue.

In addition to the forum, the Commencement committee conducted a survey of over 2,600 parents, students, alumni and faculty. A majority of participants supported the decision to read names and let students walk during Commencement.

Prunty also said he anticipates that there will be an opt-out mechanism in place for students who do not want to have their names called or to walk during graduation, but that nothing has been finalized.

The Commencement committee does not have an estimate for how much time this change will add to the ceremony, but Prunty said that they are looking into cutting different components of Commencement in order to save time. One thing in particular that he said could be tweaked is the procession and seating, which currently takes about an hour.

“Year one is going to be an experiment,” he said. “We’re taking our Commencement ceremony that’s been in place for a long time, and making some pretty dramatic changes.”

Lisa Kleeman, a parent and one of the creators of the petition, said that she was really excited about the change. While her eldest daughter was not allowed to walk during her Commencement at the college in 2015, her youngest daughter, who is currently a freshman, will walk.

“It was great that it went through so quickly,” she said. “It just shows you that you can really make change … I am just really pleased that [Collado] wants to make changes to the school.”

Fatoumata Jallow, Class of 2018 president, has been on the committee since Collado asked it to explore the possibility of having students walk during Commencement. She said that she tried to remain neutral during the process in order to better represent her class, but now that the decision has been announced, she is excited. She is open to hearing feedback from students, she said.

“It does set a tone, and definitely says that Ithaca College is trying to be more student–focused,” Jallow said. “For me, it will definitely be an uplifting moment even if it is a mere 10 seconds, and I think that’s how it is for a lot of students.”

Senior Dustin Albino has attended the last two Commencements. He said that both ceremonies were very long, even without names being called. He said that he supports the decision to read names, but is concerned about how long the ceremony will take.

“I like it because it’s recognition for the years that we’ve been here,” Albino said.

Junior Mason Wilhelm said he has mixed feelings about the decision, but hopes that after this coming Commencement, the college will learn how to make the process better for when his class graduates.

“It’s good in the sense that each student that worked so hard to get their degree will get recognition for all their hard work and perseverance,” he said. “But at the same time, it might not be the best way to do it, because it might take a little bit longer than most people anticipated.”

Senior Marieme Foote said that she wants the names to be read during smaller school ceremonies, but not as an entire class body. She said she would also support cutting some traditional components of the ceremony to preserve time.

Senior Karielle Williams said that she was initially not planning on attending Commencement, but changed her mind after the college announced the decision to read names during the ceremony.

“I have family coming from out of the country … and the whole purpose is to have 10 seconds of walking across the stage,” Williams said. “I think before that there was no reason to go to graduation because there was no reason to sit through speeches.”It is unclear how long the college has gone without reading student names during Commencement, but Prunty said it has been that way for at least two or three decades and possibly longer.

Correction: The story incorrectly described how the 2018 Commencement ceremony will be structured. It originally said there would potentially be individual ceremonies by school.