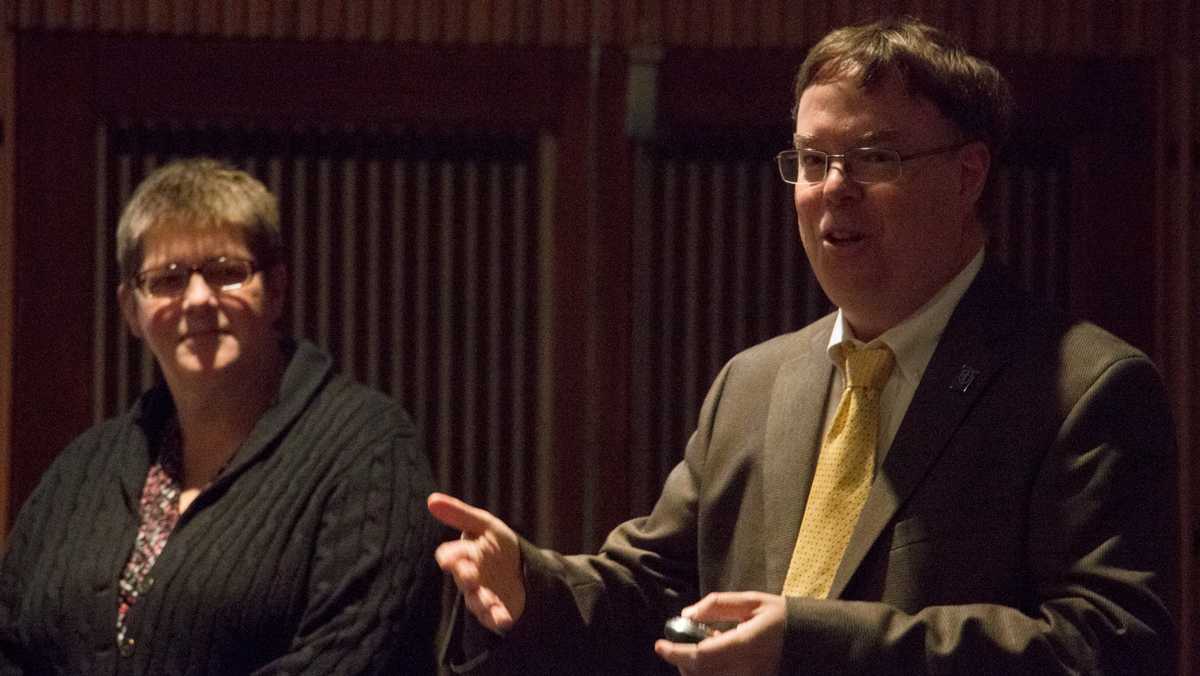 Julia Cherruault/ The Ithacan
Doreen Hettich-Atkins, coordinator of special services and programs, and Dave Prunty, executive director of auxiliary services and a co-director of the Ithaca College Commencement Committee, held an open forum Nov. 15 for students, staff and faculty to discuss possible changes to the ceremony and for attendants to propose their own ideas on how to change it.
By Meredith Burke — Staff Writer
Published: November 29, 2017

The Ithaca College Commencement Committee has started searching for feedback on how to improve the college’s Commencement ceremony.

The committee sent out a survey Nov. 14 to students, alumni, faculty and members of the administration. It was also sent to parents of current and prospective students, and parents of alumni. The survey asked what parts of graduation the survey-takers cared about and what they thought of the current debated changes.

The survey closed Nov. 22. It included a spot for participants to type in their own suggestions for the ceremony.

David Prunty, executive director of auxiliary services and a co-director of the committee, said he expected the survey to be an outlet for people to discuss what they want.

“The survey will hopefully give us a lot of information,” Prunty said. “We’re trying to offer multiple venues for people to express their opinion.”

The committee held an open forum Nov. 15 for students, staff and faculty to discuss possible changes to the ceremony and for attendants to propose their own. The forum included a presentation about what happens during Commencement and the Commencement planning process. The floor was then opened to students and faculty to voice their opinions.

“We’ve been charged by the president to look at how we might possibly add reading names and giving individual recognition to graduating students,” he said.

Collado stated that when she first arrived at the college, she was curious why there was not individual recognition during the ceremony. Since individual recognition is common at many universities and is usually something that both graduating students and their families look forward to, she charged the committee to try to find a logistically sound way to include it in the college’s own ceremony.

The issue garnered attention two months ago when the parents of both current students and alumni of the college created a Change.org petition asking to allow students to walk at graduation. The petition gained signatures quickly and currently has 2,150. After the feedback from the article The Ithacan published in October about the petition, Prunty said it was clear to him that the committee needed to hear the opinions of the community before making recommendations to Collado.

“It would be irresponsible of us not to seek input,” Prunty said.

The current ceremony takes about 60 to 75 minutes, and graduating students are permitted to sit anywhere in the designated student seats. In the event of rain, the ceremony is moved from Butterfield Stadium to the Athletics and Events Center. This downsizes the amount of seating available to the point that most students would not be able to bring their entire families.

There is a limited amount of spaces where a ceremony could be held, Prunty said, as other options such as the Park Auditorium or the Emerson Suites would not have enough room for an entire school’s ceremony. Prunty said if all the students’ names were read at the ceremony, it would add an additional three to four hours to the current hour and a half-long ceremony.

During the forum, both faculty and students suggested various compromises, including the idea of holding multiple ceremonies divided by school in addition to a large ceremony for the whole college. It was suggested that students would attend smaller ceremonies for their respective schools where their names would be read, and then the entire college would meet up for the conventional Commencement ceremony. This addition would extend the celebrations for a few additional days.

Senior Charlotte Robertson, off-campus senator for the SGC, said she supported the idea. She said it would satisfy both parents and students, while also not adding a large amount of time to the collegewide ceremony.

“I think a lot of our parents would be really pumped to see this happen,” she said. “I think a good way to do it is breaking it down by schools … maybe that could cut down on the time.”

While this option was the most acknowledged, it was still faced with significant opposition. Attendants’ concerns included people not attending both ceremonies, not having enough space to host the ceremonies on campus and people not staying for the entirety of the name readings.

Senior Fatoumata Jallow, senior class president, voiced her concerns about this alternative at the forum, mentioning how she has had personal experience with her family struggling to find travel and board accommodations to attend her graduation. She expressed this would likely be similar for other families who were traveling from far away.

“Usually the [hotel] reservations are made two years in advance,” she said. “Even my parents, who tried making reservations this year … are having trouble because rates are just skyrocketing.”

Mark McCoy, assistant manager at Super 8 Ithaca, said the hotel is normally completely booked during the college’s Commencement weekend and that they do raise their prices. However, he also said that they only take reservations a year in advance, so the hotel is typically booked six months before graduation.

Another suggestion made at the forum was to have individual recognition given visually, displaying the names of graduating students and the honors they received on a screen during the ceremony. This was suggested as a compromise between the two sides since the display would take less time than the reading of names.

Senior Stefanie Bennett, a member of the committee, said she was pleased overall with how the forum had gone, and that she was grateful for the contribution to the committee’s ongoing debate.

“I think we got some good opinions from both sides,” Bennett said. “I hope we can, definitely, as a committee, come up with two solid options to meet the charge that we were given by the president.”