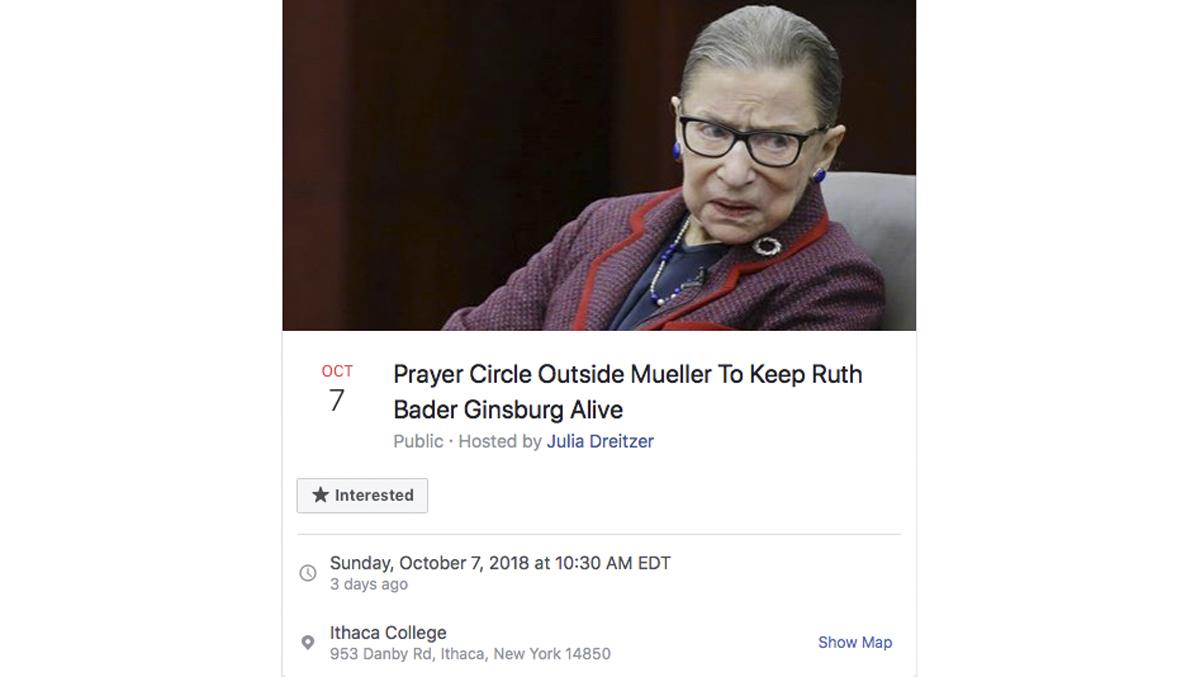 photo via prayer circle outside mueller to keep ruth bader ginsburg alive facebook event
Ginsburg is the oldest justice on the United States Supreme Court at 85. While she has taken many steps to try to prolong her life, including a rigorous fitness routine, many of her fans fear that her days are numbered. This fear has been heightened for left-leaning college students after the recent appointment of Brett Kavanaugh to the Supreme Court on Oct. 6.
By Ryan King — Staff Writer
Published: October 10, 2018

It was a cloudy Sunday morning in Ithaca on Oct. 7. A small group of students on campus gathered near Muller Chapel to pray.

This was not a typical religious demonstration — the students were praying that Supreme Court Justice Ruth Bader Ginsburg stays alive, at least until President Donald Trump leaves office.

Ginsburg is the oldest justice on the United States Supreme Court at 85. While she has taken many steps to try to prolong her life, including a rigorous fitness routine, many of her fans fear that her days are numbered. This fear has been heightened for left-leaning college students after the recent appointment of Brett Kavanaugh to the Supreme Court on Oct. 6.

The United States news cycle became dominated by the Kavanaugh appointment when three women came forward with allegations that he engaged in sexually abusive or harassing acts. One of the women, Christine Blasey Ford, testified before the Senate Judiciary Committee about an alleged experience she had with Kavanaugh in high school when he pinned her to a bed and tried to sexually assault her. Kavanaugh denied the allegation in his own testimony.

Freshman Julia Dreitzer, who organized the prayer gathering, hopes that Ginsburg stays alive long enough to be replaced by a like-minded judge. She said this event was in response to Kavanaugh’s confirmation to the Supreme Court.

“I organized this because I called my mother in tears after the Kavanaugh vote, and she told me that my friends and I should pray for Justice Ginsburg,” she said. “My mother has been a social worker, and I did it because I care about my rights very, very deeply, and I also wanted to make my mother proud and lead by her incredible example.”

Dreitzer said she was hoping for a bigger turnout. She said she was angry when she read that Republicans were optimistic that Kavanaugh would become a justice.

“I just kept asking how could somebody possibly feel optimistic about an alleged rapist fulfilling a position about one of the highest and easily most permanent positions in the country,” she said.

She said her anger has compelled her to make sure she and others vote in the midterm elections this November.

Dreitzer was not alone in her reaction to the Kavanaugh controversy. Hundreds have been protesting his appointment across the country, including demonstrations of people who lined the steps of the Supreme Court on Oct. 6 to protest Kavanaugh’s appointment.

Senior Madeline Horowitz said Ford did not get justice in her Senate hearing and the FBI investigation into Kavanaugh.

“His temperament in the Senate was unbelievable, and she was completely calm the whole time when she was the one reliving her trauma,” she said. “There were also some [factors] that prevented the FBI investigation from being more thorough, which could’ve benefited Dr. Ford and her fellow victims.”

Senior Anna Gardner wrote an op-ed in The Ithacan emphasizing the importance of believing survivors after Ford’s allegations came to light before Kavanaugh’s confirmation. In a subsequent interview, she said she was disappointed in how the situation had played out.

“It’s supposed to be a nonpartisan position, and I think it was very politicized by the people around him,” she said in the interview.

She said that she was also concerned about how Ford was treated during the process and what that could mean for other survivors.

“Christine Blasey Ford put herself out there to no avail,” Gardner said. “I think it’s just very frustrating for survivors and allies of folks who have experienced sexual assault. It’s extremely discouraging, but I hope it will motivate people to continue to be involved as a citizen — that’s about all we can do.”

Political groups on campus also weighed in on the Senate hearing and FBI investigation outcome.

Ithaca College Young Americans for Liberty said it was opposed to Kavanaugh’s nomination from the beginning due to his record on the Fourth Amendment. It cited some of his rulings in United States v. Askew, and United States v. Jones, in which Kavanaugh was in favor of giving law enforcement certain seizure powers without a warrant.

“We did not support his nomination, and we would have preferred a judge to be nominated who has a stronger stance on liberty,” the organization said in a statement. “Our stance against his nomination was determined prior to the allegations.”

Ithaca College Democrats also said it was opposed to his nomination and was upset with how the hearing and investigation were handled.

“We are disappointed that the U.S. Senate voted to confirm Mr. Kavanaugh after a rushed and partisan process after critical issues were raised about his impartiality, temperament and history of sexual assault,” it said in a statement. “In the important era of #MeToo, Senate Republicans have shown that serious and credible abuse allegations do not disqualify you from a seat on the Supreme Court.”

The Ithaca College Republicans declined to comment on the matter.