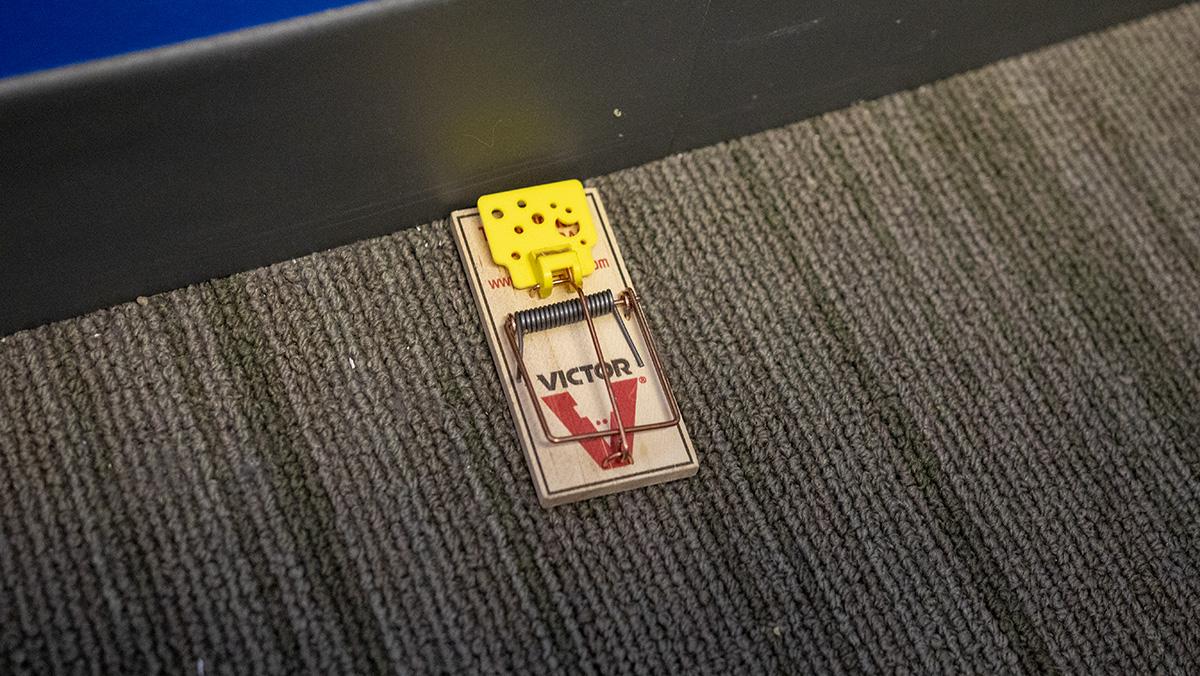 Holly Geyer, a freshman living on the second floor of Hood Hall, saw a mouse running across her roommate’s bed after returning from a hike Sept. 7. She said the mouse had been getting into the food in her Hood Hall dorm room, but this was the first time she had seen the mouse with her own eyes.

Students had witnessed mice in buildings on the Ithaca College campus in April 2019, as previously reported by The Ithacan. Now, in Fall 2021 the issue persists both in residence halls and academic buildings. Two videos of Geyer’s encounter posted on the Barstool Ithaca Instagram account drew attention from students. The following day, the account posted two more videos of mice in the Center for Health Sciences.

“I hadn’t realized that there were mice in our building yet and I was surprised to see it, because usually when there’s mice, they’re pretty good at hiding in my experience,” Geyer said.

After finding the rodent, Geyer said she filled out a maintenance request and staff quickly arrived to set out traps.

The second floor of Hood Hall has had a consistent mouse issue this semester, sophomore Resident Assistant Nick Jones said.

“There was actually space between where the drywall starts and where kind of the furnace is in the room, and that’s actually where the mice were getting in,” Jones said. “What’s a bigger problem to me is that the mice were able to get from room to room so it wasn’t just confined into one room.”

Jones said he was warned of a mouse problem on campus in previous years, but it was not made clear where the sightings occurred.

Freshman David Diaram, who also lives on the second floor of Hood Hall, said he found a mouse in his room about a week prior to Geyer’s encounter.

“It’s gross.” Diaram said.“That was the last thing I expected when I walked in my dorm and I was like, freaking out, … I was not expecting to see a little mouse when I opened my door.”

Although this issue is shocking to many students, the Office of Facilities is familiar with the situation.

“It is not uncommon to have reports of the sighting of a rodent in a building on campus,” Tim Carey, associate vice president for the Office of Facilities said. “Most commonly these sightings occur in buildings that are closest to wooded or undeveloped areas of campus.”

Hood Hall’s location in the Upper Quads places it in relatively close proximity to the edge of campus, where much of the land is wooded.

In order to tackle the ongoing issue, facilities staff set and monitor bait boxes outside of campus buildings, Carey said. Bait boxes are devices that store chemicals to kill mice and are typically sealed to keep other animals and humans away from the material, according to the U.S. Environmental Protection Agency.

Students living in residence halls can avoid interactions with mice by ensuring doors that might allow the animals into the building remain closed and food is not being stored in open containers, Carey said.

The Office of Facilities also closes off and continues to monitor possible building entry points, traps and rodents that do get into buildings and works with state–licensed pest control contractors, Carey said. He did not mention whether the office has made any changes to these policies since 2019 or plans to in response to recent events.

Some students said they are understanding of this consistent issue and believe it to be a product of the location of the campus and its dorm buildings. Mice are common across North America, and frequently live close to humans, according to the Progressive Animal Welfare Society. They naturally live in forests or grasslands and are attracted to human food.

Protected natural land makes up over half of the college’s property; most of this area is forests, as well as featuring shrublands and meadows, according to the college’s Natural Lands website.

Geyer said that growing up she was used to mice, because her family lives near the woods.

“I think that mice problems might not be something that you can really get rid of, especially like, living near the woods and stuff,” Geyer said. “I know a lot of people have kind of been freaked out by it but I think it’s natural, especially with the changing seasons.”

Jones said he felt that the mice deserve some amount of respect as they live in this space as much as students do. He said he organized a funeral service for two mice that were caught and killed in the traps set by maintenance.

“It was very respectful for the mice,” Jones said. “We gathered in the lounge … And we ended up, you know, speaking some words about the mice and how we respected them, and I sang Amazing Grace because I’m a voice major and then we had a procession”

However, other students consider the consistency of this issue to be more problematic.

Junior Ian Ertel lived in Hood Hall two years ago and said he faced problems with mice during that time.

“I understand as it gets colder, there’s going to be issues with that because they’re trying to get inside, all that stuff,” Ertel said. “But generally, I think … you shouldn’t really have it happen here. Like, I feel like the school needs to be more proactive about it.”

Mice are linked to a number of diseases that can be transmitted through both direct and indirect contact with the animals, according to the U.S. Centers for Disease Control and Prevention.

“Seeing this happen again in the same dorm makes me think that they’re not like actually addressing the problem correctly, and that they’re sort of just … putting a Band-Aid over … a bigger problem,” Ertel said.

Students living in Terraces have recently complained about mice in their rooms.