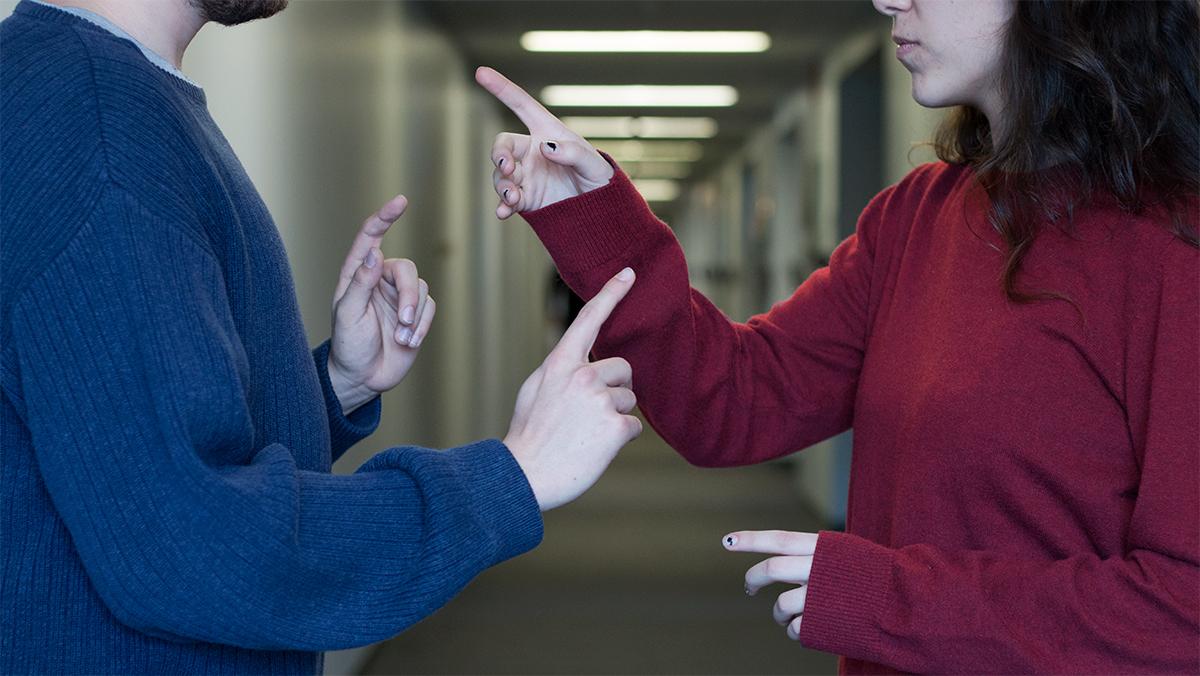 Perry Benedict/The Ithacan
Conservative and liberal students have known to clash in the classroom at Ithaca College but the intellectual diversity debate has taken a new spin since the presidential election of Donald Trump.
By Grace Elletson, Samantha Mendiguren — News Editor, Staff Writer
Published: February 15, 2017

Preceding the presidential election, many of Donald Trump’s supporters were not timid about supporting him publicly. But on college campuses, many were known to hold their tongues.

Following Trump’s victory, a debate over intellectual diversity has reappeared in collegiate settings. After the election, a website called Professor Watchlist launched to “expose and document college professors who discriminate against conservative students and advance leftist propaganda in the classroom.” Recent protests have broken out at numerous colleges over Milo Yiannopoulos, a senior editor at the far-right publication Breitbart News, and his speaking tour titled “The Dangerous Faggot.”

Colleges are known to be predominantly liberal institutions, and Ithaca College is no exception to the stereotype, according to students and professors. However, the debate over the lack of intellectual diversity at the college has some questioning how much of an impact it has.

Darren Linvill, director of Basic Courses in Clemson University’s communication department, has studied how faculty bias in the classroom affects students. He said the intellectual diversity debate first emerged in the 1950s. In the early 2000s, the movement strengthened, he said, when politicians began pushing legislation to protect intellectual diversity in colleges, most of which was not successful. Today, the debate is taking on a new shape as academics are being challenged to question whether hate speech should be free speech with the rise of alt-right politics in the United States and Europe.

One of the most well-known problems with the predominantly liberal climate at the college is the absence of right-wing ideological representation. Roger Custer ’04, former chair of Ithaca College Republicans, made an effort to increase the range of perspectives on the political spectrum at the college while he was a student. Custer said he felt most classes he took at the college included readings about feminism, postmodernism, Marxism and socialism, which were not matched with an equal amount of conservatism, free market ideas or even classical liberal theorists.

Deprivation of diverse viewpoints on these topics led him to explore alternative ideologies.

In a 2004 report Custer published publicly for the college community to read, “The Case for Intellectual Diversity,” he presented documented institutional bias toward liberal teachings. For example, the report cited a study conducted by the Ithaca College Republican group that found many professors at the college identified as liberal and that most guest speakers brought to the college represented liberal viewpoints. The report outlined how other types of diversity, like racial and cultural ideas, were often represented at the college, but intellectual diversity was often absent from the college’s initiatives.

“The purpose of higher education should be to teach you not what to think, but how to think,” Custer said. “And part of knowing how to think is that you understand where other people are coming from and why they might think that and then form your own view based on that.”

Junior Kyle Stewart, another former president of IC Republicans, also said that while professors do encourage debate within the classroom, they tend to only explain political theory from liberal angles. Stewart, also a political columnist for The Ithacan, said he thinks that when only one side of an argument is included, it’s a disservice to students because it leaves them without the ability to fully interpret political values.

Being one of the few conservatives on the campus, Stewart said he analyzes the classroom before voicing his opposition in an effort to find the best way to present his stance on the ideas being discussed. He approaches discussions by bringing the two sides together on points he agrees with, then expanding on the proposed ideas with an alternative solution, Stewart said.

Renee Brown used to be a student at the college before she transferred to Temple University — a move she made because she said she felt her conservative views were not welcome in the college’s liberal climate. In Brown’s freshman classes at the college last year, she said, professors often exposed their support for democratic policies in a subtle manner. However, sometimes she said she felt her professors promoted students to vote liberal in both local and national elections. The most aggressive attacks toward conservative ideas were initiated by other students in the classes, Brown said.

“I couldn’t support anything, and I couldn’t put my two cents in and argue back because I was afraid to,” Brown said. “I emailed my professor and told him that I have opinions that differ from what was being talked about in class, but I was actually afraid to admit it.”

After the email, Brown said, nothing about the political climate in the class changed.

Donald Beachler, associate professor in the Department of Politics, said the political divide nationwide may be the cause of political divisiveness that is seen on campuses. Beachler said he views Trump as a provocative figure, but one that has stimulated more enthusiasm in civics and has influenced students to take a political position.

“I don’t know that it needs to be repaired,” he said. “I think it reflects genuine differences among portions of the population.”

“When campuses say diversity, what they mean is racial diversity,” Beachler said. “There is no interest in intellectual diversity. People would rather not hear, by and large, the people they don’t agree with.”

Michael Smith, associate professor in the Department of History, said he recognizes that the nation’s political rhetoric has become uglier and that he has heard students vocalize that it can be challenging to express their conservative opinions on campus. But he said he thinks many, if not most, faculty members try hard to make all students feel open to express their thoughts.

“I don’t think there’s any question that the liberal perspective dominates on campus among students and faculty,” Smith said. “But there is a responsibility to make sure that the people who don’t have that perspective don’t feel excluded, but that can be challenging, too, because feeling excluded is very subjective.”

Junior Colby Daboul, president of IC Democrats, said that with such a divide between the two parties, liberal campuses tend to create an echo chamber that is unwelcoming to alternative thought, which is why he thinks students need to take advantage of opportunities to share their political perspectives. Classes like “Ideas and Ideologies” — currently taught by Kelly Dietz, assistant professor of politics — along with organizations like IC Democrats and Republicans are some avenues students should pursue to make their opinions heard, Daboul said.

“Having things like IC Democrats and IC Republicans can really engage with the student body and bring it a step further,” Daboul said. “I think that when you have things like that going on, then you begin to foster a more intellectually and ideologically diverse campus and climate.”

Sophomore Lucas Veca, a politics major at the college, said he has also experienced the outward bias professors show for the left.

“When Hillary ended up losing, one of my professors came in wearing all black,” Veca said. “I’m not sure if it’s their place to be talking to students about their views and making it seem like they’re the only acceptable views in the classroom,” Veca said.

Veca said he has experienced a few classes at the college that have not been inviting toward right–wing ideas and that those who challenge the majority are leaving themselves open to ridicule.

“It would be nice if there was a little bit more attention focused on ideological diversity instead of just racial and ethnical diversity,” Veca said.

Across the valley from the college, Cornell University is also experiencing its own political divides. The Cornell College Republicans club invited former Sen. Rick Santorum to give a speech Nov. 30 at Cornell that was disrupted by a group of protesting students, which has been cited as an example of liberal intolerance. Cornell sophomore Olivia Corn, the club’s chair, organized the event and said she was frustrated with her peers for their refusal to listen to conservative views.

The progressive climate has not only been affecting the Ithaca community but many other colleges and universities across the country. Professor Jonathan Roth of San Jose State University said he thinks the problem is embedded in the increasing number of people shifting to the far left extremity.

San Jose State is planning to host a celebration for the Black Panther party, which Roth said he believes to be an unfair representation of the African–American community due to its revolutionary promotion of separatist and anti-Zionist positions. Roth, who identifies as liberal, said he is not opposed to the discussion of such controversial topics. However, he said liberal ideologies overwhelmingly outweigh the conservative, leaving other outlooks to be suppressed and dismayed.

Matt Lamb is the director of Campus Integrity, a free–speech advocacy group established by Turning Point USA, a nonprofit with the mission to “identify, educate, train, and organize students to promote the principles of fiscal responsibility, free markets, and limited government,” according to its website. Lamb said he thinks the intellectual diversity debate on college campuses is nothing new but that the lack of intellectual diversity and the divisiveness of the recent election is pervading political debates in the classroom — similar to the type of criticism Trump’s policies have received.

“The unfortunate thing is that it kind of moves past debating about an issue, like Trump’s immigration plans or economic plans, which are all fair game for debating,” Lamb said. “It moves to attacking a person without looking at policy.”

He said classrooms should be spaces where students can discuss opposing viewpoints without feeling they are going to be attacked. He also said the lack of intellectual diversity and the us vs. them political mentality that has manifested in higher education could be contributing to the divisiveness in the country.

However, Linvill has studied how faculty bias in the classroom affects students. He found these biases do not actually harm students’ learning outcomes.

He said people aged 18–22 tend to become more liberal during this period of their lives, regardless of whether they go to college or not.

Linvill said not bringing bias into the classroom is almost impossible for professors but that as long as they provide a space for the sharing of ideas in a welcoming way, learning about opposite viewpoints should not be a difficult task. Lack of intellectual diversity comes mainly from bad teaching, he said, not a professor’s bias.

What Linvill and Lamb said they agreed on is that regardless of a controversial political issue, the better option is to never shut down opposing viewpoints, but to listen, to challenge and to learn.

“It’s the place of higher education to challenge people to make them consider why they believe the things they believe and what it is that they actually believe,” Linvill said. “And that can be difficult.”