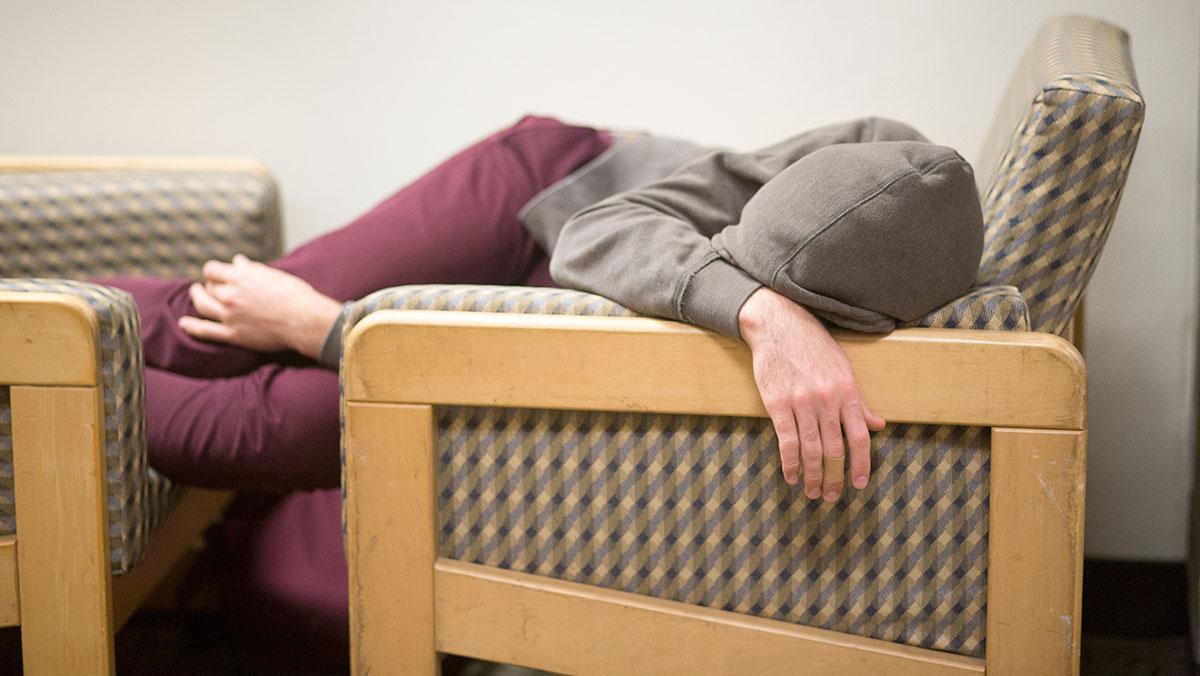 Jennifer Williams/The Ithacan
Junior Nick Filippini sleeps in a chair at 2:30 a.m. Oct. 15 in the library during the week many students had midterms.
By Maura Aleardi — Staff Writer
Published: October 22, 2014

For at least 30 years now, individuals throughout the world have been lacking sleep at the right time and for the proper duration, Kyla Wahlstrom, director for the Center for Applied Research and Education Improvement at the University of Minnesota, said.

Studies indicate the need for a culture shift toward an attitude supporting the need for sleep, not just for working adults, but for college students especially.

Much of the influence on students to not sleep comes from others, Erik Herzog, professor in Washington University’s Department of Biology, said. People often perceive sleep negatively, he said.

“In general, folks take pride in how little they sleep,” he said. “If you sleep, you must be lazy. This is wrong.”

In the 17 years that Wahlstrom has been researching this topic, she said she has noticed one new influence on students’ sleeping habits: technology. She said cellphones and computers are greatly impacting the quality of sleep people are getting. The blue light in laptops makes the brain think it’s daytime, which makes it more difficult for the brain to enter sleep mode after viewing a computer screen, she said. Also, cellphones in the bedroom distract the sleeper during the night, she said.

“It disrupts the REM sleep — the sleep pattern of the person — and it can be so disruptive night after night that even though they are in bed for the eight or nine hours, they’re not getting proper sleep,” she said.

A problem that Katharine Kittredge, professor in the Department of English, said she often observes is that freshmen neglect to schedule classes to allow enough time for sleep.

“When you get to college, you have the ability to make a cycle that matches better with what your body biologically does,” she said. “The problem is a lot of freshmen don’t yet do that.”

Freshman music performance major Tristen Jarvis is dealing with having an 8 a.m. class every day. In addition to his early mornings, he is also up until at least 10 p.m. practicing each night. His late nights are not only due to excess homework but also the fact that he often forgets about assignments until the last minute, which is something he said he could avoid.

While it is recommended, as Kittredge said, for students to tailor their daily schedules to their sleep schedules, some students find it impossible to do so. Sophomore David Gaunt said he is obligated to take certain classes, including an 8 a.m.

Junior Katelyn Gualtieri said the students’ ability to customize their schedules depends largely on their major.

“I think sometimes it’s unavoidable, like you have no choice and you have to take that class,” Gualtieri said. “I’ve been able to avoid it for most of my semesters. But, I think you can avoid it but for some majors you can’t.”

In addition to homework, extracurricular activities also play a role in students’ sleep schedules. Sophomore Maddy Feiner said her nightly classes and meetings cause her to go to sleep later.

“I do this because I am so busy during the day that at night is the only time I have to do projects or study,” she said.

School-related activities are not the only reason students don’t get enough sleep. Sophomore Christan Cassidy-Arnstutz said he stays up doing enjoyable activities such as hanging out with friends and being on his computer.

“I’d like more time,” Cassidy-Arnstutz said. “I like doing all the things I do. If I had an extra three hours of sleep that would be great, but as it stands, I like being awake to do things.”

Hocker said parents are a factor in sleep deprivation among students. She said their negative ideas of sleep can influence students to sleep less.

“There’s also a mentality that it’s OK to just not sleep,” she said. “A lot of our parents come from a generation where everyone was supposed to just be very industrious and hard working, and so I think there’s sort of a deep-seeded sacrifice of health in order to just get things done.”

Parents, Wahlstrom said, need to be educated about how the brain develops, and it needs sleep to do so. Then they will be less inclined to censure their children for sleeping, she said.

“It’s not only informing students. I think that parents need to know about their teenagers and college-age students and how the brain is still in development during that time,” Wahlstrom said. “Parents need to know this so that they don’t drag their kids out of bed and call them lazy bums because they sleep on the weekend.”

In order to change sleeping habits, students must make changes to their daily schedules and be aware of the lighting they are exposed to, Herzog said.

“Throw away your alarm clock,” he said. “Wake when you have finished sleeping. Reward yourself by going to bed when you’re tired. Schedule your classes according to when you can learn. Keep a regular schedule. Try to avoid bright lights after sunset and seek bright, outdoor lighting in the morning.”

One of the biggest contributions toward sleep deprivation among students is waking up for school, Wahlstrom said. She said during puberty the brain is on a specific time frame, which requires 9 1/4 hours of sleep, specifically from 10:45 p.m. or 11 p.m. until 8 a.m.

“In the mid 1990s, the brain researchers and the sleep researchers across the country in sleep labs were discovering that the teenage brain is on a different sleep-wake cycle than are the brains of either preteen, children or adults,” Wahlstrom said. “During puberty, the human brain goes into a very fixed time frame for going to sleep and waking up.”

Because of this restricted sleep schedule, Wahlstrom said, it is understandable that students often sleep during their first hours of class if the school day starts around 7 a.m.

Over 300 secondary schools pushed back the start time from 7:15 a.m. to 8:40 a.m. as a result of Wahlstrom’s study on later starting times for schools. The results, she said, showed that students benefitted from the later start time. Specifically, students had better GPAs and got along better with others.

“They couldn’t get over how much better they felt,” she said. “They felt they were getting better grades. They had less fights with their peers. They got along better with their parents. Everything in their life was better as a result of this.”

Wahlstrom said it’s imperative that students are educated on their own bodies and the necessity of sleep.

“People need to acknowledge and honor the fact that their bodies need to sleep, and without it, they’re kind of a wreck,” she said. “Having an awareness of your own body development and your brain and how it functions with sleep is pretty important for young people.”