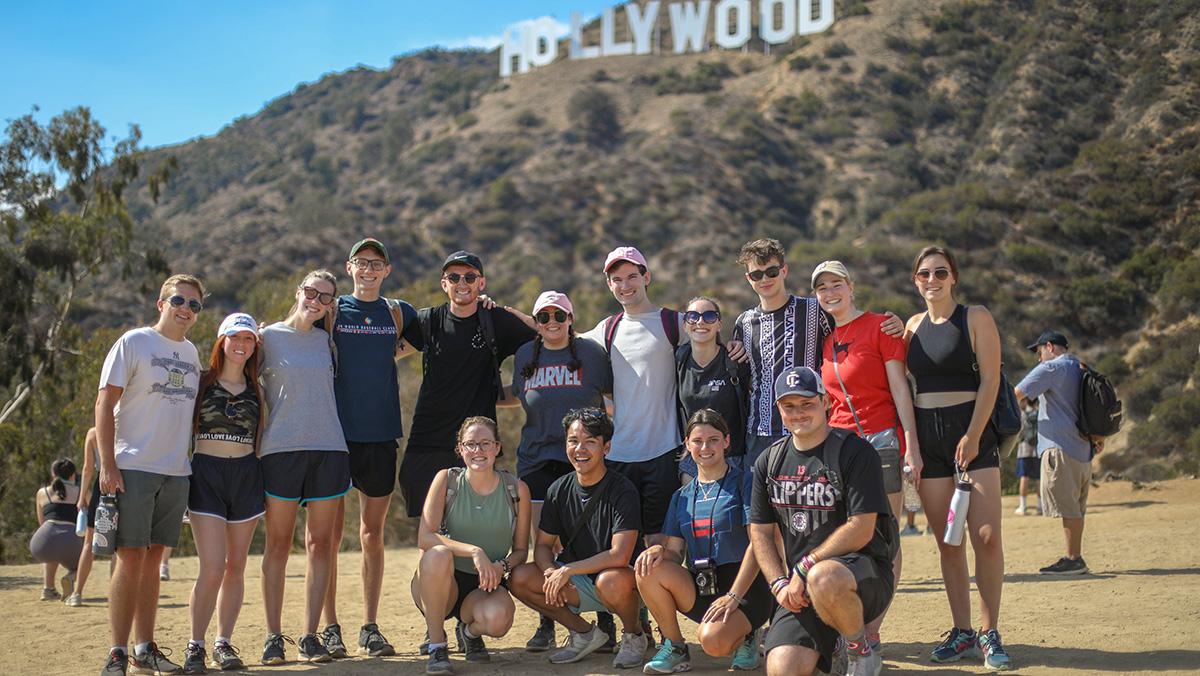 Courtesy of Marina Bryan
A group of Ithaca College students go on a hike to the Hollywood sign while studying away at the Ithaca College Los Angeles Program.
By Jillian Bleier — Assistant News Editor
Published: August 26, 2021

Ithaca College senior Marina Bryan was disappointed when she was sent home early from the Ithaca College London Center (ICLC) in March 2020 because of the rapid spread of the coronavirus around the world.

“It was just really upsetting to get the email saying that we were being sent home because it was my first study abroad semester,” Bryan said.

Bryan is currently studying at the Ithaca College Los Angeles (ICLA) Program at the James B. Pendleton Center in Los Angeles for the fall semester. She said she was nervous to apply because the program has not been open since Spring 2020.

“I was really excited that it did still happen and that I’m out here,” she said. “I’m really hoping that I am able to remain out here for the rest of the semester and it doesn’t get shut down again.”

Study abroad programs are back up and running for the first time after they were shut down in March 2020. Students once again have the opportunity to go abroad or travel to the college’s satellite campuses at the ICLC in England or at the James B. Pendleton Center in Los Angeles.

Study abroad programs were on hold for the entire 2020–21 academic year, said Rachel Gould, director of Study Abroad in the Office of International Programs and Extended Studies. During this time, affiliated study abroad programs and exchange programs — which are not managed by the college — were not available for students to attend.

Gould said she thinks approximately two-thirds of affiliated programs are currently running at some capacity, but the remaining third are still suspended due to the COVID-19 pandemic.

Junior Irena Rosenberg arrived in Seoul, South Korea, Aug. 14 as an exchange student and is in the middle of her required two-week quarantine. She said she originally wanted to study in Singapore, but the program is not offered this semester.

Rosenberg said social distancing and reduced class sizes are in effect and people are wearing masks. This is not surprising because mask–wearing is a social norm in East Asian countries, for health and safety — even just for the common cold, Rosenberg said.

“So far, I do think it is pretty strict of what we’ll be going into once we’re released from quarantine,” she said. “COVID-19 definitely hasn’t let up over here, but it’s still workable and I’m just glad to even be going abroad.”

Senior Laura Koch is also currently at the ICLA center. She studied in Spain this past summer but said her original plan was to go to Spain in summer 2020 so that both programs she wanted to do were not back-to-back.

“It was still worth going [to Spain] even with the setback of COVID-19,” she said. “If anything, looking at it on the positive side, it kind of added to the uniqueness in a way and it will almost be more memorable because it was during a pandemic.”

Koch said she was more nervous about traveling to LA rather than Spain because the Delta variant was starting to spread in Spain closer to the end of her stay, compared to the variant’s current hold on LA County, which reached over 25,000 fatalities as of Aug. 19, according to the Los Angeles Times.

“I’ve been hearing a lot of stories, even people I know who are vaccinated and still got COVID-19 — I’m assuming from Delta — so that makes me a little more nervous,” she said.

There were 78 students who arrived in LA on Aug. 18 and were tested for COVID-19 upon arrival, Stephen Tropiano, professor and director of the JB Pendleton Center in LA, said. Out of the 78 students, 20 are recent graduates of the college who had planned to study at the center in summer 2020, but were delayed by the pandemic and are now doing one-credit internships, he said.

Tropiano said his main concern in reopening the program was that students would be able to stay safe and healthy. He said masks are required indoors, in alignment with the policy at the college’s Ithaca campus.

“I didn’t know how well it would work out, but it definitely was easier to do because a lot of time has gone by and students have been living with the pandemic for a while,” he said.

There are 36 students at the ICLC who will be tested twice a week until September when the need for testing will be reassessed by the British government, Gould said.

She said traveling to different countries at this time is very complex due to quarantine regulations.

“We are limiting travel, both the travel that we organize, as well as independent travel that students do,” said Gould. “They are limited to keeping their travel to within England for right now — just England, not the whole of the U.K.”

Junior Cali Trainor said she is currently at the ICLC and said she is nervous but feels relatively safe because the program has similar COVID-19 protocols in place as the Ithaca campus did last semester, with plans for limited class sizes, social distancing, testing and quarantining.

“I am immunocompromised,” Trainor said. “I actually got my third vaccine dose the day before coming here, it had just been approved, and I just wanted to have every protection possible.”