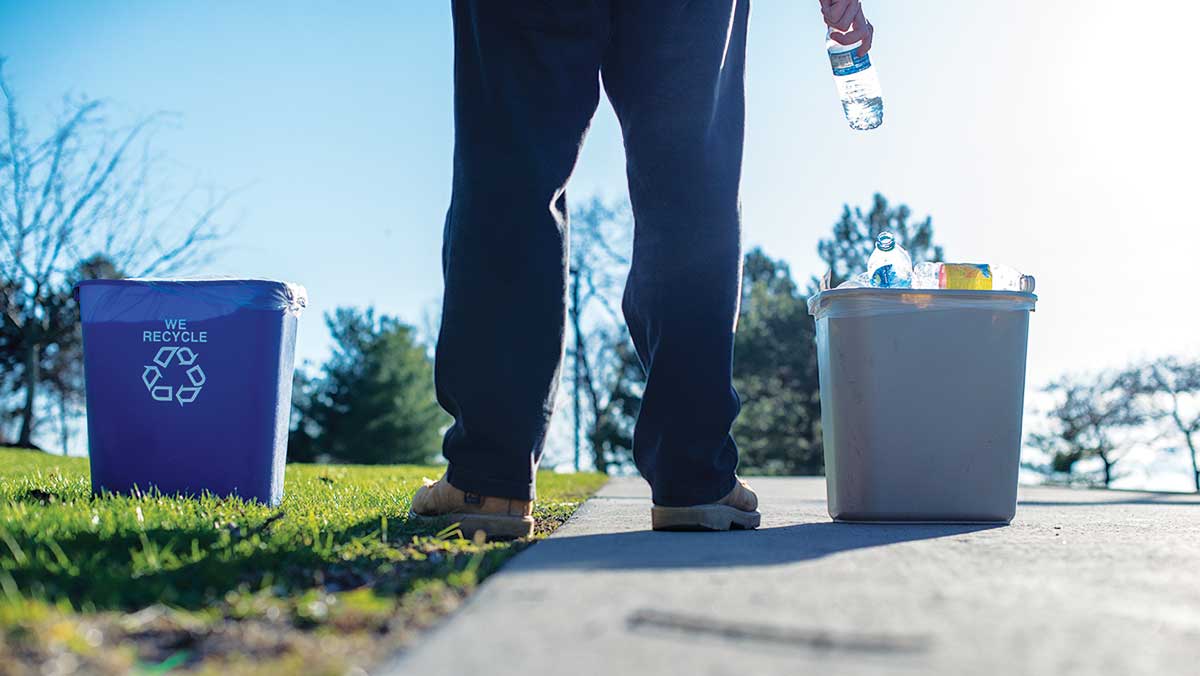 Amid many other concerns Ithaca College is facing — successfully instituting IC 20/20, part-time faculty unionization and the demand for better mental health services — initiatives to keep the college a leader in environmental sustainability no longer seem to be a priority, according to students and faculty involved in sustainability efforts.

The college has missed emission decrease goals laid out in the Climate Action Plan to become carbon neutral by 2050, fallen in sustainability rankings, failed to develop a sustainability major and minor despite receiving a grant partially for that purpose and is experiencing limited student engagement with sustainability issues.

Jason Hamilton, the chair of the environmental studies and sciences department, who was a part of the committee that developed the Climate Action Plan, said sustainability initiatives were at their peak at the end of Peggy Ryan Williams’ presidency in 2008. However, after President Tom Rochon took office, sustainability entered competition with other major efforts like IC 20/20.

“Other institutions are doing more and more and more, and Ithaca College — which was kind of one of the leaders in the country — is now getting passed up in a lot of ways,” Hamilton said. “We’re kind of average, to tell you the truth.”

Rochon did not respond to a request for a comment.

In 2011 and 2013, the college received gold ratings in the Sustainability Tracking, Assessment & Rating System. The information for the STARS rating system is self-reported.

Each year, the Sierra Club issues a “Coolest Schools” list rating colleges on sustainability. In 2013, the college ranked 69 out of 164 schools. In 2014, in a list of 173 schools, the college didn’t make the list at all.

The Climate Action Plan called for a 25 percent decrease in emissions by 2015; however, emissions have increased.The college’s net emissions for 2007 were 32,629 metric tons of carbon dioxide equivalent, a number which jumped to 44,357 tons in 2011, according to emission reports submitted to the American College and University Presidents’ Climate Commitment. Other goals set for 2015 not yet reached include developing the documentation necessary to permit an on-campus wind turbine, assigning responsibility for transportation coordination, establishing vehicle purchase and operation standards and others.

The 2013 Climate Action Plan progress report states that a 7 percent increase in electricity use and an 8 percent increase in natural gas consumption between fiscal years 2012 and 2013 can be attributed to the Athletics and Events Center, opened in Fall 2011.

“Sure, that building is a giant energy hog,” Hamilton said. “Before the A&E Center event got built, there was discussion about how do we offset the CO2 production from that building so that this doesn’t happen. There was no reason why this had to happen; it’s just, we let it.”

Mark Darling, sustainability programs director in the Office of Energy Management and Sustainability, also said he was aware that the A&E Center would have an impact on emissions. However, he said the tendency to be over-critical detracts from the acknowledgment of the college’s progress over the past 10 years.

“Parents of prospective and incoming students — I hear it from them all the time that this is one of the greenest campuses they’ve been to,” Darling said. “We have composting, we have recycling, the place is neat and clean, we have LEED buildings, we seem to be pretty progressive — there’s lots of good stuff here.”

In 2008, the college received a non-renewable $500,000 grant from HSBC Bank to develop sustainability initiatives. Among the original intentions of the grant was the development of a sustainability major and minor. However, these programs do not currently exist.

“We kept putting huge amounts of work into proposals [for the sustainability major and minor], putting them forward through the administrative channels, and then they were just hit with deafening silence,” Hamilton said.

Hamilton, who was on the steering committee dedicated to managing the money, said the money that would have been dedicated to a new major was instead put toward developing the new Department of Environmental Studies and Sciences. Other initiatives the grant money went to included providing scholarships and grants to students who were engaged in sustainability.

Hamilton said environmental studies and sustainability are not the same thing, and developing a stronger department is not a replacement for a sustainability major.

One source of sustainability education at Ithaca College is the Quest for a Sustainable Future theme within the Integrative Core Curriculum. However, of the six ICC themes, Quest has the lowest student enrollment with 188 students between the classes of 2017 and 2018. Quest also has the fewest number of course offerings, with only 11 courses available in Fall 2015.

Michael Smith, associate professor in the Department of History, has been participating in faculty discussions about how to get the college back on track and will teach a class in the Quest theme next semester. Smith said sustainability education at the college needs to go beyond the ICC.

“In terms of really offering a serious and probably troubling critique of how our society needs to become more adaptable and resilient and sustainable … How do we reactivate some of these themes that seemed to be flourishing just five or six years ago?” Smith said.

Students who are involved with advancing sustainability initiatives at the college are struggling to obtain more widespread campus involvement. Sophomore Josh Kelly, chairperson of IC Progressives, helped to organize the weeklong celebration of Earth Day. Kelly said attendance of Earth Week events, which included workshops, discussions, a documentary screening, a bonfire and more, were very low.

An example of low turnout occurred when senior Jaclyn Meshako attempted to use plastic bottles to create a display on the Academic Quad and encouraged passersby to sign a petition seeking the ban of single-use plastic bottles and bags on campus. However, she was unable to make as large a display than she had originally wanted due to the lack of help.

Meshako said encouraging people to recycle is an easy way out of addressing widespread overconsumption of plastic products. Meshako said other institutions are banning single-use plastics, and she thinks the college should be at the forefront of the movement. The University of Vermont banned the sale of bottled water on campus in 2013, and in 2012 students at Loyola University voted to phase out water bottles and received administrative help in their efforts.

As a senator-at-large in the Student Government Association, Kelly proposed and passed two bills in October 2014, one calling for a campus-wide ban on the sale of single-use plastic bottles and another calling for a ban on plastic bags.

“This is something that is so easy, it would save them money to just make these small changes, and it could bring a whole new sense of environmentalism to the campus,” Kelly said.

Bookstore Director Rick Watson said banning plastic bags would be problematic because the alternative, paper bags, are not textbook-friendly. Watson said he agrees socially with Kelly’s efforts, but that the effort needs to go beyond Mac’s and the Campus Store. He said he would be willing to comply if it was an initiative that the college as a whole agreed to.

One student organization that is doing well is the Resource and Environmental Management Program. Lew Durland, director of energy management and sustainability, said the success of the college’s recycling and composting program can be attributed to paid student employees in the REMP program.

Darling, who is retiring at the end of the semester after nearly 30 years, said the college needs to do more to incentivize sustainable behavior and to disincentivize unsustainable behavior, such as encouraging the use of public transportation and carpooling by supporting a parking fee for faculty and staff.

The Residence Hall Association’s annual Energy Challenge, a competition among residence halls to decrease energy use, is an effective way to incentivize students to restructure their habits, Durland said.

“Individual changes in behavior practiced by an entire community can have a wide and deep effect,” Durland said via email.

After completing his first year at the college, Durland said he is leading a team in the development of a strategic plan for the Office of Energy Management and Sustainability.

“While the CAP focuses on carbon neutrality, the strategic plan will focus on how we manage our energy use and cost, and will also have a broad, triple-bottom line view of sustainability,” Durland said via email.

To encourage campus-wide discussion about sustainability, Durland said he plans to host town hall meetings in the next academic year, which will include students.

Despite past accomplishment and positive representation to prospective students, Darling said the college has a long way to go.

“We’re not going in the right direction, and we’re certainly not going fast enough.”