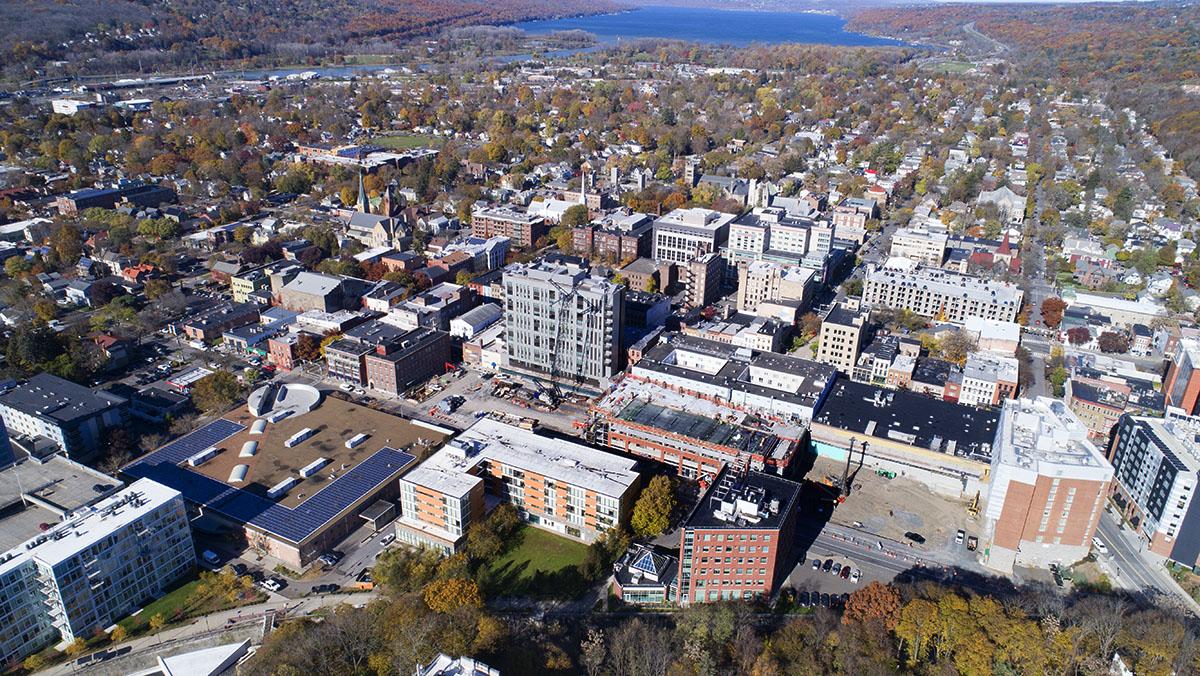 Thomas Kerrigan/The Ithacan
The official name of the decarbonization plan is the Efficiency Retrofitting and Thermal Load Electrification Program and the plan is starting with the electrification of buildings, which means changing energy in homes that use fossil fuels to electric technologies. Nationally, residential and commercial buildings account for 40% of greenhouse gas emissions.
By Caroline Grass — Staff Writer
Published: November 18, 2021

The City of Ithaca found itself on the national stage Nov. 4 as the city announced the approval of a plan to decarbonize all of its buildings by 2030, making it the first city in the United States working to become 100% decarbonized.

Michael Smith, professor in the Department of History and the Department of Environmental Studies and Sciences at Ithaca College, said decarbonization is when energy systems that emit harmful greenhouse gases like carbon dioxide and methane are substituted for renewable sources instead. Greenhouse gas emissions are a leading cause of global warming and world leaders at events like the UN Climate Change Conference (COP26) are pledging to try to limit the warming of the earth to 1.5 degrees celsius above pre-industrial levels. In a report by the Intergovernmental Panel on Climate Change, human-induced global warming is harming the environment in many ways. The report says there is high confidence and substantial evidence to support the fact that human-induced global warming is causing increased land and ocean temperatures, increased frequency of heat waves on land and increased frequency and intensity of precipitation events.

The official name of the decarbonization plan is the Efficiency Retrofitting and Thermal Load Electrification Program and the plan is starting with the electrification of buildings, which means changing energy in homes that use fossil fuels to electric technologies. Nationally, residential and commercial buildings account for 40% of greenhouse gas emissions.

Rebecca Evans, the City of Ithaca’s sustainability specialist, said the decarbonization plan will help bring the city to its Green New Deal goal to become carbon neutral by 2030.

The plan will tackle retrofitting 6,000 residential and commercial buildings with electric systems for heating, cooling and electric appliances. The city has secured $100 million in private investments for phase one of the plan, which is targeting 1,000 residential and 600 non-residential buildings. Evans said the buildings that are going to be in phase one have not been chosen yet. She said there are two components to the process: looking at the oldest buildings and taking into account cultural and equity issues.

“We need to look at who are the energy hogs, like where are the oldest and leakiest and crummiest buildings,” Evans said. “The other piece is kind of a cultural and equity piece, like who are the disadvantaged communities … because part of the Green New Deal is to start trying to repair or otherwise address historical inequities in the City of Ithaca.”

Smith said he thinks the decarbonization plan is admirable, but he has a few reservations about the specifics. One of the questions he has is what will happen if residents have newer appliances that are not electric, but still have life in them. He said making a household absorb the cost of appliances that still work and have life might be a problem for many residents.

“I’m committed to this stuff,” Smith said. “I’ve been involved in environmental justice since I was in college, but I fit that category. We have this brand new furnace, and I would love to get it out of there, but I don’t think it would be fair to us to absorb the cost of that new furnace and put in a new one.”

Freshman Noa Ran-Ressler said she first heard about the plan when she was looking for local stories for her newscast for WICB and followed the story as it was proposed and subsequently approved. She said that she thinks the decarbonization plan is a great idea and that starting at the city level is what’s needed to make meaningful changes to address climate change.

“We want to make a global impact with our climate change,” Ran-Ressler said. “But the issue is we’re not looking at what cities are doing. To use renewable energy to actually make a difference on a smaller scale … can then be taken on a much larger scale very easily.”

Smith said even though the college might not be under the same complete building electrification goal as the city, he is worried about the sustainability efforts of the college in general.

“I’ve been very distressed by how the commitment to this sort of thing has really diminished for a while,” Smith said. “[It] was looking better two years ago, and now with the austerity measures … I don’t see any way that the college is going to be remotely close to a carbon neutral state by 2030.”

Dave Maley, director of Public Relations, said there has been no change in the college’s belief of achieving carbon neutrality by 2030.

The college was going to house a Center for Climate Justice (CCJ), but it will no longer be launched following the Academic Program Prioritization (APP) process and the ongoing elimination of 116 full-time equivalent faculty positions. Sandra Steingraber, former distinguished scholar–in–residence in the Department of Environmental Studies and Sciences, was one of the main developers of the CCJ and left the college during Spring 2021. As of March 2021, she said she was trying to find somewhere else to start the CCJ.

Since leaving the college, Steingraber has become a senior scientist at The Science and Environmental Health Network (SEHN). The SEHN is a consortium of North American organizations focused on the misuse of science in ways that have failed to protect human and environmental health. Steingraber said the Town of Ithaca’s plan for decarbonization is exciting, and she is proud of it happening. She said public pressure from the help of the Sunrise Movement chapter in Ithaca helped to launch the Ithaca Green New Deal in the City of Ithaca and the decarbonization plan.

“This was a real example of the way in which really innovative ideas that come out of college classrooms can light a fire in the hearts of young people who then go out into the community after graduation and enact and operationalize some of the ideas they learned about in the classroom,” she said.

Smith said his hope is that the college will hire a president who makes sustainability and energy management a priority so the college can get back on track.

“We’re just sort of in this holding pattern,” Smith said. “We have an interim president, four interim deans, and we have an interim provost. Nobody’s gonna make any kind of big decisions until that’ll shake it out. So I think we have to wait probably a year, but my hope is that people who really care about this will make it clear … that we really want a president who has [sustainability] as one of their top priorities.”

The college’s presidential prospectus profile states that the college has a vision and actionable commitment to sustainability through over 150 sustainability-focused courses and the management of the natural lands on campus, and that the presidential search will look for an individual who connects with the values of the school, students, staff and faculty.

Junior Kelly Warren, a project manager for the Eco Reps, said the college has focused on its natural gas and energy consumption. The Peggy Ryan Williams Center uses over 50% renewable sources of energy, according to the Ithaca College campus map website. The website also says geothermal energy is used for heating and cooling, and the building received a LEED platinum certification in 2010 from the U.S. Green Building Council.

“It is important for the school to incorporate more of this system [geothermal] on campus,” Warren said via email. “It is limited, and although the initial cost is expensive, it is so important for our plan.”

Warren said the Eco Reps organization wants to hold the school accountable to reach the carbon neutrality goal by 2030.

“It is our job to keep pushing for these reforms,” Warren said via email. “The school tries to be more ‘eco-friendly,’ but sometimes we need to educate the general college community in ways that promote reform on an individual level.”

The city set an ambitious goal to have the electrification of all buildings complete by 2030, Evans said. She said the plan is scary and a massive undertaking because a plan like this has never been done before and there are no examples to look at, but she said she is proud of the steps Ithaca is taking toward becoming carbon neutral.

“This is something that I think the people living, working and going to school in Ithaca can be really, really proud of,” Evans said. “This gives me a lot of hope that there’s action being taken at this scale, in you know, in teeny tiny little cities like Ithaca. Imagine if you could scale this to an entire state or entire region, or the world.”