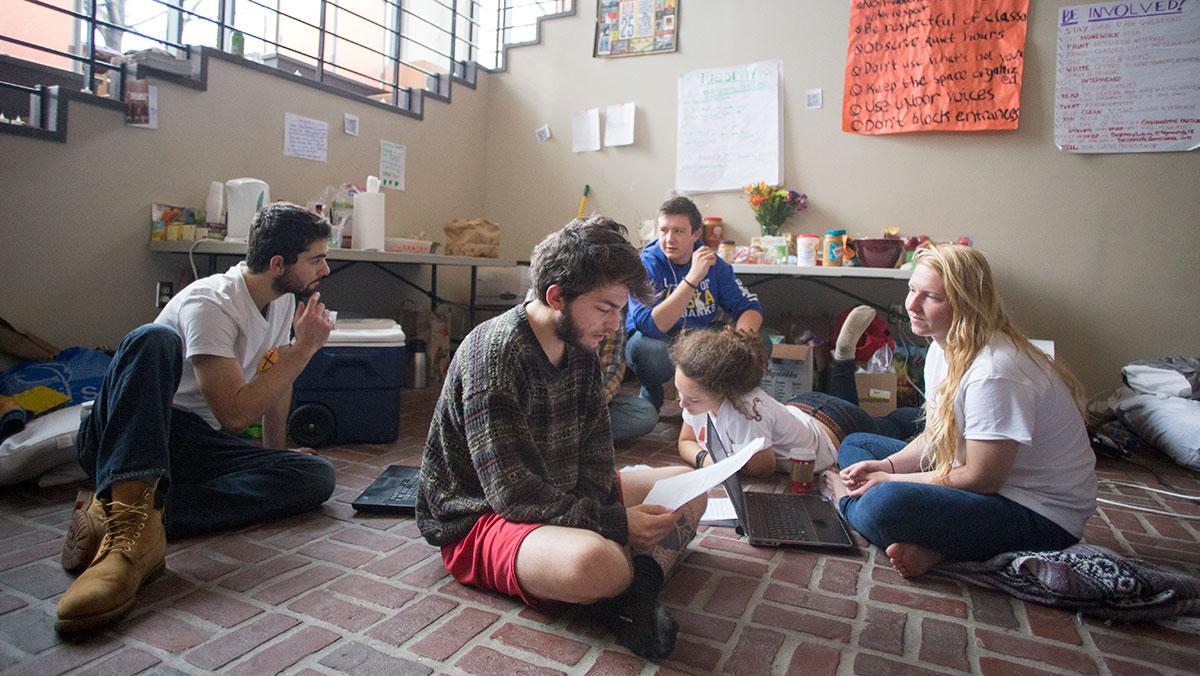 Over 300 students from more than 50 student organizations at Syracuse University have joined together to protest a wide range of administrative actions, which protesters say have hurt minority students, victims of sexual assault, disabled students and students who seek mental health care.

Students at Syracuse have been conducting a sit-in in an administrative building since Nov. 3 in order to demand greater transparency from the administration as well as a greater commitment to diversity. Forty students have been sleeping in the lobby of Crouse-Hinds Hall, and protestor Tatiana Cadet, a junior at the university, said over 300 students are part of THE General Body, the student coalition that is organizing the protests.

“We know what we stand for,” Cadet said. “We know that diversity and transparency are important at our institution.”

According to the group’s website, the group is protesting the closing of the Advocacy Center, a resource for victims of sexual assault; the decision not to divest from fossil fuels; the defunding of the POSSE program, a scholarship program for minority students; the lack of student representation in administrative decisions such as the Fast Forward initiative, the long-term planning for the university; and the lack of access to mental health treatment for students on campus, among other grievances that are included in a 45-page document.

THE General Body is a coalition of over 50 different student clubs and organizations, protester Ella Mendonsa, a senior, said. She said the five main student organizations behind the protest are Students of Sustainability at Syracuse University, the Syracuse University chapter of the National Association for the Advancement of Colored People, Pride Union, Disability Student Union and Divest SU.

In a press release from Nov. 10, Kevin Quinn, senior vice president for public affairs at Syracuse, said the university is negotiating with the students and will work with them to make changes on campus.

“The students provided some helpful feedback on our proposals,” Quinn said in his statement. “We hope very soon we can move to a new phase in this process, one that is sustainable and can produce positive change over the long term.”

“We’re all of these high-achieving students who are leaders of student organizations,” she said. “They’ve forced us to negotiate for some things, like mental health services, that aren’t a want, they’re a need.”

Cadet said she believes the temperature in Crouse-Hinds Hall has been dropping as the protests continue, and she is concerned about the role of the campus public safety.

Mendonsa said protesters came together, because many different student groups were having issues communicating with the administration on individual issues.

“We all tried to reach out to the administration on small but important issues,” Mendonsa said. “The Student Association and [University Senate] are irrelevant at this point because all of the decisions are being made by the administration. They’re not really talking about why they made these decisions, nor are they responding to the real needs of students.”

According to a press release issued by the university on Nov. 10, Bea Gonzalez, dean of University College at Syracuse, has been meeting with the protesters to try to come to an agreement and establish a list of concrete steps the university is taking to accommodate the protester’s requests. The press release said the university will meet with representatives of DIVEST SU; start the search for an Americans with Disabilities Act Coordinator; add student representation to the Fast Forward initiative, the long-term planning process for the University; hire an additional psychiatrist and reassess the funding and staffing needs of the counseling center; and allow the Student Association president the ability to email the entire student body, among other changes.

Cadet said the students are prepared to stay in the building until demands are met.

“We plan on being here as long as it takes for administration to meet our demands,” Cadet said. “We’re hoping it will be very soon. We’ve definitely took steps to progress forward.”

Mendonsa said the Syracuse protesters can serve as an example for other students who feel they are not being heard on their campuses.

“This is a great example for students who don’t think their voice is being heard on their campus,” Mendonsa said. “Hopefully they don’t have to occupy an administrative building, but hopefully they can come together to find a new way of communicating with their university.”

Cadet said many of the issues THE General Body are addressing happen on many campuses around the country.

“These are not issues that are only happening at our university, these are issues that occur all across the United States,” Cadet said. “In recognizing these issues that we face, other institutions can recognize injustices on their campuses and maybe effect change there as well.”