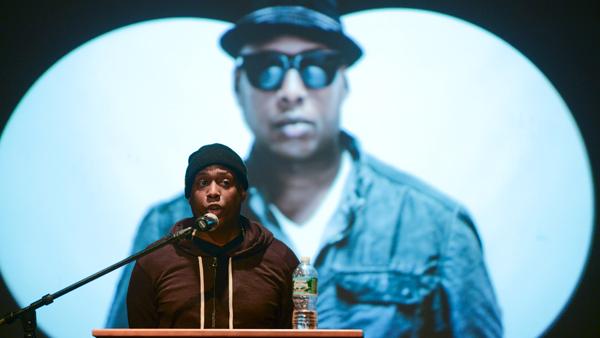 There was something special about the energy in Emerson Suites last Thursday as Talib Kweli took up the mic not to rap, as some students had expected, but to discuss the hip-hop industry and the role of the artist in society.

Some students arrived nearly an hour early, worried they wouldn’t be able to get a seat, only to walk into an empty Emerson Suites where they camped out with laptops, spreading scarves and jackets across seats to save places for friends. I was one of them, perched amongst a group of girls who, for the most part, knew only that Kweli was a famous rapper — easily conflated with his popular contemporary, Lupe Fiasco. As we waited, Wikipedia filled in the blanks.

Evidently Talib means “student” in Arabic; Kweli Swahili for “true.” He grew up the son of professors in Park Slope, Brooklyn. In the early 2000s he gained notoriety as half of “Black Star,” along with MC Mos Def. Eventually boredom gave way to the usual conversations that arise when someone famous is on their way.

“What if we make friends with Talib and hang out with him all weekend?” One girl joked.

A few others sent text messages encouraging friends to come, some with more success than others. As it would turn out, cell phone autocorrect doesn’t recognize the name Talib. It wants to change it to Taliban.

But by the time Kweli arrived, a few minutes late from an interview in the WICB studios, the seats in Emerson had all but filled. Members of Brothers 4 Brothers, which was sponsoring Kweli’s visit, occupied the first two rows. Senior Ellis Williams, president of the organization, arrived with Kweli and walked down the front row doling out handshakes.

“What’s up? What’s shaking? What’s up? Brothers in the house.”

The event was the end-result of a two-year effort of B4B to bring a speaker to campus, aided by John Rawlins, adviser of B4B and assistant director of the Office of Student Engagement and Multicultural Affairs. Williams and co-president Nathaniel Hemingway introduced Kweli — one wore a red tie and the other a matching bowtie for the occasion.

As Kweli leaped on stage, everyone cheered.

“There was somebody who goes to this school who was on Twitter earlier who said, ‘It’s a damn shame that I’m going to see Kweli speak and two thirds of the school don’t know who he is,’ he paused for effect. “… And y’all are showing me that’s bullshit.”

It wasn’t, but the event did immediately stand in stark contrast to many similar events sponsored by OSEMA or Center for the Study of Culture, Race and Ethnicity — hell, most events held on Ithaca College’s campus — in that “ALANA” students and “white” students were about equal in number. Still, the real shocker was the creation of an honest dialog between the two. Something was different. Kweli didn’t shy away from the truth; he wasn’t trying to impress anyone. When the time came to ask questions, students and members of the community actually said what was on their mind.

The Bronx on fire. The future of rap. Advice for the artist in a corporate world. The feasibility of being a white rapper. Being the only black student in class. The religious qualities of a black barber shop. The demonization of Muslims in the United States.

Senior Gipsy Fernandez approached the mic frustrated with her generation and eager to move forward.

“I don’t know if we need another black power movement, or Chicano movement, a women’s liberation movement … do you think we’re missing that in our generation? And who do we look to for inspiration?”

Kweli was hopeful. “The Malcolm Xs, the Stokely Carmichaels … They’re there in this audience, but it becomes us people older than them to stoke their genius and their creative vibe.”

Vibe was the word of the night. Well, Kweli thinks the word vibe has become a “corny cliché,” and he tries to stay away from it as an artist. But vibration … the active form of the word, that low bass register women naturally feel in their hips (Oww!), that’s the energy Kweli says he’s after when he creates music.

“In a general sense, my job is to vibrate higher,” he said. “My job as an artist, as a musician, is to vibrate on a higher level of consciousness.”

Doing this goes beyond creating authentic, honest music. Social activism is often intertwined with Kweli’s work. Advocating for Mumia-abu-jamal, a man who has been in jail  since 1981 after a contested trial convicted him of murdering a Philadelphia police officer — this is Kweli’s latest project. But at the end of the day, Kweli says he just wants to be liked, just like any artist. In the end it’s about the vibrations — that’s what really gives power to what Kweli calls his role as a connector. Looking around Emerson Suites, it was easy to realize what Kweli meant.

Music. That unifying force that calls people from different walks of life into the same room. It’s a power Kweli said he didn’t realize he possessed until the TSA and FBI stopped him on a flight to Fort Lauderdale for having been listening to Stokely Carmichael’s “The Black Power Mixtape” while booking a reservation over the phone. And this in 2005, an era dominated by gangster street rap.

“50 Cent’s backstory was real enough to convince mainstream America that he might actually show up at your house, ring your doorbell and shoot you in the face … And, you know, people loved it! But while my fellow rappers were being stopped outside of nightclubs for their lyrics, here I was being stopped by the FBI at the airport for listening to a speech that was 40 years old. Stokely Carmichael’s 40-year-old black power speech was more threatening to the establishment than the current crop of gangster rappers.”

Something about Kweli’s directness, his willingness to laugh, freed the debate from the weight that burdens discussions about controversial topics such as race and ethnicity — particularly on a campus paralyzed by political correctness, too scared to move.

The last of a dozen or so students to ask a question was a white student wearing a flat-brim hat. He began by saying he likes to freestyle.

His question was met with groans and laughter. Kweli, in good nature, but with a touch of sarcasm replied, “You know, I think … with white people in hip hop it’s the type of thing where nobody is going to take you seriously until you’re just as good or better. You have to be better. It’s like the reverse of the actual world.”

While sophomore Ken Robertson said he thought the question could have been worded more delicately, the awkwardness was productive.

“Even though I viewed that as a sort of uncomfortable moment, it was a good discomfort in that I think that was something that should be addressed and should be talked about between students of all ethnicities,” he said.

It represents one of many moments in the night that breathed life into the room, moving the discussion — if not forward — at least somewhere.

Senior Tim Hone was glad to experience something besides blind consensus at a college event.

“A lot of those on-campus lecture things in Emerson Suites are a bunch of people in a room all agreeing with each other,” he said.

Williams said he hopes to continue to provide programming that empowers the community.

“That’s one of the most beneficial things we can do,” Williams said. “I really hope students in the future continue on the tradition of trying to incorporate ways that students can interact with other students in a beautiful environment.”