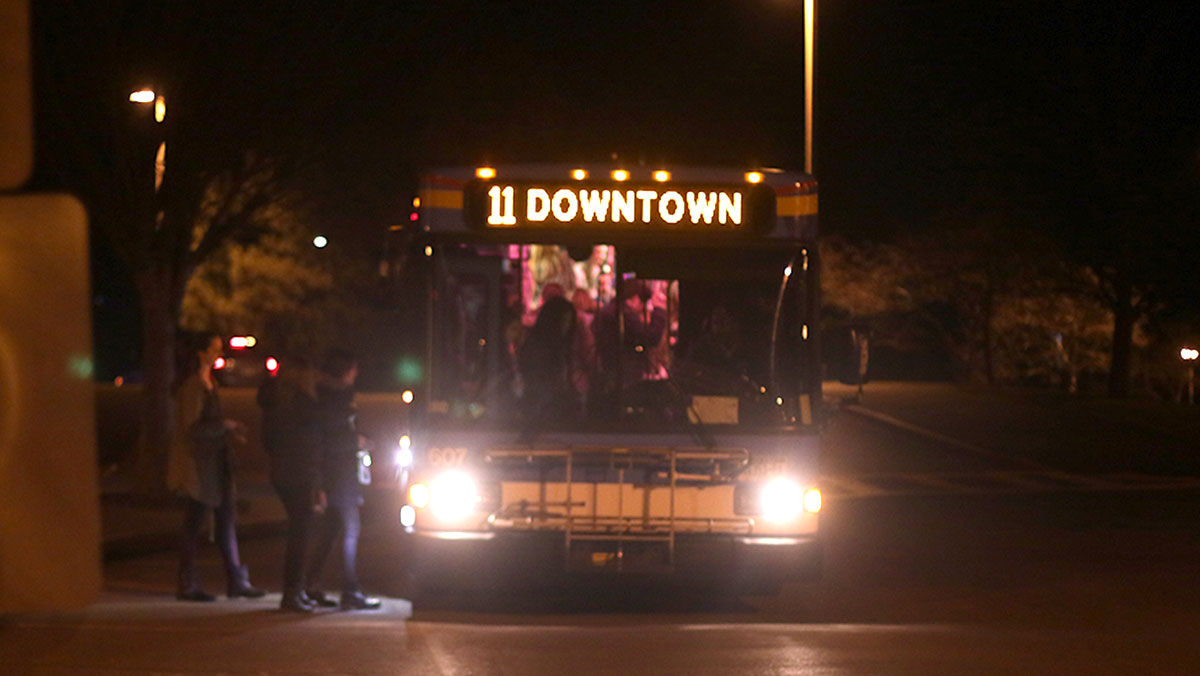 Yana Mazurkevich/The Ithacan
Proposed cuts to summer runs include Route 11, which services Ithaca College. According to TCAT, the last six weekday runs would be cut, meaning that the last bus would leave the Roy H. Park School of Communications stop at 8:40 p.m.
By Michael Pyskaty — Staff Writer
Published: March 30, 2016

The Tompkins Consolidated Area Transit Board of Directors is considering a plan to reduce service on certain bus routes over the summer, according to a press statement issued March 28.

According to the statement, these cuts are being considered in response to continuing driver shortages. TCAT needs at least 82 drivers to maintain the current schedule but only employs 70 on its staff. Alice Eccleston, TCAT assistant general manager,  said in a statement that the cuts are necessary to retain quality service.

“We have to face a new reality that we cannot promise or advertise a service we cannot fulfill,” Eccleston said. “As painful as service reductions are to our community, being unreliable to our passengers and driver burnout are even worse.”

The proposed cuts would impact Route 11, which serves Ithaca College. According to a supplemental document provided by TCAT, the last six weekday runs would be cut, meaning that the last bus would leave the Roy H. Park School of Communications stop at 8:40 p.m. On Saturdays, the 7:05 a.m. and 7:26 a.m. trips would be cut, and on Sundays, the 8:56 a.m. and 9:56 a.m. runs would be cut.

Tim Carey, associate vice president for facilities, was unable to immediately provide information about how TCAT route changes would impact facilities employees over the summer, saying he would need to consult multiple managers and supervisors to compile information about employees and their modes of transportation.

While these cuts are currently only being considered for the summer, Eccleston warned that these route reductions could last longer.

“We cannot promise we will not be forced to make cuts for fall service as well, and we will strive to inform the community so that they can plan for their travel needs,” Eccleston said.

Patty Poist, TCAT communications and marketing manager, said if the cutbacks need to be continued into the fall, they will re–evaluate the routes they cut.

“We want to make sure our college students are well–served at all three outstanding institutions of higher learning,” Poist said. “Not just Cornell, but Ithaca College and TC3 as well.”

TCAT will be holding a public information session about the proposed plan from noon to 2 p.m. and 5:30–7:30 p.m. April 5 at the Tompkins County Public Library. A third session will be held from 5:30 to 7:30 p.m April 7 at Cornell University in 226 Weill Hall, and a fourth session will be from 11 a.m. to 1 p.m. April 8 in the Maplewood Apartments community room, 201 Maple Ave.