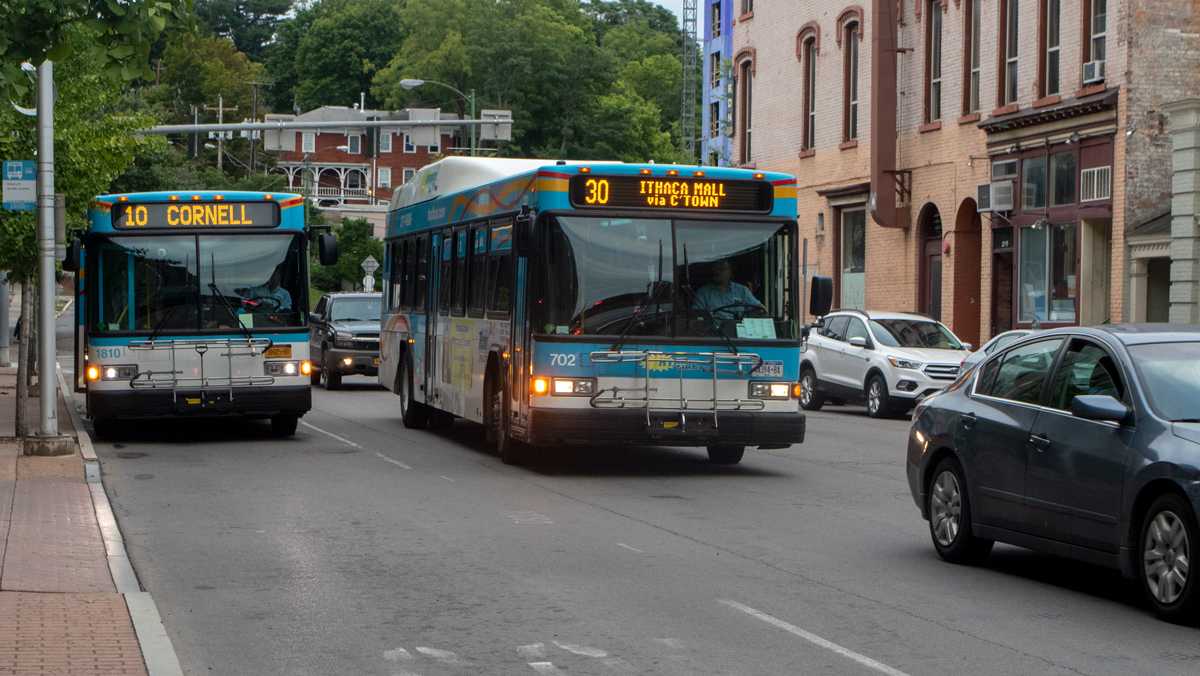 Julia Cherruault/The Ithacan
TCAT received a grant from the Federal Transit Administration through the Low or No Emission Vehicle Program — established in 2016 — to invest in electric buses. TCAT is the only bus system in New York to be awarded the grant, receiving a total of $2.29 million.
By Alexis Manore — Contributing Writer
Published: September 18, 2018

Thanks to a newly received grant, Tompkins Consolidated Area Transit announced Aug. 24 that it will have energy efficient buses operating on and off the Ithaca College campus in two years.

TCAT received a grant from the Federal Transit Administration through the Low or No Emission Vehicle Program — established in 2016 — to invest in electric buses. TCAT is the only bus system in New York to be awarded the grant, receiving a total of $2.29 million. The grant will pay for three electric buses, each costing $878,000, and three charging stations, costing $105,000 per station. TCAT currently has a fleet of 52 buses, eight of which are diesel-electric hybrids. The new buses are manufactured by Proterra, a California-based company that specializes in producing electric buses. The buses are zero-emission and run solely on electricity.

Scot Vanderpool, general manager of TCAT, said the workers of TCAT are in the process of learning how to use the new buses.

“This is also a learning process for TCAT, especially for our maintenance team,” he said. “Electric buses are something completely different to maintain and service, especially the charging aspect.”

In 2006, Tompkins County began emphasizing sustainability. In December 2007, the Waste Reduction and Resource Management resolution was passed, which required department buildings in Tompkins County to minimize solid waste creation and disposal through environmentally beneficial methods like recycling and composting. LED lighting was added to the reception area of the Mental Health Building and to the exteriors of Health Department and the Recycling and Solid Waste Center in 2016. Additionally, the Tompkins County Department of Recycling and Materials Management and the Facilities Department collaborated to install new recycling bins in public areas in 2017.

Christopher Sinton, associate professor and chair of the Department of Environmental Studies and Science, said he is skeptical because as long as the electric buses are taking electricity from unsustainable power plants the initiative is not enough to achieve complete sustainable energy.

The Caygua power plant, offspring of Cayuga Operating Company, is located on the eastern shore of Cayuga Lake and currently runs only on coal.

“As long as New York state still has fossil–fueled generators, like that coal and natural gas power plant, then it’s not doing as much to reach energy sustainability,” Sinton said.

However, Sinton said the electric buses will not produce pollutants within Ithaca, unlike diesel engines, which produce pollution that affects human health.

When diesel fuel combusts, particulate matter is created, and it releases harmful pollutants like nitrogen oxide, carbon monoxide and even heavy metals like arsenic into the air.

“By having electric buses, they are removing that pollution from the diesel engine,” Sinton said.

Freshman Evan Land said he likes the idea of electric buses and hopes the new TCAT buses will not be as loud and disruptive to him because he lives in East Tower, near a TCAT stop on campus.

“That sounds like a wonderful idea for us and the environment,” Land said. “I live in East Tower, and the bus wakes me up when it returns. So it’s nice that it’ll be quieter.”

Senior Morgan Brunson said she is glad TCAT is shifting toward sustainable practices.

“I think it will be good for the environment, you know, less gas emissions,” Brunson said.

Correction: The Cayuga Power Plan, not the Lansing Power Plant, runs on only coal, not coal and gas. They have applied for a permit to convert to gas, but it has not been granted.