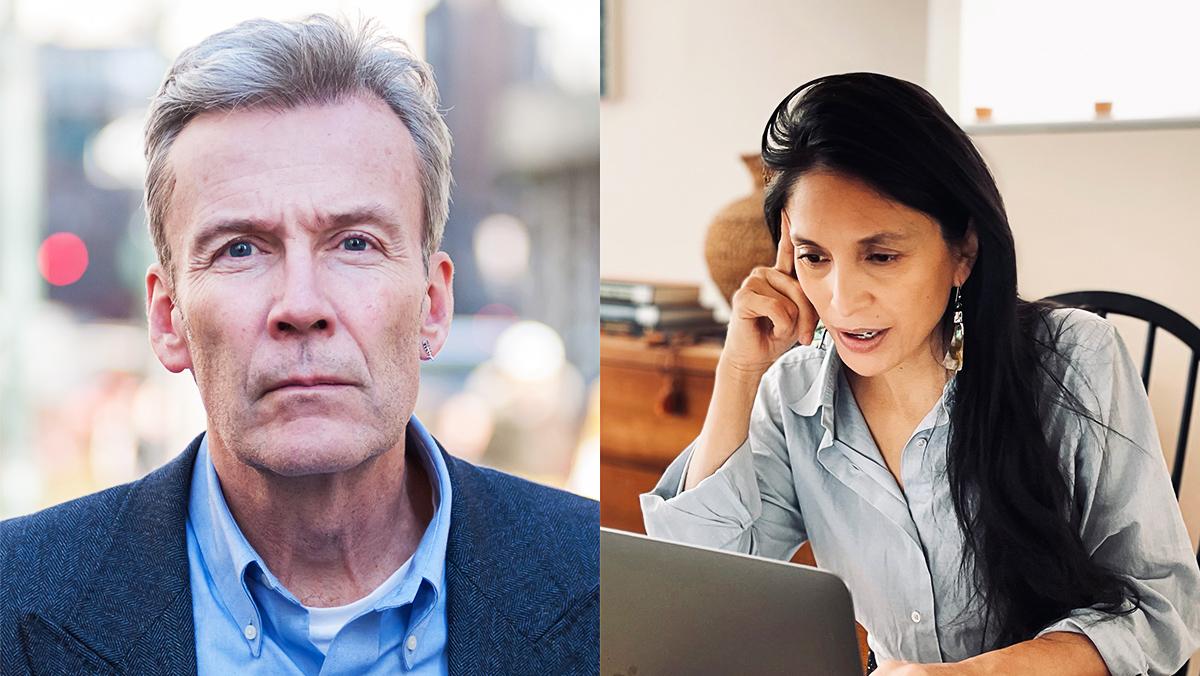 Courtesy of Ben Fractenberg/THE CITY, Courtesy of Jenni Monet
From left, Greg B. Smith, reporter at The City, and Jenni Monet, author of the weekly newsletter, Indigenously, are two of this year's Izzy Award recipients for their work.
By Olivia Stanzl — Assistant News Editor
Published: April 27, 2022

The Park Center for Independent Media (PCIM) held its 14th annual Izzy Award ceremony April 26 via Zoom where independent media outlets and journalists were honored for their work.

The PCIM awarded journalists Greg B. Smith and Jenni Monet, newsrooms Better Government Association and Block Club Chicago, and journalism group The International Consortium of Investigative Journalists. About 140 attendees were present at the ceremony.

Jeff Cohen, founding and former director for the PCIM, introduced Smith, who exposed 5,000 public housing apartments that contained lead paint, even though the buildings were previously cleared of contamination. Smith’s work allowed New York City’s Housing Authority to receive millions of dollars to address the health and safety emergencies the management was causing, including ones caused by lead paint.

“His series was horrifying, not just in the harm that it exposed, the harm to children, to families from lead paint of those living in public housing,” Cohen said. “But the harm caused by the deceptions and cover-ups of the New York City Housing Authority. And also horrifying is that this neglect persisted for years, even generations.”

Before Smith worked for the nonprofit newsroom The City, he was a journalist at The Daily News. Smith said he tried to cover the conditions public housing tenants are dealing with in New York City for years.

In 2012 Smith began investigating the management of public housing and uncovered many cases of neglect. During his investigation, The Daily News was sold to a hedge fund and Smith’s resources that once allowed him to investigate were taken from him. This led him to join The City and continue his work.

“If I had continued to stay in mainstream media … I would never have been able to write that story,” Smith said. “It would never have seen the light of day, no way. … Right now, in New York City, the presence of The City and nonprofit local news organizations is critical because there has been a serious drop in the number of reporters who cover this stuff.”

Jenni Monet, tribal citizen of the Pueblo of Laguna, which is a federally recognized native nation in New Mexico and direct descendant of the Turtle Mountain Chippewa in North Dakota, created her own weekly newsletter Indigenously, which covers Native American communities within the U.S. Monet has been a journalist for about 20 years, but said she has struggled to get support from editors for the stories she pitched.

“I’ve always covered the lands and communities that I know well, the ones that I’ve grown up in, Indian country, it’s been a struggle, and I’m not sugarcoating it when I say as an Indigenous woman, it’s challenging to go into newsrooms, commercial or otherwise, and work on stories that should be getting covered, and only recently have started to be accepted as real news,” Monet said.

According to the American Society of News Editors, Native American journalists make up less than 0.5% of journalists at leading newspapers and online publications.

“It really inspires me to see the change that a small scrappy newsroom like Block Club can make in a major city,” Bauer said. “This isn’t some traditional newsroom, we only opened in 2018, but we’re already helping take care of folks and hold power to account. I think one of the coolest things that came out of this and one of the most inspiring things for me, is to see how nonprofit newsrooms like Block Club and the BGA are teaming up to tell these kinds of stories.”

The Better Government Association’s senior investigative reporter, David Jackson, collaborated with Bauer on her investigation and also exposed how millions of dollars in profits were granted to insurance companies rather than medical providers when Illinois privatized its healthcare program.

Throughout Jackson’s speech he stressed the importance of independent media and following in journalist Izzy Stone’s footsteps. The Izzy award is in honor of Isidor Feinstein “I.F.” Stone who created I.F. Stone Weekly, a newsletter that exposed government deception, McCarthyism and racial bigotry, according to the PCIM webpage.

“He wasn’t beloved because he was independent,” Jackson said. “Izzy Stone was beloved because he adhered to the highest standards of transparency, accuracy and public service. He built that trust, sentence by sentence and article by article and week after week.”

Dean Starkman represented The International Consortium of Investigative Journalists, which he said is a very large collection of people that are based all over the world.

“What’s important to remember about the Pandora papers is [that] this is not our first rodeo,” Starkman said. “So we have been doing this long before I got there, since 2013. This is really a culmination of basically a decade’s worth of work.”

Starkman said The International Consortium of Investigative Journalists was able to expose the Pandora Papers because of collaboration, which is essential for journalists.

“When journalism is in such peril, and our business model is collapsed it’s important for all of us to do things like this [Izzy Awards], to support each other, to work together and essentially to collaborate,” Starkman said. “For the good of journalism, but also for the good of democracy.”