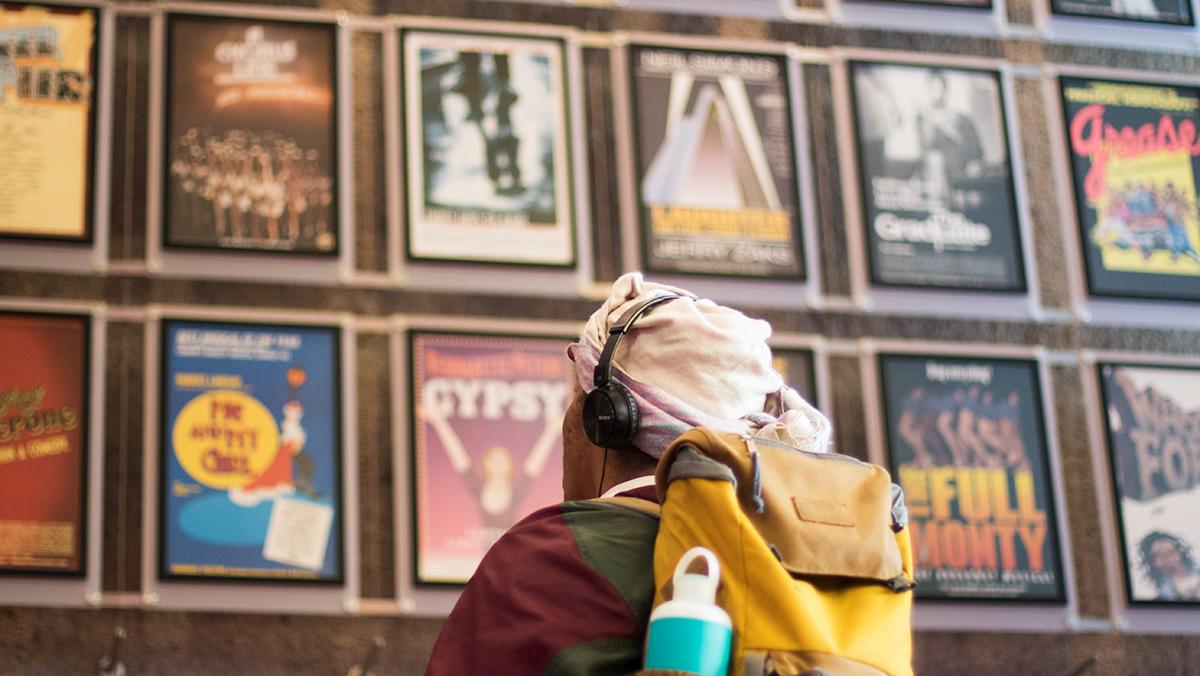 Connor Lange/The Ithacan
“As the semesters went by, it just got less and less open, and people started saying things that weren’t okay, and I began to realize the underlying cause of that was because I was a woman of color,” freshman Erin Lockett said.
By Sophia Adamucci — Assistant News Editor
Published: April 26, 2017

It was his first play at Ithaca College — “Intimate Apparel” — and senior Oghenero Gbaje, then a sophomore, auditioned for a character he knew well: a black man in New York City.

Offstage, students were saying he’d obviously get the part, but not because of his acting — because he was one of the only male students of color in the college’s acting program.

“It’s the issue that it sounds really positive, but it’s not,” Gbaje said. “By saying I’m only getting this role because of the way I look is taking away any acting ability that I have or any of the training that I’ve been doing.”

It’s an experience shared by other students of color in the Department of Theatre Arts, though the department has gotten more diverse since Gbaje was a freshman. Senior Eunice Akinola was told the same thing when she auditioned for a play that had a black female lead character. Freshman Erin Lockett was told she was going to be cast in a show to increase its diversity. All experienced these microaggressions, which their fellow students perceived as compliments.

Lockett, an acting major, said she felt people in the department were very welcoming at the beginning of the academic year but that as time went on, she started to experience and recognize microaggressions from fellow students.

“As the semesters went by, it just got less and less open, and people started saying things that weren’t ok, and I began to realize the underlying cause of that was because I was a woman of color,” Lockett said.

When she was a freshman, Akinola, an acting major, felt the department was lacking in diversity, she said. But she said it was not until after the racial protests during Fall 2015 that she realized how difficult it was to be a student of color in the department. After the protests, she said that she felt like a token when she was cast in shows and that faculty members were casting her to fill a quota.

“It felt like Dillingham, as well as Ithaca College, was under a microscope as a whole, so I felt like I was being used as a token to be in a show, or not be in a show, to prove that we are diverse as a department,” she said.

Akinola said she has faced microaggressions from fellow students. She said that after a meeting held by the students of color in the department, a non–student of color told her the “room looked a little dark,” in reference to the meeting.

Weidner said in an email that the department addresses every microaggression that is reported, and workshops on addressing microaggressions have been held for students, staff and faculty. Students should report microaggressions to faculty or staff or through the bias related–incident process detailed on the Diversity and Inclusion at IC webpage on the college’s website, Weidner said.

“We will address every reported microaggression — if a student lets a faculty or staff member know what’s happened, we get to work, meeting with parties involved to work through these incidents and help prevent them from happening through greater awareness, education, zero tolerance, and fostering a culture that holds us accountable,” Weidner said via email.

Freshman Kellik Dawson said there have been multiple meetings about racism in the department, but the meetings have been optional, so people who think they are not a part of the problem will not attend, although they are often complacent in perpetuating microaggressions.

“It’s mainly the people of color who are going to show up to the meetings, and we don’t have to be told as much about ourselves, compared to the actual racist people,” Dawson said.

Akinola said she thinks her race has prevented her from getting cast in multiple roles. She said that when she thinks about shows the department has put on recently, such as “Arcadia” and “The Cradle Will Rock,” she does not stereotypically imagine people of color playing the lead roles.

“I feel like my race is an obstacle at times when I go into rooms because I have to work 10 times harder to show that I am talented enough to play this role, regardless of my race, and it’s really hard,” she said.

Norman Johnson, associate professor in the Department of Theatre Arts, said the process for selecting shows is done by a committee including faculty from every program and a student representative, beginning a year before the season starts. The casting process for every show happens at the beginning of the academic year, so students audition for all shows at once. He said the department practices “color–conscious casting,” which means unless a character’s race is specified by the playwright, any actor can play that role.

“In 27 years, I have never directed a show where I haven’t had a diverse cast,” Johnson said. “Personally, I have always made it a point to include everyone and to model for the students this theory or belief that anyone can play any role, unless the playwright very specifically has structured the story around the fact that this person is a person of color.”

“Not having someone who looks like us, who is working, is a little baffling and makes me want to take a step back,” Dawson said. “If I am not at least being taught by one black person, or I’m not seeing any black people in the hallways who are my teachers … or hearing about people–of–color alumni, it is kind of hard to believe I am going to do something after school.”

Dawson said they feel that attending the college is emotionally taxing, and they consider transferring every day.

Weidner said the department faces setbacks when tackling issues of race. She said the department plans to continue learning through conversations and workshops and that she hopes to initiate a statement based on the college’s language to put into syllabi.

“We have setbacks and we make mistakes (I sure do), and we want to make more of an effort to find a shared vocabulary and ‘stay woke,’ to support equity and justice,” Weidner said via email.

Adding a statement regarding microaggressions and racial discrimination into department syllabi will not matter if students are not held accountable for their own actions, Akinola said.

The lack of inclusivity within theater has prompted junior Tuan Malinowski, a musical theater major, to make a documentary sharing students of colors’ experiences, he said. Malinowski said his overall experience in the department has taught him to accept himself and gain confidence. He said his documentary focuses on college students entering the theater community, where diversity and inclusion are starting to become a dominant idea.

He said he was inspired to make the documentary after seeing a poster for a production of “Miss Saigon,” a play with a majority of Asian-American characters, that a local high school in his hometown was producing. When he Googled photos from the production, there were many students in yellowface.

“Unfortunately — no surprise — they didn’t have a lot of Asian–Americans, and in order to do the show, I saw a lot of pictures of yellowface — people dressing up to pretend that they’re Asian … so makeup on the eyes, tanning their skin,” Malinowski said. “I think our society has gotten to the point where hopefully blackface is a … red flag, but I’ve noticed … from my experience, yellowface gets brushed under the rug a little more.”

Malinowski said he has interviewed over 35 students and a few faculty members in the department and has over two hours of footage. He said students he interviewed commonly spoke about not wanting to be cast in stereotyped roles and wanting casting directors to look past physical appearances.

As a director, senior Aaron Roberts said that when he is directing shows where race is a theme, he feels it is important to cast actors who are the races of the characters. If race is not a theme in a show, Roberts said, directors must be conscious of the messages they tell through casting so as to not perpetuate negative racial stereotypes  — such as only casting black actors as villains or maids.

“If you’re doing a show … and all the maids are people of color and all the people who live in the house are white, that can be dangerous, and that can continue to put actors of color in boxes,” Roberts said.

Roberts also said that, as a director, the first step in casting considerations is addressing if an actor has the skill to play the role and that what the actor looks like is considered after.

“We’re not giving parts to people of color because they are underrepresented,” he said. “No, we’re giving parts to actors who are incredibly skilled and have been overlooked because of implicit biases in our system.”

Akinola said she is hopeful that within the theater industry, the issues of microaggressions and casting based on color are moving to the forefront.

“I do believe it is all of theater, but we are so disconnected because we are a little school in a college city,” she said. That it is more amplified for us in Dillingham. I do believe this is an issue that has been occurring for a very long time.”

Akinola and Gbaje both said that there are more students of color in the department now than when they were freshmen. Gbaje said this increase of diversity has helped bring to light the issues in the department and foster conversation. But the work is far from done, he said.

“I don’t think the job is anywhere near done, but at least there is a start, and it’s not something that happens overnight, and I think that is something everyone needs to remind themselves,” Gbaje said.

Two organizations in Ithaca held a press conference Nov. 16 to call for the resignation of Judith Pastel, superintendant of the Ithaca City School District. Activists Committed to Interrupting Oppression Now and Race Liberation Alliance organized the conference in response to a student’s suspension after he was involved in another racial incident at Ithaca High…