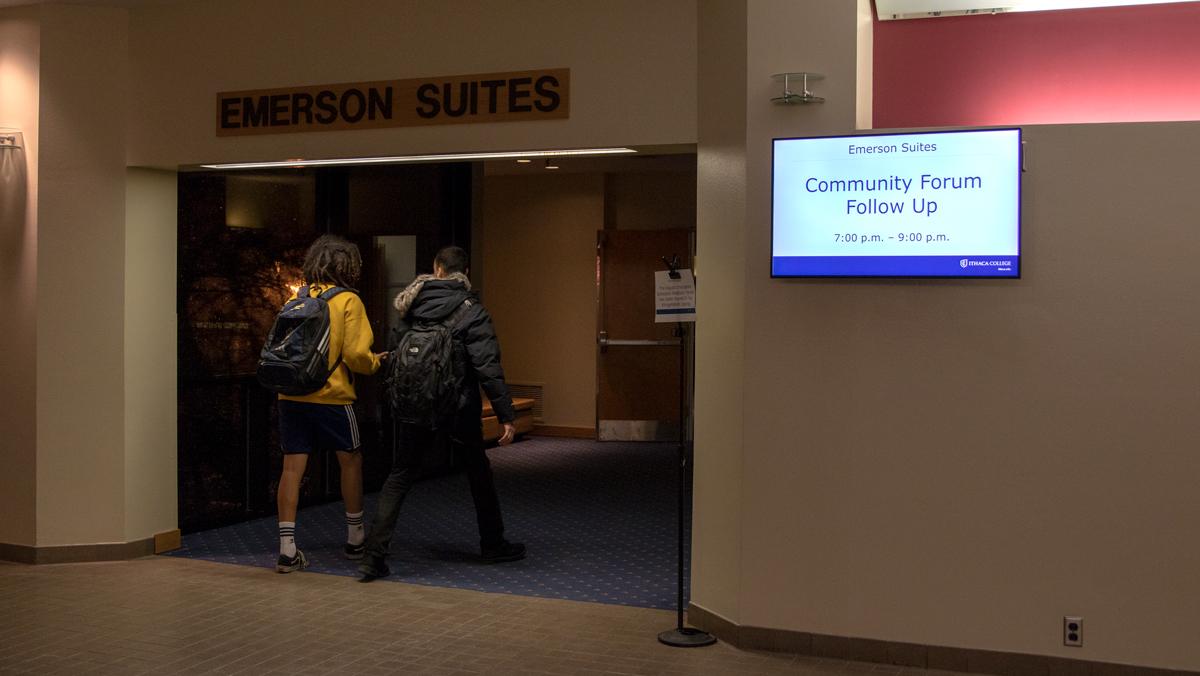 Ithaca College held a follow-up discussion Feb. 6 about a racist video of a student saying the N-word that became popular on social media.

The event was originally scheduled for Jan. 31 but was rescheduled due to cold weather. The discussion was a follow-up to two other conversations that were held by the college in response to the video in December 2018. At the previous conversations, students discussed how the video made them feel and how the college was responding. Some have criticized the college’s response as lackluster.

The video featured a student, sophomore Khush Khemlani, in a Snapchat video using the N-word to describe her skin tone after receiving a spray tan. The video was recorded by others and uploaded to Twitter. Many students at the college reacted negatively and called for the college to take action. The college responded by issuing a statement on Intercom, acknowledging the pain the video produced among many and how common such incidents are in today’s society.

The college did not reprimand Khemlani. Khemlani apologized for her use of the racist language.

At the most recent event, only two students attended.

Freshman Sebastian Chavez, who did not attend the previous events on the topic, said he wanted to know what the administrators in attendance had to say about the video. Going around a set of two tables pushed together that people in attendance were seated around, the administrators’ reactions to the video was a mix of shock, surprise and disappointment.

Chavez said he is worried about what the community will do when racist language is used again. He also said that the lack of students at the event did not put him at ease while talking to the administration members who attended the discussion.

“Where do we go from here? Because it’s going to happen again, and it scares me because you guys set up all these chairs and all these tables, and no one’s here,” Chavez said. “It’s like my family, my students, my classmates have just not cared about this issue, either because they don’t feel, as you said after the first meeting, they didn’t get their voices out, or they feel like they lost their trust, like they’re on their own.”

Nicole Bradwell said that after the video surfaced, she knew she had work to do as an admissions director, as prospective students may have questions about the video. She said she thinks mistakes like the one made by Khemlani can and should be forgiven.

“Being the director of admissions, my work had turned on very quickly,” Bradwell said. “People do wrong things, they make mistakes and is there a way for us to come together to make it better?”

Luca Maurer, director of the Center for LGBT Education, Outreach and Services, said he responded to the video with disappointment, and said he tried to help students by providing feedback and counseling.

Cornish said she expected more people to show up to the discussion based on the attendance at the previous discussions and one held by Sean Bradwell, but said she understands why more did not come.

“Sometimes we are most present at the height of the pain,” Cornish said. “It’s been over a month since that incident happened. I promise you, if another video shows up tomorrow, folks will be expecting us to show up later this week or early next week to address it. We are here, we care, and that’s why we’re here, and we’re here for all of our students, be there two students, three students, or 300 students in front of us. The conversation will continue because it’s going to happen again.”

Collado said it is difficult for the college to prepare for another video to come out and that when it happens, the community must come together to discuss where the college should go next.

“When you think about what keeps me up at night, it’s that thing, it’s like, ‘When’s the next thing going to happen?’,” Collado said. “There’s definitely things we can work on — we can diversify our faculty, we need to make our classrooms better places for people to learn.”