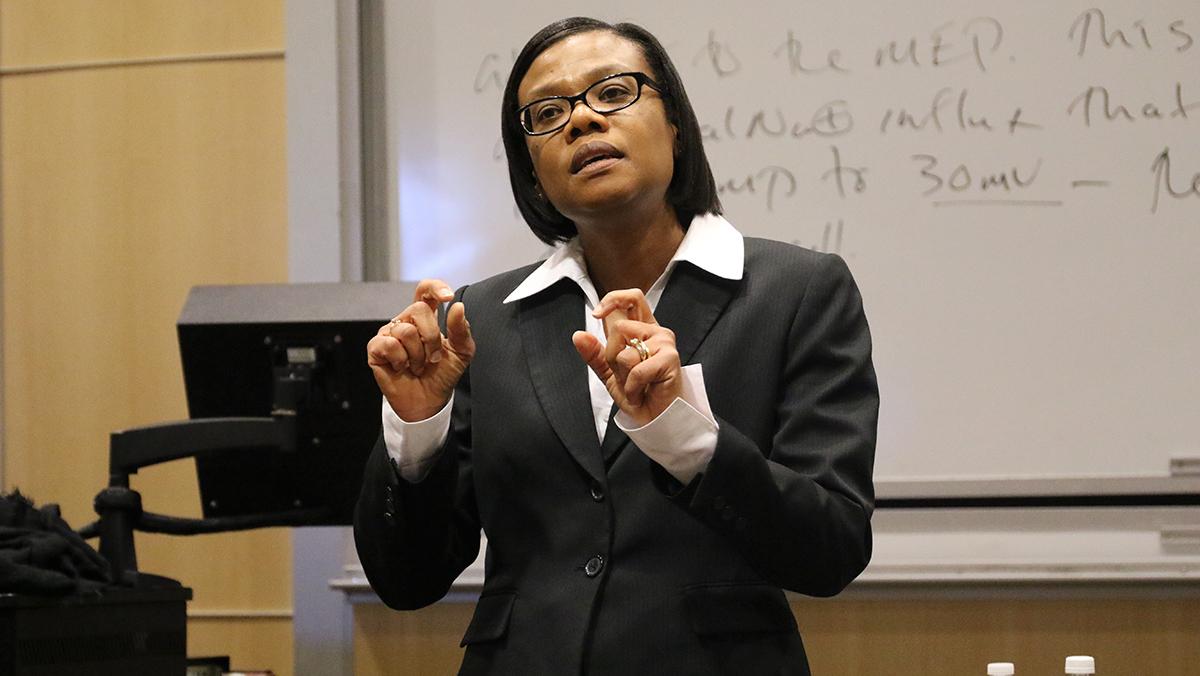 The third of four finalists for the position of dean of the School of Humanities and Sciences came to Ithaca College on Dec. 8 to do interviews and meet with administrators, faculty, staff and students.

Heather Lobban-Viravong, associate dean and associate professor of English at Grinnell College, interviewed to replace Leslie Lewis. Lewis left the college in June to accept the position of provost and vice president of academic affairs at Goucher College in Baltimore, Maryland.

The campus community was invited to an open presentation and discussion with Lobban-Viravong 12:05–1 p.m. in Textor 102 during her campus visit. Approximately 55 administrators, faculty members and students attended the event.

Lobban-Viravong began her presentation with a statement about her student-focused approach to administration.

“I am very firmly committed to the student experience,” Lobban-Viravong said. “I feel that it’s important for me to start this way. I use that as a way to stay grounded in the work that I do as an administrator. It’s important to me to figure out what the students are experiencing and what their concerns are.”

Lobban-Viravong cited her experience as leader of an intervention program for Grinnell students who were not doing well academically. She said she also consistently meets with a small group of first-year students to try to discern what is happening in the student body.

Lobban-Viravong said she was inspired to apply for the dean position when she attended a leadership conference that allowed her to see people from other schools who really cared about the students. She said when she read the document stating the job requirements and qualities that the search committee was looking for, she projected herself into the role.

“It seemed to me that the position description was asking for an individual who was ready to lead,” Lobban-Viravong said. “I think there is something to be said for being passionate about particular issues and bringing a kind of energy to that.”

Lobban-Viravong said though she is a person of color and has had significant experience with diversity issues in her studies of women’s writing and issues of race within literature, she did not come to the college because of the controversy on campus. She said as dean, she would create more opportunities to hear the stories of people of color.

“I think I would be ready for that challenge,” Lobban-Viravong said. “Hopefully I would be able to bring my own experience and some fresh ideas to trying to help the community navigate that. And I am someone who cares about diversity in its broadest sense. In the work that I do, I really try to look for the implications of diversity in everything.”

During the Q&A session, Lobban-Viravong said prospective students need to connect with current students and faculty to increase admissions. She said she would work to fortify H&S by further connecting humanities students to the career development office would implement a simple but effective system of mentoring. She also said she supports shared governance.

Lobban-Viravong ended the Q&A session by asking the students in the audience to characterize what it means to be a student at the college. Sophomore Michele Hau, a member of the search committee, responded by saying students at the college are multi-faceted and engage in further learning across disciplines and extracurricular activities.

“I thought she did a good job of talking very specifically about her experiences at Grinnell and also, to some extent, how those experiences would inform what she would do at Ithaca College,” Bergman said. “I was particularly impressed by the fact that she started and ended with a commitment to the student experience.”

Tatiana Patrone, associate professor in the Department of Philosophy and Religion, was also impressed with Lobban-Viravong’s straightforward speaking approach.

“Concrete answers always helped me,” Patrone said. “I liked that when she had answers, they were specific and concrete, and in terms of ‘Here’s how the programs works: here’s the first step, here’s the second step,’ etc.”

Diane Gayeski, dean of the Roy H. Park School of Communications and chair of the H&S dean search committee, said there are links on the Intercom announcements to online feedback forms and emphasized the importance of submitting feedback before the committee wraps up deliberations this week.

The final candidate for the position will visit the college Dec. 10.