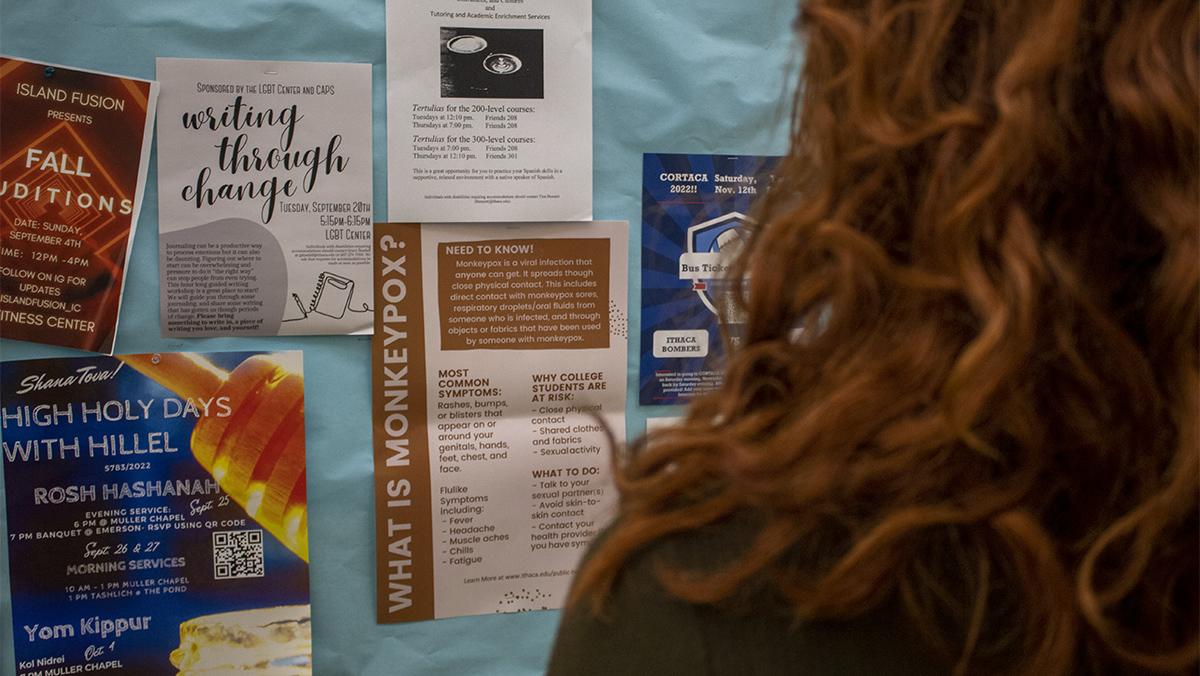 Malik Clement/The Ithacan
The CDC is calling the spread of monkeypox an outbreak because of the increase in case numbers above what is normally expected. In a 2003 monkeypox outbreak, 47 cases were reported within the U.S., which was the first time human cases of monkeypox were found outside of Africa. The U.S. Department of Health and Human Services declared monkeypox a national health emergency Aug. 4.
By Lorien Tyne — Assistant News Editor
Published: September 7, 2022

Despite only three cases of monkeypox being reported in Tompkins County, the Tompkins County Health Department (TCHD) and its campus partners like Ithaca College are working to prevent continued spread of the virus.

According to the Centers for Disease Control and Prevention (CDC), the monkeypox virus appears as a rash on hands, feet, genitals, the chest, the anus or the mouth and can look like pimples or blisters. Monkeypox can also cause flu-like symptoms and is transmitted through close skin-to-skin contact, objects and surfaces used by someone with monkeypox, or contact with respiratory secretions from someone with monkeypox.

The first case of monkeypox in the county was reported by the Ithaca Voice on July 19, the second case July 28 and the third and most recent case Aug. 9. The county first released a warning with information about the viral infection July 1, when cases in New York state were on the rise at 86 total cases. As of Sept. 6, the New York State Department of Health reported 3,326 confirmed cases.

Samm Swarts, associate director of Emergency Preparedness and Response at the college, said there are living spaces set aside in the event that one or more students on campus contract monkeypox, but that he is not able to share where those spaces are. He said COVID-19 had standardized isolation periods — currently five days after testing positive — but with monkeypox there are very individualized health plans that could range from limited isolation to several weeks.

“If a person is able to cover their open pustules or rashes with wound care, then perhaps they may not need to strongly isolate like we did with COVID and they might even still be able to go to class,” Swarts said. “[Monkeypox and COVID-19] are very different illnesses when you think about it in terms of their transmissibility.”

Monkeypox generally lasts from two to four weeks, but Frank Kruppa, public health director for the TCHD, said the CDC guidance regarding isolation and transmission prevention is flexible depending on the case.

“There certainly could be situations where folks [students] would need to take a leave of absence to be away because there just wouldn’t be a way to mitigate the symptoms,” Kruppa said. “It really does depend on the case and it’s not as black and white as it was with COVID.”

There are weekly COVID-19 briefings between the TCHD and its higher education partners like the college and Cornell University, which Kruppa said have now expanded to include all communicable diseases including monkeypox. The TCHD meets both with college administration and campus health centers together.

Data from the CDC shows that men who have sex with men make up a majority of the monkeypox cases recorded thus far. However, monkeypox is not a sexually transmitted disease. Anyone who has been in close contact with someone who has monkeypox is at risk.

“It is unfortunate that a stigmatized population is feeling the brunt of this disease right now,” Kruppa said. “We’ve been working with our local LGBTQ+ organizations that support those populations to help get messaging out, to help understand if stigma is increasing or if there are issues around that, that we need to be aware of.”

Luca Maurer, director of the Center for LGBT Education, Outreach and Services, said via email that monkeypox risk has to do with close contact, not the social identities one holds.

“At the same time, LGBTQ people have historically created formal and informal networks that remain strong, credible sources of public health information within our communities,” Maurer said. “This was, of course, in the past out of necessity and the need to take an active role when our health and well–being was overlooked or ignored by more traditional power structures.”

First-year student Claudie Ouk said the impact of COVID-19 on social connections is one reason they are concerned about the spread of monkeypox.

“I think people are so over having a global pandemic that they don’t want to acknowledge the fact that there is another,” Ouk said. “That’s worrying. Like, the erasure is not going to help. It just makes it worse. My main concern is not being able to see people that I care about or meet people [at college].”

The CDC is calling the spread of monkeypox an outbreak because of the increase in case numbers above what is normally expected. In a 2003 monkeypox outbreak, 47 cases were reported within the U.S., which was the first time human cases of monkeypox were found outside of Africa. The U.S. Department of Health and Human Services declared monkeypox a national health emergency Aug. 4.

First-year student Mette Aarsheim said it has been hard to get clear information about monkeypox, because she said media coverage of the virus is either fear-mongering or lacking concern. Aarsheim said she thinks there could be better education outreach.

“I suppose I would just call some sort of health care professional [if I thought I had monkeypox],” Aarsheim said. “I don’t really know the procedure for it.”

Vaccine clinics in Tompkins County are now available for a limited group of high-risk individuals. Eligibility includes people with exposure to monkeypox within the past 14 days; those at high risk of exposure including gay men and members of the bisexual, transgender, and gender non-conforming community and other communities of men who have sex with men and who have engaged in intimate or skin-to-skin contact with others in the past 14 days; or individuals who have had skin-to-skin contact with someone in a social network experiencing monkeypox activity.

“Even if we had ample vaccines, we would not be recommending that everyone in the general population get vaccinated at this point,” Kruppa said. “We’re just focused on those folks that are most likely to be exposed, so we can try to contain it.”