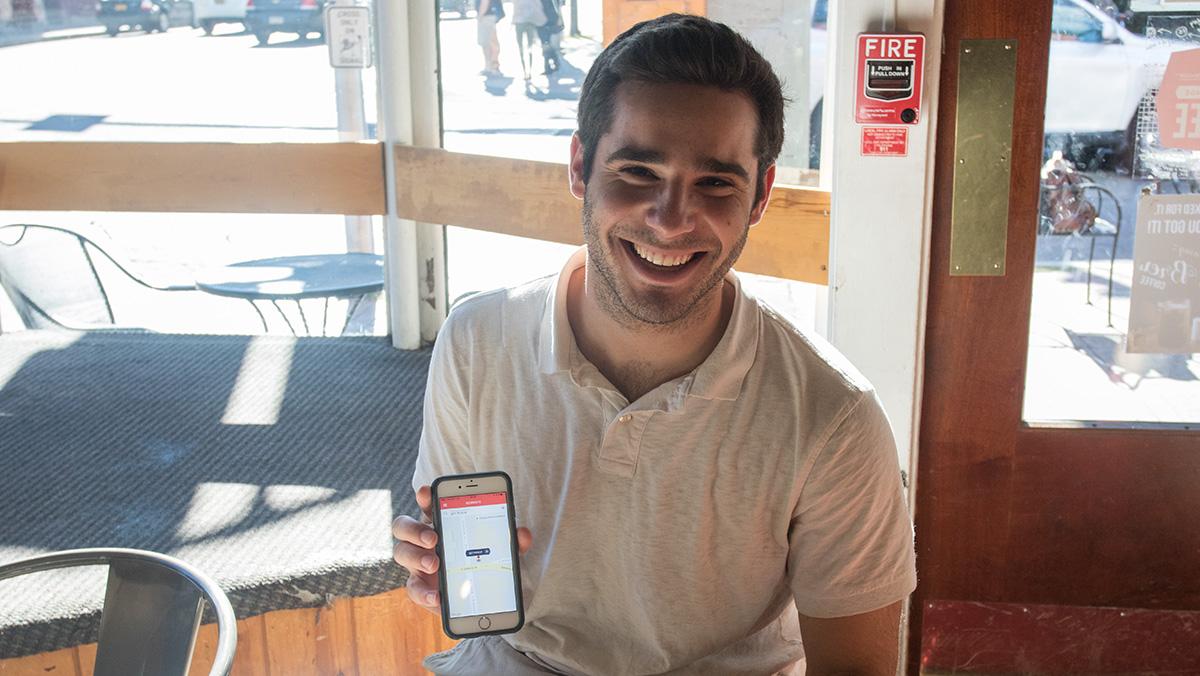 Annie Carlson/The Ithacan
Cornell University junior Brian Schiff developed the app with the help of a friend and an advisor. The app was piloted successfully this summer and is now expanding to the Ithaca area and Syracuse University.
By Lily Donoghue — Contributing Writer
Published: September 13, 2016

This fall, taxis across Ithaca are implementing a new social media–integrated transportation app to make communication with customers more direct and efficient.

Marketing material for RedRoute is being displayed in window stickers and on red flags on taxis around Ithaca. The app is designed by Cornell University junior Brian Schiff. It was piloted this summer in partnership with local cab company Ithaca Dispatch, which owns University, Yellow and Cayuga Cabs.

Though the base model — available on the Apple App Store —  emulates many of the same functions as Uber, Schiff said his app will integrate social media functions such as location, tagging and sharing, in the future.

“This is how we will get into every hand of every 20–year–old in America,” Schiff said.

When a call comes through the app, the precise location is shown on a screen in Ithaca Dispatch’s office, and an employee pushes the call through to the driver. Peter Kadar, one of the owners of Ithaca Dispatch, said this eliminates the human error of inputting the wrong address and makes the transaction easier for both parties.

“When they pop up on the screen, we can track them just like the Pokémon,” Kadar said.

Schiff said he developed RedRoute out of Cornell’s eLab — a program and space where students can receive initial funding and legal help for their projects. He partnered with another Cornell student and an adviser to help shape his app.

After a successful summer with positive feedback, Kadar said, the company is working toward using RedRoute as its primary contact method with its customers.

“It is more effective to us when the app call comes in — the pickup will be quicker because of having the additional information,” Kadar said.

The company is also working on ways to more effectively process app requests, he said.

“Right now, it’s still done manually — we’ll get a request and send a driver — but in the future, we might go fully automated,” Kadar said.

“I personally think it is safer since all of our drivers are licensed through the Ithaca Police Department and have statewide and federal background checks,” Kadar said.

That was the reason, Schiff said, that he partnered with a taxi company instead of, like Uber or Lyft, hiring a fleet of his own drivers.

“We partnered with the largest taxi company in the city — largest, oldest, best,” Schiff said.

Though the app is moving toward a more social direction and thus is separating itself from competitors, the current setup uses qualities similar to Uber when it comes to payment, location pinpointing, wait-time estimation and photo ID of the driver.

“We wanted to show our customers that we could give them the same things as Uber does,” Kadar said.

Schiff said he has not been marketing RedRoute directly to Ithaca College students, so many have not heard about it before.

“I don’t know what RedRoute is, but I’d totally use it,” freshman Anne Carlson said.

But because of positive feedback from RedRoute’s pilot run this summer, Schiff’s team is expanding the app’s use to the greater Ithaca area and to Syracuse University, too.

“It’s actually kind of strategic that it’s not as well–known at Ithaca College,” Schiff said. “A big piece of that is as we build up usage of the app, it’s going to add business to our partner taxi company, and we want to make sure we can meet the demand and have it be a good service for everybody.”

People are not liabilities to be managed by the government. People have potential to be tapped into, and they need a government that allows everyone to live their lives to the fullest.