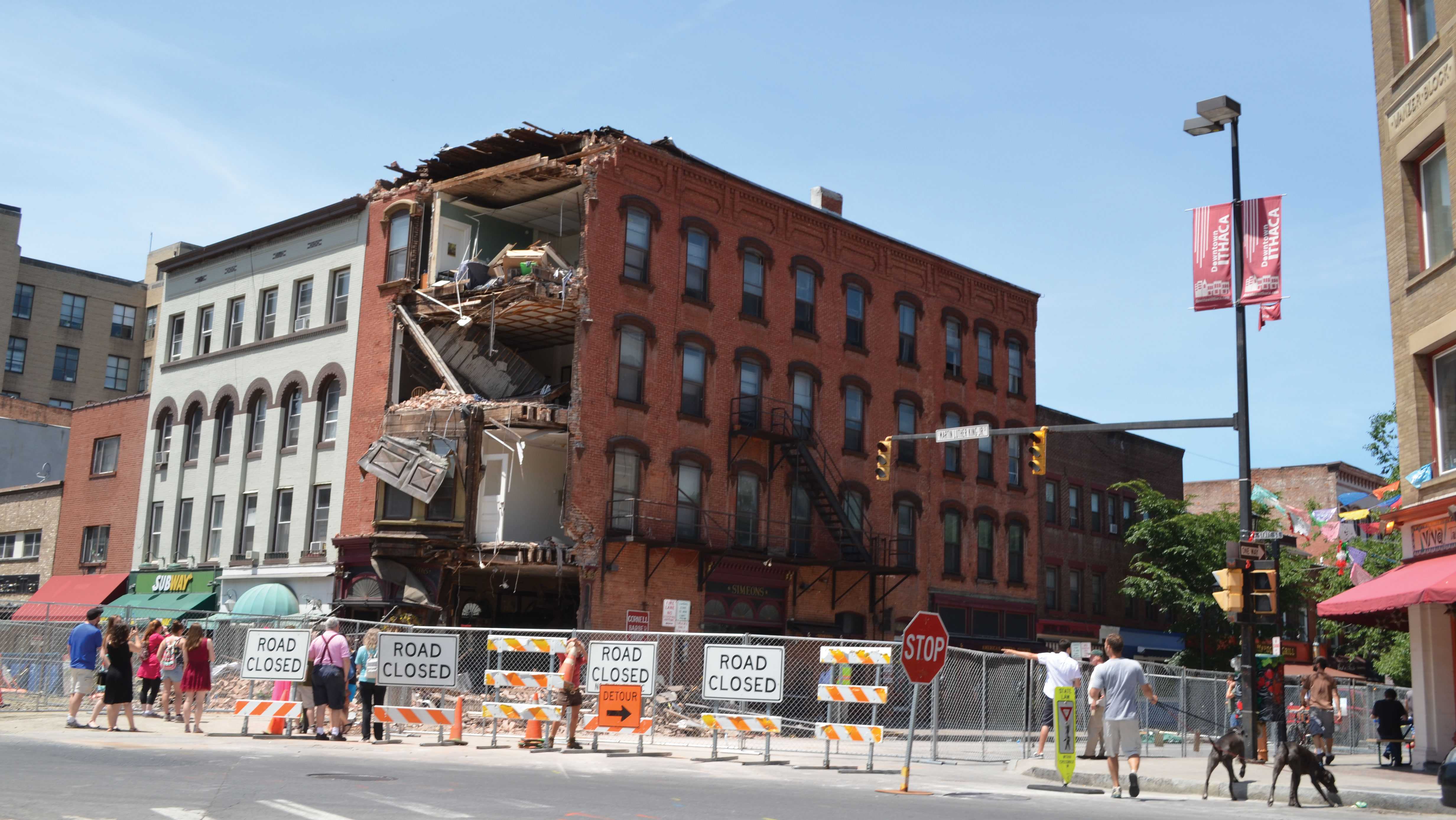 Max Gillilan/The Ithacan
Parts of Aurora and State Streets are blocked off while crews repair the leaning building.
By The Ithacan
Published: June 20, 2014

A tractor-trailer carrying a load of cars crashed into Simeon’s Bistro on The Commons just after 4 p.m. June 20.

The vehicle crashed into the corner of the building, located at the intersection of North Aurora Street and East State Street, while attempting the right-hand turn onto Aurora.

At a press conference held the same day, Jamie Williamson, public information officer for the Ithaca Police Department, and Mayor Svante Myrick confirmed one fatality, whose identity was later confirmed by a press release as 27-year-old Amanda Bush from Lansing, N.Y., the bartender at Simeon’s.

According to the press release, five people were hospitalized for non–life threatening injuries, and the truck driver is in police custody and is cooperating with the collision investigation. 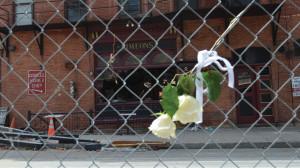 Barriers do not prevent onlookers from sharing their condolences for the injured and deceased. The Ithacan/Max Gillilan

As of now, Williamson said the truck driver has not been charged with any crimes.

“There doesn’t appear to be any alcohol or drugs involved,” he said. “It doesn’t seem to have been an intentional act at all.”

He said the cause of the crash, including whether speed was a factor, is currently under investigation.

“In terms of measurements and analytical data that they have to hammer in and organize is a lengthy process to entirely be able to determine the cause and speed and all that,” he said. “My guess is that it’ll be a couple of weeks before that is confirmed.”

Ithaca Collegesenior Carly Browning, who lives next to Collegetown Bagels on Aurora Street, said she heard the crashbut mistook it for the sounds of construction until she heard ambulances and saw a billow of smoke rising above The Commons.

“I walked around and tried to check it out, but they had police cars parked around it by that point, and you couldn’t really see what was happening,” she said.

What she said she could see was that the building containing Simeon’s and several apartments was leaning on a slant. She said everyone in the building was evacuated.

“Those buildings are so old that they are really quick to get everyone out,” Browning said.

In addition, the entire block surrounding Simeon’s, including parts of State and Aurora Street, are blocked off to traffic, she said.