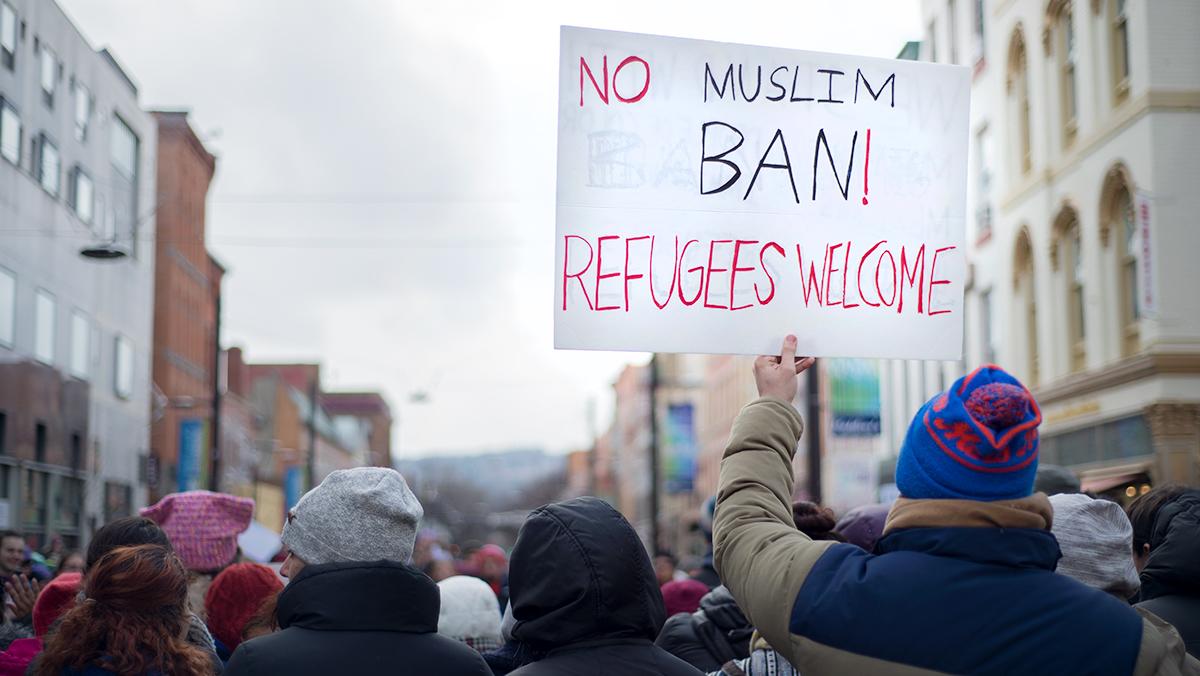 The order restricts travel and bans any refugees from Iran, Iraq, Libya, Somalia, Sudan and Yemen from entering the United States for 120 days, and Syrian refugees indefinitely. Only two students from the college are from the banned countries, according to data from the Office of Institutional Research. Both have been contacted for this article but did not wish to comment.

“To me, the executive order just runs counter to the U.S. being a leader in global community and engaging in a positive way with the rest of the world,” Saunders said.

The Trump administration’s list of countries did not include the countries of origin of known terrorists who have carried out attacks on U.S. soil. The order references the 9/11 attack as a reasoning for the ban, but those attackers were born in Saudi Arabia, United Arab Emirates, Egypt and Lebanon — all countries not found on the list — according to the 9/11 Commission Report.

President Tom Rochon published a statement about the order to Intercom on Jan. 30 stating that the college is not only concerned about the order’s effect on the college’s students and faculty, but how it will ultimately affect higher education. Presidents of Cornell University, Harvard University, the University of Notre Dame and many more have also expressed concern or disavowed the order.

Three refugee families from Syria and Afghanistan were scheduled to arrive in Ithaca in February, but they have been halted by Trump’s order, said Sue Chaffee, program director of immigration services for the Catholic Charities of Tompkins and Tioga. The program has been planning to bring in 50 refugees from Syria, Afghanistan and several other countries to seek refuge in the city.

Senior Zamar Malik is an international student at the college who said he was shocked when he heard about the executive order. While his home country of Pakistan is not currently on the banned list, it could be added because of the loose language of the order, which he said is one of his biggest worries.

Senior Sara Yagan is a first-generation American whose parents were both born in Syria. While Yagan and her parents are dual citizens of the United States and Syria, she said the executive order strikes a chord with her.

“When I first heard about the executive order, it was almost a shock,” she said. “It’s like when you can’t believe something is true at first, and then I just couldn’t comprehend why it was happening.”

There is currently confusion about how the ban would affect travelers with dual citizenship like Yagan. Initially, a state department official told CNN dual–citizenship holders would be barred, then flip-flopped and said they would not be. On Jan. 31, U.S. Customs and Border Patrol issued a directive explaining that everyone is being “treated according to the travel document they present,” meaning someone with dual citizenship can present their U.S. passport and be admitted.

Yagan said she was surprised by the executive order because of what it could mean for visiting and traveling to Syria, a country she is also a citizen of.

“If this had happened 25-plus years ago, I would not have had the life I have,” Yagan said. “I am so lucky to live here with my parents, and everyone overseas believes in the American dream more than most Americans.”

Now, Yagan is making what she called “peace pins” to sell to students on campus. The proceeds of the pins will go to refugee Syrian families who are moving to Ithaca.

As for Malik, he said that while he and other international students are worried about how the order might affect their lives, he is trying to be positive and deliver advice to those who may feel their opportunity to experience the American dream is now not available to them.

“I’ve been saying one thing to a lot of my friends. … I’ll always love Pakistan, but the United States has been a second home to me,” Malik said. “And I want my friends to experience the wonders of American liberty.”