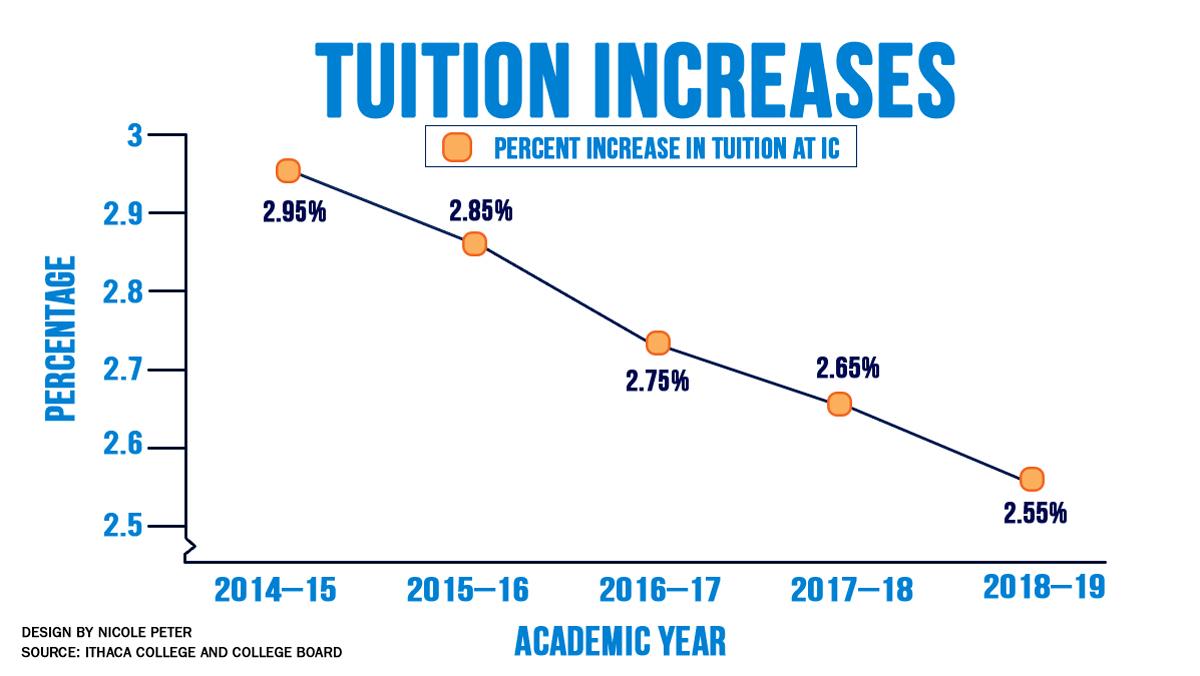 The Ithaca College Board of Trustees has approved the tuition for the 2018–19 academic year, which reflects both an increased cost of attendance and an increased financial aid budget.

The planned tuition is $43,978, which is a 2.55 percent increase from the 2017-2018 tuition of $42,884. The percentage of increase is lower than previous years, compared with the increase of 2.65 percent last year, 2.75 percent two years ago and 2.85 three years ago, said Janet Williams, interim vice president of finance and administration.

The Board of Trustees established the tuition for next year during the fall semester rather than the spring semester, which is a change that was implemented last year. Starting in 2016, the U.S. Department of Education released the Free Application for Federal Student Aid three months earlier than past years, Oct. 1 rather than Jan. 1, Williams said. The college has decided to release its prices earlier to align with the beginning of the application process for prospective students, she said.

The increase in tuition helps pay for the college’s programs, employees and non-salary expenses, Williams said. She said that over 90 percent of the college’s revenue comes from student payments, including tuition, room and board. Williams said the college adjusts its spending every year and attempts to align it with the changing revenue.

Even though the increase is lower than previous years, the high tuition rate is still concerning to students, such as freshman Miranda Allen.

“As a child of a single-parent family who comes from not the richest place in the world, this is kind of alarming to me,” Allen said.

Allen said that although she does have academic and need-based scholarships, she is concerned that she may have to take out more loans in the future to afford attending the college.

Junior Carlie McClinsey, the Student Governance Council president, said the tuition increase has a negative impact on students, but the college is being strategic in the decisions it makes to be able to sustain and improve itself without imposing a dramatically large increase on students.

“Tuition increase always affects students negatively because Ithaca is already so expensive,” she said. “But I am really proud that the college figured out a way to increase it by a super–low amount.”

Despite the increase in tuition, the financial aid budget is the highest it has ever been at $126 million, which speaks to the college’s high-tuition and high-aid finance model, Williams said.

Williams said the freshman discount rate, — the portion of total tuition and fee revenue channeled back to students as grant-based financial aid — for the 2018-2019 fiscal year is 52.6 percent and the total undergraduate discount rate is 48.6 percent, which she believes is an important step in keeping the college’s education affordable to students.

“The discount rate is increasing because we want to make sure that our education is affordable,” Williams said. “That is the number-one reason. We want to attract students to Ithaca College. We know that students and their parents are price-sensitive.”

The New York State Tuition Award, a new scholarship created by the college, will be implemented for the 2018-2019 academic year. This award assists New York State residents with up to $6,000 per year, funded by the college, Williams said. She said the benefit of this award is that it does not have the same restrictions as comparable awards like the State University of New York Excelsior Scholarship, which requires residence in New York State after graduation or the possibility of the award turning into a loan. Additionally, the college’s award applies to more students, including those with incomes up to $125,000 rather than $100,000.

McClinsey said the introduction of these scholarships allows for a more diverse range of students to come to the college, despite its already high cost.

“Financial aid is an expense, just like any other expense,” Williams said. “So, we have to afford our financial aid within our total revenues.”

President Shirley M. Collado stated in an email that the college is attempting to keep these increases reasonable for students while still generating revenue to support the college.

“I am very cognizant of the struggles that some students face when it comes to affording a college education, and I assure you that we are working very hard to contain these costs while at the same time investing in the people, programs, and facilities that make an Ithaca College education so worthwhile and valuable,” she said.