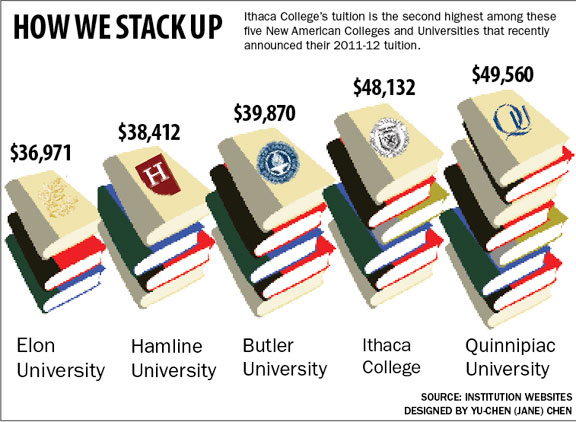 Carl Sgrecci, vice president of finance and administration, said the college is trying to maintain a stable enrollment while also covering operational costs.

“The reality of life is that employees are expecting a reasonable increase in their salaries,” Sgrecci said. “The other realities are the utility companies are going to be charging us more to heat and power the institution. Most of the expenses the institution incurs — trying to deliver on the educational mission to you students — can go up.”

Sgrecci said 96 percent of the college’s revenue comes from fees charged to students from tuition, room and board, as well as spending at on-campus food and retail stores.

President Tom Rochon said the college compares its tuition to 20 similar colleges and universities where they see students apply. The college’s tuition is still less expensive than 16 of those institutions’ 2011-12 rates, according to a letter sent to parents this week.

“We like that position,” he said. “We want to be a good value to students.”

Freshman Karly Redpath said she was not aware the college usually increases tuition every year until they announced the new rate this week.

“The tuition here is high, and it’s going to get higher,” she said. “I don’t know if that’s going to affect anything I do, but I love it here.”

Junior Ellis Williams said he worries that the increasing cost of tuition could prevent some people from attending the college. He said the college’s expansion, through initiatives like IC 20/20 and the center in New York City, will drive up costs and exclude potential students who don’t have the means to pay for it.

“Students who potentially may be able to come to this campus know that it’s all about money at the end of the day,” he said.

The budget also allots $88 million for institutional financial aid, according to a statement from the college.