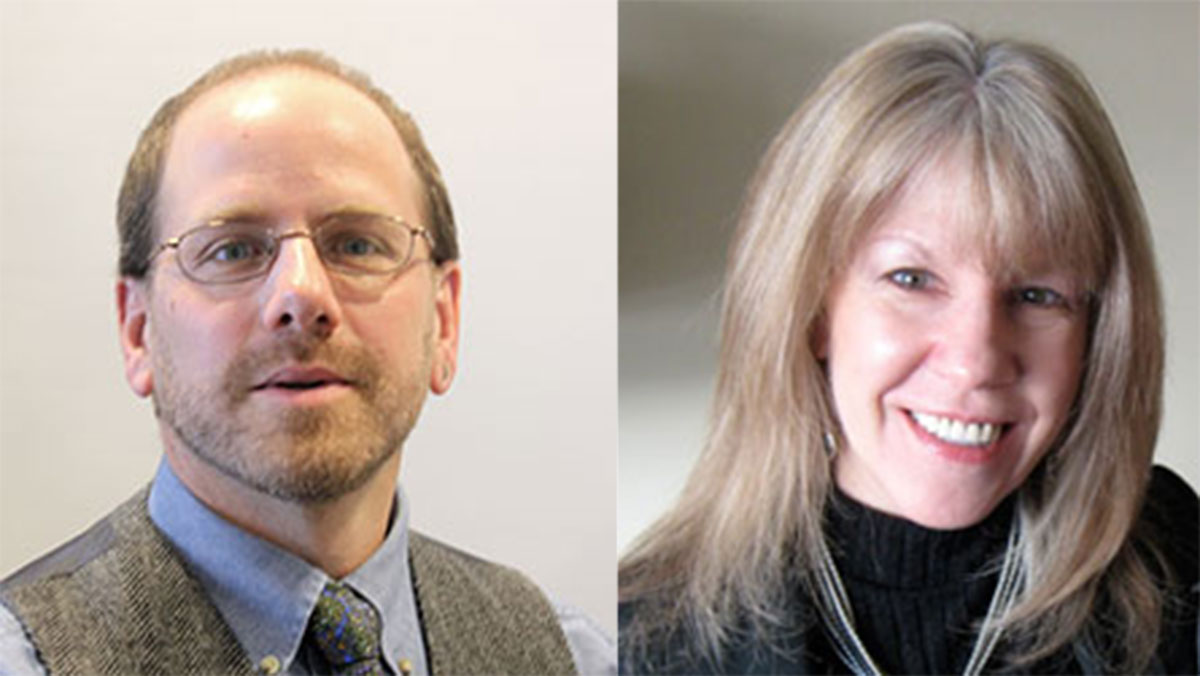 From www.ithaca.edu
From left: Tom Pfaff, Honors Program director and professor in the Department of Mathematics, and Patricia Spencer, faculty director for service learning in the Office of Civic Engagement and assistant professor in the Department of Writing, will step down from their positions claiming a lack of support from the Ithaca College administration.
By Kyle Arnold — Assistant News Editor
Published: May 4, 2016

Two Ithaca College faculty directors have announced they will be stepping down from their positions, claiming a lack of administrative support from the college.

After 21 years at the college, Patricia Spencer, faculty director for service learning in the Office of Civic Engagement and assistant professor in the Department of Writing, said she will resign from the college at the end of this semester, claiming the college violated an agreement regarding her administrative position. Thomas Pfaff, Honors Program director and professor in the Department of Mathematics, announced April 28 in an email to honors students that he will be stepping down from the director position after the fall semester following disagreements on compensation with the Office of the Provost over the past year. Pfaff will still remain in his role as a faculty member.

Spencer said after “egregious contract negotiations,” she has decided to resign from her administrative and teaching positions. She said she came to her decision following negotiations over the renewal of her contract for the 2016–17 academic year for her administrative position. She said Benjamin Rifkin, provost and vice president for educational affairs, had agreed in an email in February to renew her contract as faculty director for civic engagement, which would be the sole leadership position in the OCE beginning in the 2016–17 academic year.

Spencer said Rifkin had to bring this agreement to President Tom Rochon, who consulted with the President’s Council, then relayed his decision to Rifkin. Spencer said Rifkin informed her on April 26 that the position would change to a full-time administrative director and would be opened for a national search.

“[Rifkin] went to the mats for this, and he lost,” Spencer said. “And because he lost, I lost.”

“I would have to go through a search for a position that essentially I have been functioning within for the past year,” she said. “This was a total ambush for me.”

Amanda Lippincott, assistant to the president, said Rochon could not comment because both Pfaff’s and Spencer’s positions report to Rifkin. Rifkin also declined to comment. He stated via email: “The questions you are asking are about personnel matters. It is Ithaca College policy that personnel matters are confidential.”

Spencer said she and Pfaff are taking a “stand” by leaving their positions.

“What Tom and I are both trying to say is we need to talk about respect on this campus,” she said.

Pfaff made his official statement to the administration through a letter of resignation he sent to the Honors Program Steering Committee — an elected advisory committee — on April 28. He said the requirements of his position have expanded as the Honors Program grew in size beginning in the 2013–14 academic year. Because of this, he has been working weekends, facilitating summer programs, going on retreats and publishing the Honors newsletter, among a growing list of other duties. He said the Honors Program Steering Committee compiled a report at the end of the 2014–15 academic year urging Linda Petrosino, then-interim vice provost, to increase Pfaff’s compensation both financially and in recognition of his expanding responsibilities.

Stewart Auyash, associate professor and chair for the Department of Health Promotion and Physical Education and steering committee member, said that when Rifkin was hired in the summer of 2015, he acknowledged the report, which cited the recommendations for him to review, but the protests in the fall pushed off further progress. The committee and Rifkin reconvened in mid-January 2016, when, Auyash said, Rifkin wanted to form another task force to review Pfaff’s and other program heads’ positions to evaluate the possibility of an increase in compensation. The steering committee agreed to this second review, Pfaff said in his resignation letter.

However, Auyash said that when the report came back after review and was presented to the committee on April 22, Rifkin said it was out of his control to increase the budget, despite the recommendation by both committees to increase compensation.

Going forward, Pfaff said he is worried about the Honors Program’s maintaining its “high quality and standards” if it cannot receive adequate funding and administrative support.

Pfaff said the main reason for stepping down, however, was due to his interactions with the Office of the Provost.

“After our […] meeting with the Provost, I was left with absolutely no confidence in Ben’s ability to function as the lead academic officer on this campus and to provide the support necessary, to Honors and supporting units, for an excellent Honors Program,” Pfaff stated in his letter. “Our Provost has created an environment devoid of collaboration and collegiality and has alienated some of the most valuable personnel on campus.”

In his resignation letter, Pfaff cited what happened with Spencer as an example of administrative devaluation.

“Unfortunately, Pat acted in good faith and was greeted with humiliation,” he wrote.

Spencer said she had the ability to return to the writing department full-time or participate in the national search process, but chose to resign because of the “denigration” of the administration’s actions.

“This is not what we had been talking about all year or what I had agreed to,” she said. “This has broken my trust in the central administration. … You can’t treat people like this and expect people to hang around and take one for the team.”