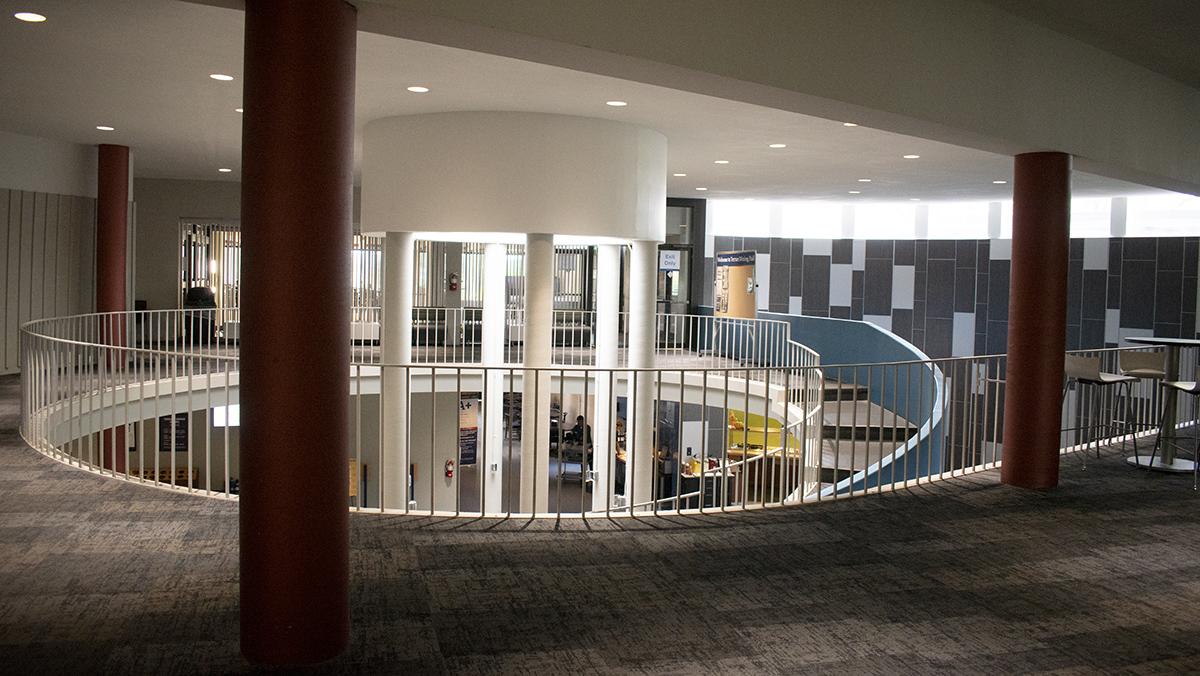 Kalysta Donaghy-Robinson/The Ithacan
President La Jerne Cornish said the symbol has been on the door since August 2021 and was not reported until Oct. 6.
By Clare Shanahan — Assistant News Editor
Published: October 7, 2022

The Ithaca College campus community was notified via email Oct. 7 that a swastika was scratched onto the door of a Kosher Kitchen storage room in the Terrace Dining Hall, but President La Jerne Cornish said the symbol has been on the door since August 2021 and was not reported until Oct. 6.

“It is especially disheartening to learn of this targeting just after Yom Kippur — the holiest day of the Jewish calendar — comes to an end,” Cornish said in the email. “Antisemitic, racist and other threatening symbols, words, behaviors and ideologies are unacceptable and should find no home on our campus.”

Dave Maley, director of Public Relations, said the person who reported the swastika to the Office of Public Safety said the image has been present on the door since August 2021 and was informed that in the future they should report any incidents immediately.

Lauren Goldberg, executive director of Hillel at Ithaca College, said via email that she and Hillel are available to support students and will be increasing educational programming on antisemitism at the college in response to this incident.

“It’s hard to find the words, because this hate symbol brings up so much,” Goldberg said via email. “Anger, to start, but then a kind of heart-wrenching recognition that this is also happening all over the world. Jewish people are tired. We’re scared and sad, and this touches a collective memory that is still extremely traumatic for so many of us.”

Goldberg said she encourages campus community members to be mindful of their Jewish friends and hold conversations about how they are being affected by this incident.

The Office of Public Safety is investigating the incident as a hate crime because it is specifically targeted toward a program that supports Jewish students at the college. According to New York Penal Law, an incident is considered a hate crime when the person committing the crime does so “in whole or in substantial part because of a belief or perception regarding the race, color, national origin, ancestry, gender, religion, religious practice, age, disability or sexual orientation of a person, regardless of whether the belief or perception is correct.”

The incident is the fourth report of a swastika being drawn on the college campus in 2022, and the first that has been considered a hate crime, although an incident in February 2022 was investigated as a potential hate crime. Maley said the February incident was determined to not be a hate crime based on the Clery Act, which defines a hate crime as “a criminal offense that manifests evidence that the victim was intentionally selected because of the perpetrator’s bias.”

An incident of aggravated harassment was reported Aug. 28, according to the college’s public safety log, that involved a swastika being drawn in condensation on a vehicle in the S-Lot. Bonnie Prunty, vice president of Student Affairs and Campus Life, said the campus community was not informed of the incident via a campus–wide communication. Prunty said her decision was based on the facts that the swastika was not drawn in a public location likely to be seen by a large portion of the campus community and that the victim did not view the incident as an intentional act of bias against them.

Cornish said anyone with information regarding the Oct. 6 incident should contact the Office of Public Safety at 607-274-3333 or anonymously at 607-274-1060. Cornish also said that anyone who experiences antisemitism or bias at the college or via social media should complete a bias impact report. Goldberg said anyone who needs support can contact Hillel via Instagram, by email at hillel@ithaca.edu or by visiting its office in the Muller Chapel.