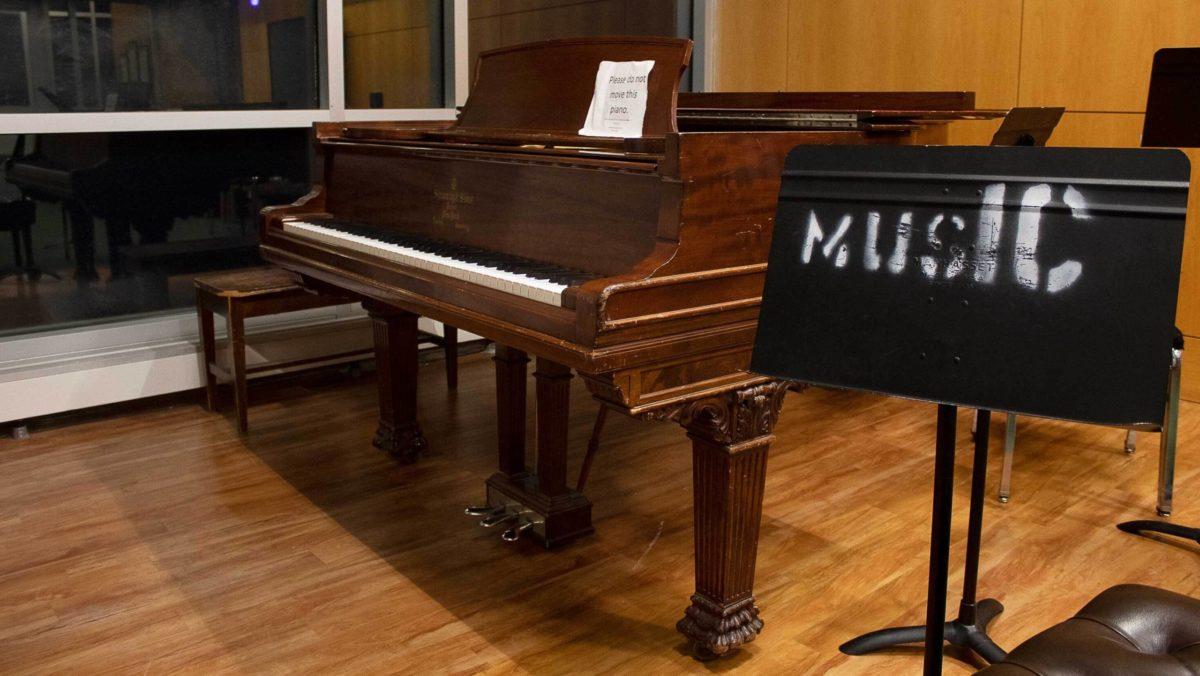 Malik Clement/The Ithacan
According to a Public Safety Alert sent via email to the college community Nov. 4, the three swastikas are being investigated as vandalism of property and possible hate crimes.
By Clare Shanahan — Assistant News Editor
Published: November 4, 2022

According to a Public Safety Alert sent via email to the college community Nov. 4, the three swastikas are being investigated as vandalism of property and possible hate crimes.

The swastikas were found spread between two music practice rooms on a door, a music stand and a piano, according to the email. The first reported incident was of two symbols that were believed to be created before the evening of Nov. 2. The second reported incident was of one symbol that was believed to be created before Nov. 4.

In a Nov. 4 email to the campus community, President La Jerne Cornish said the college has taken new steps in response to these incidents. The college has created a Task Force on Antisemitism and Hate Symbols to decide on immediate and long-term actions to combat antisemitism and hate crimes on campus. This initiative was recommended to the college when it participated in the Hillel International Campus Climate Initiative during the 2021–22 academic year.

“Let me be clear: These cowardly and despicable actions, as condemned recently by the IC Faculty Council, will not be tolerated,” Cornish said in the email.

Cornish also said the college will receive additional security cameras between Nov. 4 and Nov. 18 that will be installed before or during Thanksgiving break, which is Nov. 19–27.

“Those found responsible for committing or assisting in these reprehensible acts of hate will be held accountable,” Cornish said in the email. “We believe that there are people on our campus who have knowledge of these disturbing crimes and we urge those with any information to contact Public Safety.”

Anyone with information should contact the Office of Public Safety and Emergency Management at 607-274-3333 or can leave an anonymous voicemail at 607-274-1060. The college also encourages anyone who has experienced an incident of bias to report it by completing the Bias Impact Reporting Form.

Cornish said in the email that the college will also host two upcoming events in response to the reported incidents. The first will be a campus-wide gathering at 5 p.m. Nov. 7 in the Klingenstein Lounge, Campus Center, facilitated by the Office of Student Equity and Belonging, the Office of Religious and Spiritual Life, and Hillel at Ithaca College. The second will be an event on the Historical and Contemporary Manifestations of Antisemitism and their Impact on Nov. 15 in the Whalen Center. The second event will be held in the Whalen Center because it has been the location of multiple recent reported incidents.

Anne Hogan, dean of the School of Music, Theatre, and Dance, said via email that she supports Cornish’s message to the campus community and encourages community members to attend the campus-wide gatherings.

“I would like to strenuously reinforce President Cornish’s message that these repeated hate incidents across campus, including at the Whalen Center for Music, are intolerable, and there is a continued, concerted effort among our campus leaders to not only investigate but to educate,” Hogan said via email.