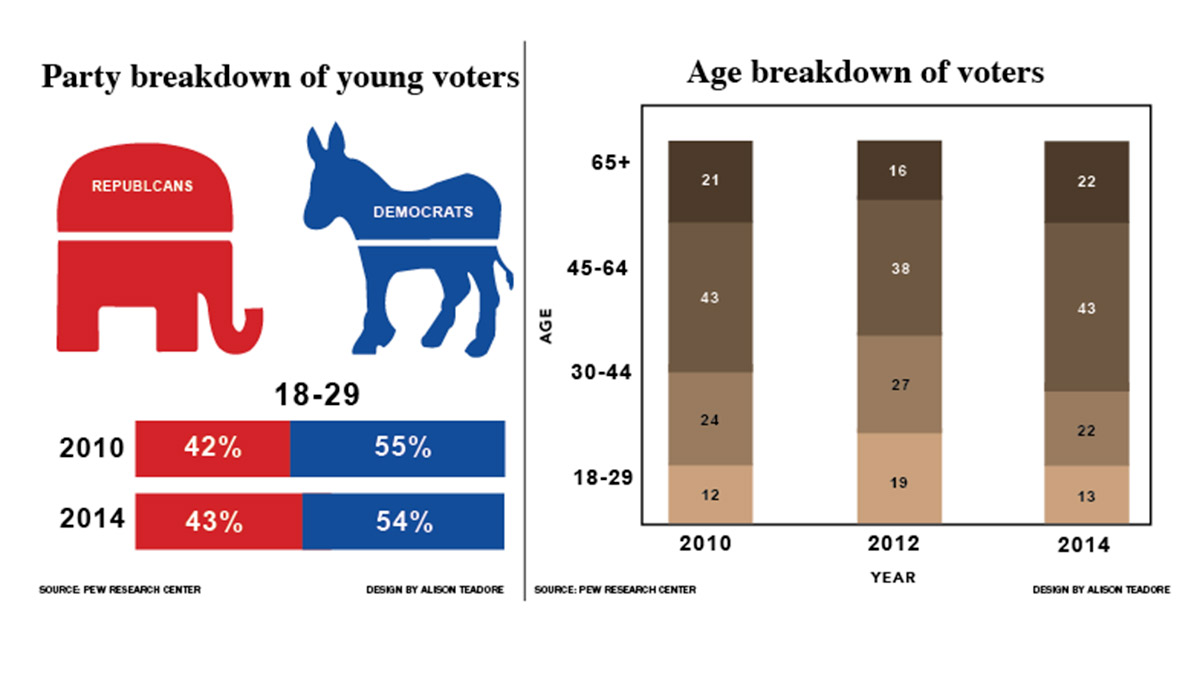 Voter turnout in the 2014 midterm elections, 36.4 percent of those eligible, marked an all-time low since World War II, when it was 33.9 percent, according to the United States Elections Project.

Senior Jonathon Cummings, senior class co-president and president of Ithaca College Democrats, said he noticed that around 3 p.m. when he checked to see how many ballots had been cast at the voting station in the Circles Community Building, about 285 people had voted.

“The thing is, a lot of ballots were cast, but were a lot of them from students?” he said.

Kari Stamm, deputy commissioner from the Tompkins County Board of Elections, said between districts 12 and 3, 512 votes, excluding absentee ballots, were cast in the Circles Community Building for the 2014 midterm elections. In contrast, 791 votes were cast in the building for the 2012 presidential election, but the county underwent a redistricting process after that election.

Cummings said students don’t really focus on the midterm elections because they aren’t as well-known and don’t gather as much attention as the presidential elections. He said when he went to vote on Nov. 4, he saw more elderly people than students voting.

According to the Center For Information and Research on Civic Learning and Engagement at Tufts University, 21.5 percent of citizens ages 18–29 voted in the 2014 midterm elections . In addition, Peter Levine, director of CIRCLE, said the majority of the young voters are students.

In comparison about 45 percent of people ages 18–29 voted in the 2012 presidential election, according to the U.S. Census Bureau.

Schupp said the location that students register in is where they have to vote, which means students who register elsewhere won’t be able to vote in Tompkins County. She said this could also affect how many students on campus vote at all, because it adds one extra step. In addition, Schupp said she noticed on more than one occasion, students have filled out the voter registration form incorrectly by putting in their dorm room number instead of a street address.

Though voter turnout among students has been low over the past decade, the impact will be felt in higher education with the change in leadership in the Committee of Health, Education, Labor and Pensions in the U.S. Senate.

Sarah A. Flanagan, vice president for government relations and policy at the National Association of Independent Colleges and Universities, said the main objective of Lamar Alexander, the new Republican ranking member of HELP and soon-to-be chairperson of the committee, is to simplify financial aid for students.

In order to do this, Alexander plans to simplify the Free Application for Federal Student Aid in order to make it easier on students who have to fill it out. In a Q-and-A with Kelly Field, reporter for The Chronicle of Higher Education Alexander said the only two questions needed to get most of the necessary financial information about a student are about family size and income.

“We may not be able to reduce the number of questions to two, but surely we can be closer to two than 108, and save high-school counselors, college administrators, families, and students a lot of time, and remove a barrier to access,” he said.

However, Flanagan said there are a few concerns with this approach.

Currently, senator Tom Harkin is the committee chair of HELP and is a representative of the Democratic Party. He supports increasing federal aid programs such as the Supplemental Educational Opportunity Grant and Perkins Loan Program, which provide extra aid to students who demonstrate financial need.

However, Flanagan said Alexander wants to get rid of the SEOG and Perkins loans in order to further simplify student financial aid, but this could negatively affect students by causing them to lose money they currently receive.

In an attempt to reach out to students before the elections, Cummings said IC Democrats canvassed around the Circle Apartments on Sept. 28 with roughly 50 forms for students who wanted and needed to register to vote. He said approximately 23 people signed up on the spot, while a few others said they would mail the form. In addition, he said they made announcements in their classrooms and asked around to find students who wanted to register to vote but were never given the opportunity.

All of the forms had to be submitted before Oct. 10 in order for students to be able to vote in the midterm elections. Cummings said whether students registered on time or at all would unavoidably affect outcome of who voted.

According to data from the Pew Research Center, young voters, including both students and non-students, have consistently favored the Democratic Party over the last decade, although the Republican cohort has been increasing.

However, sophomore Josh Kelly, chairperson of IC Progressives, said he believes the two-party system is a large contribution to low voting rates among students. He said this generation of students is significantly more individualistic and therefore requires a third party to represent them.

Senior Ivy Stevens said she wants to see more announcements about the candidates on student social media before the elections instead of after.

“WICB did a report on the two candidates, but they had done it after the polls had already been closed,” she said. “You get really isolated on campus, and I personally didn’t think my vote would be valid because I didn’t know anything about the people I was going to be voting for.”

In addition to engaging students more beforehand, Kelly said the voting station should be moved to a more central location on campus for students because it could lead to an increase in student involvement in the voting process.

However, Steve DeWitt, democratic commissioner of elections from the board of elections in Tompkins County, argued the location in the Circle Community Building is a better spot for Ithaca community members because if it were located in one of the academic buildings, the older voters would have more trouble gaining access during the busy hours of the day.

Similarly, Schupp said there should be more advertisement for the midterm elections by having speakers on campus, talks in class and more students organizations should program around it in order to spark more student interest.

“I get dismayed about voting because women didn’t have the right to vote for so long,” she said. “So I think it’s kind of a right that you need to take advantage of. I think voting is important because it shows sometimes that — in Tompkins County is a good example — a third party might be needed.”