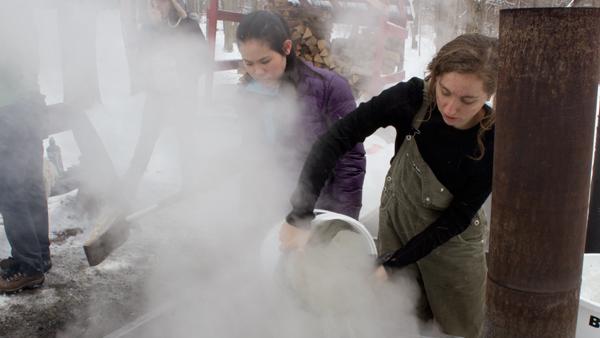 Because of the varying weather conditions this winter season, maple syrup production on the Ithaca College Natural Lands is predicted to be the best season they’ve had, and students in the Natural Resources and Ecology class are reaping the benefits.

The students, who produce non-timber forest products like maple syrup, honey and edible mushrooms for South Hill Forest Products, have had a steady sap collection this year and hope to see an increase from their collection last year.

Last February, vandals damaged the sugarbush trees and taps, costing them about $300. The class lost 30 to 40 gallons of sap after about 40 of the taps were destroyed. The class had to come up with the money to replace all the damaged equipment, which really set them back last year.

At the end of Rich Road, a 30-minute walk from campus, students tap more than 100 trees. To make the maple syrup, students take turns going the the Natural Lands to check the taps and empty them into larger barrels. This process occurs every day.

When there is anywhere from 120 to 200 gallons of sap collected in the barrels, students schedule a boil to take the sap into the next step in the process.

A boil consists of two large containers that are lit with firewood. The students take shifts chopping wood, maintaining the fire and watching the sap. The purpose of a boil is to eliminate water in the sap and increase the sugar content to the ideal 65 to 69 brix, a maple syrup specific measure of sugar content. This process usually lasts through the day and well into the night, often up to 24 hours.

Once the boil is complete, the sap goes into the lab, where students use hot plates to reach the ideal sugar content. The final product is maple syrup. Then it is bottled and ready to sell.

Jason Hamilton, associate professor and chair of environmental studies and sciences, said students become “employees” of a student-run business during the course.

Junior Stephanie Bartzick, a teaching assistant for the class, said everything is student run, and Hamilton gives them the power to move the class in any direction they want to.

Sunday was junior Carolyn Comber’s first boil. She worked with the veterans like senior Danielle Prizzi who taught her how to chop wood safely. Junior Kanoa Ishihara taught Comber how to control fire and manage coals.

“It’s really cool to learn something like this hands on versus just reading about it,” Comber said.

The first boil of this year turned 120 gallons of sap into three gallons of syrup, which is the largest boil the group has ever done, Bartzick said. They owe it all to the weather.

“The past couple of weeks have been so cold that the sap really hasn’t been flowing,” senior Ian Bidwell, also a teaching assistant for the class, said. “We need to have nights where the temperature is below freezing and days when the temperature gets up to high 30s, low 40s for the sap to actually run. We haven’t had those conditions for the past couple of weeks. But now, with the weather being what it’s been, we’ve been having a lot of sap flowing.”

Hamilton said the process is weather dependent. Their success depends on the weather being just right for the sap to flow steadily. The key is the sap freezing during the night and thawing during the day.

They hope to break their previous record for most gallons of maple syrup produced in a season, which is currently at 10.5 gallons from last year.

Since the program began in 2008, the state of New York has seen an overall increase of 26 percent of maple syrup production, according to the National Agricultural Statistic Service.

On April 6, the group will host its annual open house, which is open to students, faculty and members of the community to come experience everything they have to offer about the maple syrup making process, including tours of the sugarbush and pancakes to eat with the maple syrup.

The entire process and production of non-timber forest products involves many different groups, Hamilton said. In the end, everyone works together and the product has a high value.

“The whole maple syrup production at IC is this fantastic synergy that takes place between the department of environmental studies and sciences and Ithaca College Natural Lands,” Hamilton said.