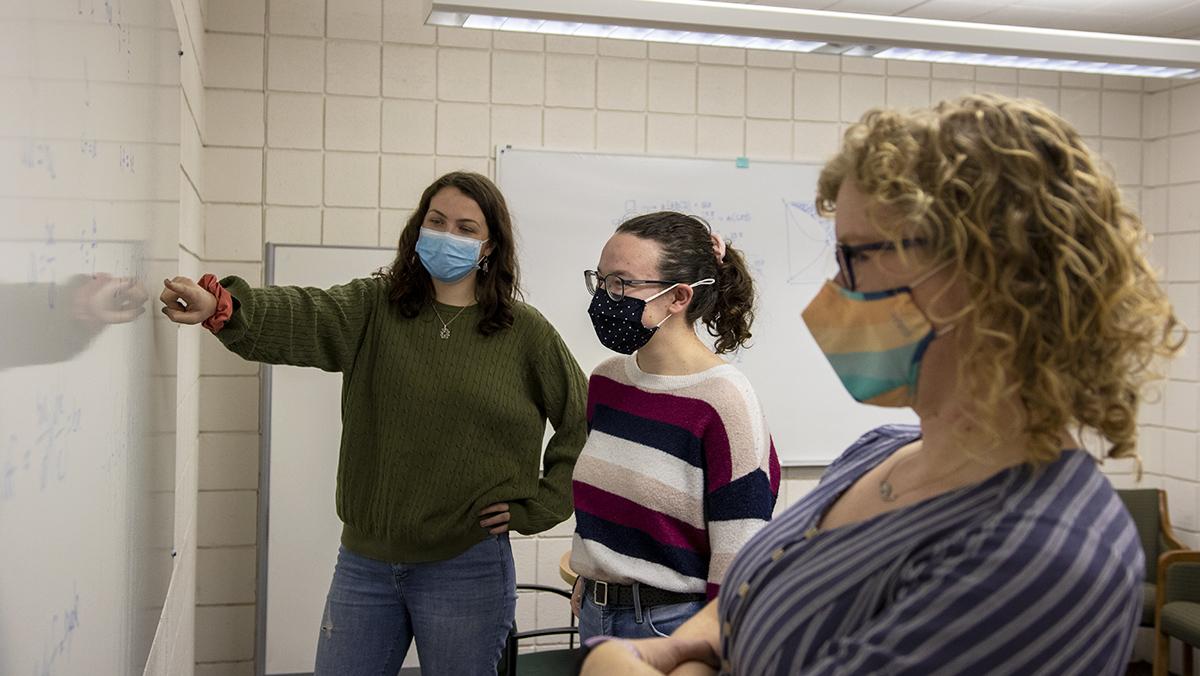 Ithaca College senior Lucy Loukes said this was her second time attending Women in Math Day at the college as a volunteer, the first being in 2021. Loukes is pursuing a math major and a business analytics minor, and she decided to volunteer and speak with high school and middle school participants because she first saw the event during her freshman year at the college.

“I thought it was really cool because I know when I was in high school, I was a little lost, and although I did like math a lot and it was my favorite subject, I wasn’t really sure if it was something I could pursue in college as a career,” Loukes said.

Women in Math Day was held from 11 a.m. to 12:30 p.m. Feb. 5 remotely through Zoom. This is the second year that the free event has been held remotely due to the COVID-19 pandemic. Approximately 30 participants attended the event, including three professors in the Department of Mathematics, four career panelists, seven Ithaca College student volunteers majoring in math, and high school and middle school students, mainly from local schools. The panel consisted of alumni Melissa McGahan ’18, Noelle Sullivan ’19, Caitlin Wormsley ’16, and Tulia Plumettaz, director of machine learning at Wayfair. Students were able to ask questions and hear about what it is like to major in math in college and pursue a career in the field of mathematics. The first Women in Math Day at the college was in 2018, Megan Martinez, associate professor in the Department of Mathematics, said.

Martinez said she has been the main organizer of the event and her main role is putting together the career panel, with diverse career interests, and acting as an emcee on the day of the event.

“There’s all sorts of things that people do with a math degree and when you’re just in high school all you’ve seen of math is, you know, some algebra and stuff and that is not very clear, so this event is just, ‘Hey, do you have some interest in math?’ Just, ‘Here’s some more information about what you could do with it,’” Martinez said. “It’s actually a major that allows you to go to tons of places and I think that’s not always clear.”

Senior Emma Anderson said she accidentally applied to the college in the math program, thinking it was actually the accounting major, but then realized during her first semester that she was excited to be majoring in math and wanted to become a teacher. She also served as a volunteer at the event.

“I think it’s really important that we keep like enforcing that women should be enough because I think there’s a lot of, like there’s this sort of implicit understanding that math is like a boys and men subject,” Anderson said.

Women make up only 27% of STEM workers as of 2019 despite making up 48% of the total workforce, according to the United States Census Bureau.

Wormsley, a data engineer at Lyft, said that she majored in math at the college and that this was her first Women in Math Day. She said that Martinez reached out to her about the event and that she wanted to attend to educate young people, because she thought she wanted to be a math teacher in high school due to not knowing about a lot of careers involving math.

“I’m always happy to, you know, participate in these types of events and panels,” Wormsley said. “Anything to get young women interested in STEM I think is definitely worth my time and valuable.”

Wormsley said she thinks there is progress to be made in helping women join STEM fields, such as making sure professors provide support to females pursuing STEM in college.

Loukes said she thinks Women in Math Day will continue to be beneficial in years to come.

“Just really growing the community, I think, is really good and allowing for younger people to kind of see that it’s not impossible to do things that might seem a little more difficult from the outside view and knowing that there is a community out there for you, for whatever you do, is important,” Loukes said.