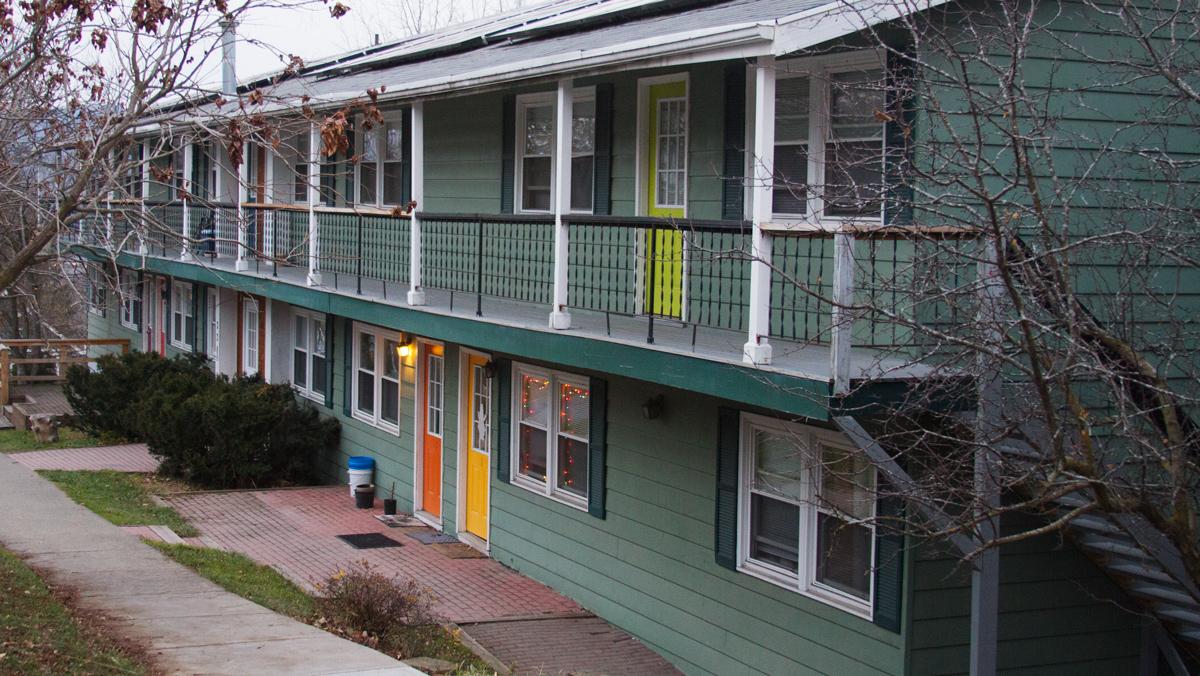 Connor Lange/The Ithacan
Permanent residents on South Hill have raising concerns due to the increase of student-occupied housing. The implementation of the new zoning laws on South Hill properties will prevent the creation of more housing developments for students.
By Laura O'Brien — Staff Writer
Published: December 6, 2017

Ithaca’s Planning and Economic Development Committee has approved the implementation of new construction restrictions on South Hill properties, a measure which will prevent the creation of more housing optimized for students.

This overlay zoning district, approved at Ithaca’s Planning and Economic Development Committee Nov. 1 meeting, prohibits properties in the designated South Hill neighborhoods from constructing more than one primary structure per tax parcel. This means that additional buildings, such as duplexes that are often rented out by students, cannot be constructed on a piece of property within this zoning district.

The area plan for the South Hill neighborhood will address permanent residents’ concerns that the character of the area is changing as a result of an increase in the type of housing usually occupied by students. Residents have been complaining for years that due to an influx of student renters, neighborhoods have become noisier, more littered and more susceptible to property damage from students. The plan will also determine whether new guidelines will be put in place to permanently ensure that no additional student-aimed housing can be constructed to further affect the character of the neighborhood. Work on the South Hill area plan will begin within the next year.

There has been a mixed reaction to the overlay zoning district from the South Hill community. John Graves, South Hill Civic Association president, supported the measure as a first step to addressing the grievances many South Hill residents have with the increasing number of rental properties and off-campus student housing, but does have some reservations about the breadth of the zoning change.

“There’s a lot of negative repercussions of this,” Graves said. “Nobody will be able to do anything on their property because the overlay forbids any other living quarters. … That’s going to affect a lot of people.”

The overlay zoning district also prevents permanent residents hoping to gain a second source of income from constructing or converting a secondary rental structure on their property.

“I agree with many of my neighbors about this student housing infill and that it is an issue,” Seaver said. “I think that limiting housing is not going to fix the student behavior issue. I think we need to look a little bit more creatively at what are the solutions to the problem on South Hill and, specifically, coming up with something that might limit the things we don’t like but increase the things we do like.”

“What we’re really getting is essentially three bedroom-dorm suites stacked on top of one another,” Rogers said. “What we as residential homeowners see is a real intrusion of dormitories into single-family homeowner neighborhoods.”

In September, Carlie McClinsey, Student Governance Council president, sent an email to the college’s entire student body urging students to be more considerate of the permanent residents in the South Hill neighborhoods. She has also discussed the issue with permanent residents, including Graves, on the IC Community Workgroup.

McClinsey said student behavior and student perception of the South Hill community still must improve significantly for the grievances expressed by permanent residents to truly be resolved.

“It’s been a really difficult situation because creating a culture shift on campus, which is what this really is, doesn’t happen overnight,” McClinsey said. “Part of it is behavioral. I think that when we come as students to college and move off campus, we don’t think of neighborhoods here as we think of neighborhoods back home.”

Claire Borch, associate director of the Office of Analytics and Institutional Research, said 30.3 percent of enrolled degree-seeking undergraduates are living off campus this semester.

Graves has offered residents in the South Hill neighborhood the opportunity to be on an unofficial zoning and land use committee. This way, once the Planning and Economic Development Committee begins to officially discuss the South Hill area plan, the unofficial committee created by Graves will be able to relay the ideas and opinions of a variety of demographics, potentially including students who live off campus on South Hill.

“I don’t even know if students would be interested,” Graves said. “I would love to get them interested because they are residents who live on South Hill, and that’s the people we’re trying to get involved on this.”