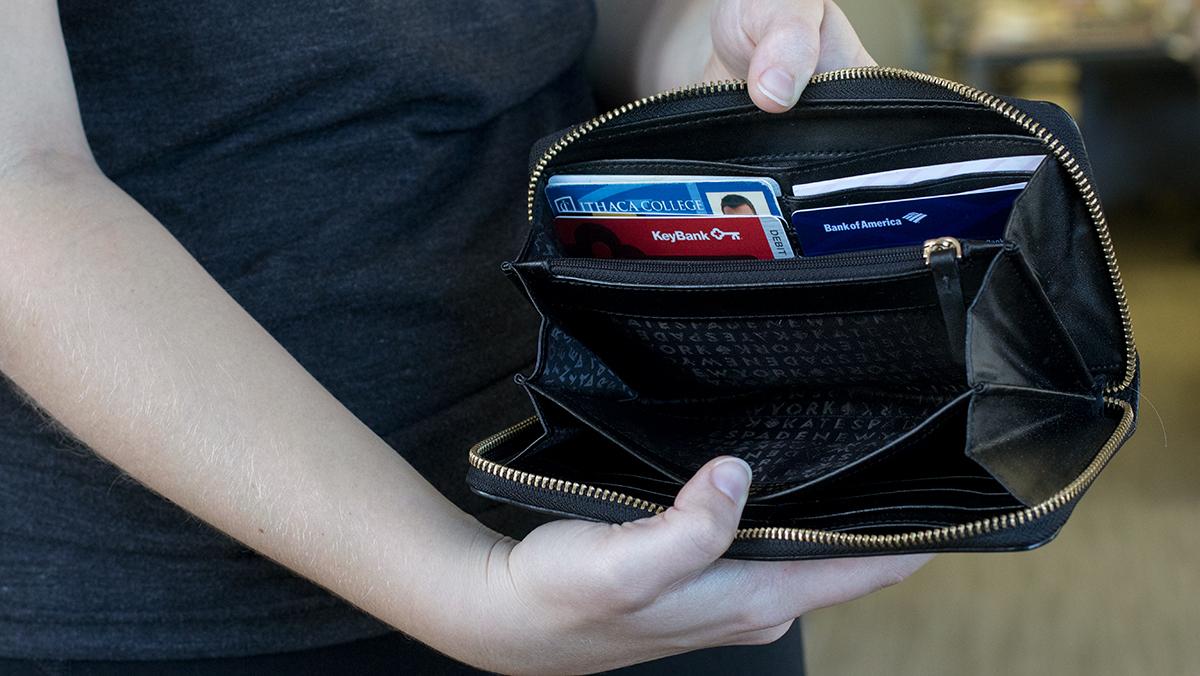 Fernando Ferraz/The Ithacan
Many college students often refer to themselves as “broke” when they may be low on funds, a trend that romanticizes poverty while ignoring the issues of low-income students.
By Kate Nalepinski — Life & Culture Editor
Published: April 26, 2017

The definition of “broke” can be described with one word: penniless.

To college students, the term may be more complex: struggling financially as a repercussion of future loans and/or dependency on additional finances that are currently saved.

Numerous articles have jumped on the trend, too: BuzzFeed and CollegeHumor highlight the struggles of being a #BACS (Broke–Ass College Student). Things like snatching napkins from the dining halls, eating Kraft cheese and ramen on the regular, and not wanting to use the gasoline in your car are some of these “struggles.”

The etymology of “broke” has a negative connotation. According to the Online Etymology Dictionary, “broke” goes as far back as 1716 as an extension of insolvent. The old English cognate broc meant affliction, or misery.

Why has this narrative integrated into college culture? Why are we following this stereotype? The stereotype produces a culture in which college attendance is a standard, not a luxury. We expect ourselves to attend college — that’s not the financial issue. Everything else is. It’s almost always associated with the fear of not having money. Poverty isn’t something we’ve experienced — but something we’ve had the privilege to learn about in a detached way. There’s a vast difference between not wanting to pay your loans and not having a roof over your head.

It’s so easy to use “broke” because college students have integrated the word into daily life. It’s colloquial. We’re ‘broke” if we don’t have cash on us. We’re broke if we can’t afford a soda this week. The term is monopolizing what it really means to not have money. College students need to take a step back and recognize the privilege we have just being at college.

Glorification of poverty is ignorant and unhealthy. College students have the tendency to romanticize their suffering, highlighting the moderate financial difficulties they have. While their valid complaints may resolve issues on a short-term basis, ignoring other socioeconomic classes, specifically those in minority groups, is only worsening the problem over the long-term. Social mobility is impossible when those in higher classes identify with lower-class stereotypes because it pushes people to ignore impoverished individuals. Romanticizing suffering creates the false notion that the middle class equals the lower class — which eradicates the lower class itself.

A 2014 report from the National School Board Association’s Center for Public Education analyzed recent data from the U.S. Department of Education. It found that by age 26, 12 percent of high school graduates were not enrolled enroll in two- or four-year colleges. Of this 12 percent, most come from the lower end of the socioeconomic scale.

The fact of the matter is that this study only encompasses high school graduates, completely ignoring those who drop out of high school due to financial difficulties. Most people on the lower end of the socioeconomic scale do not have the ability to attend colleges, much less apply to them. College students are perpetuating the class system by convincing other students they are poor and needy, disregarding the lower and lower-middle class. Through the use of words like “broke,” college students are unintentionally stabilizing the class system and separating people from their privilege. It pushes the narrative that those in the higher–middle class are in just as desperate of situations as those who are actually suffering, pushing their plight out of the spotlight.

When college students say they can’t do something because they’re broke, they’re inherently sticking to the negative stereotype that promotes the class system and dismisses minority groups. The broke-ass college kid stereotype inadvertently ignores and undermines the struggles of those with lower socioeconomic status. College students glorify their middle–class poverty to the point where it’s perpetuating the American class system.