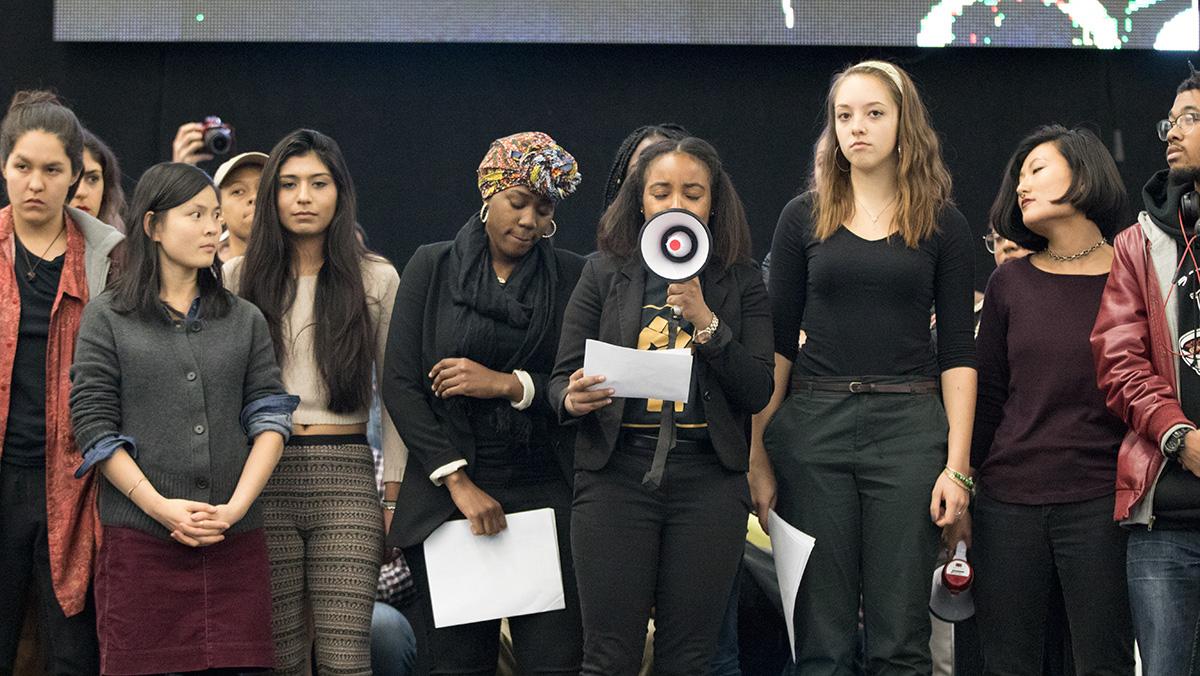 Yana Mazurkevich/The Ithacan
The student group POC at IC and its allies stand on stage and voice their lack of confidence in President Tom Rochon at the “Addressing Community Action on Racism and Cultural Bias” event Oct. 27. After the demonstration, they walked out of the event amid “no confidence” chants.
By Guillaume Gentil
Published: November 4, 2015

I want to clarify: I am not a person of color, but I’m an ally. 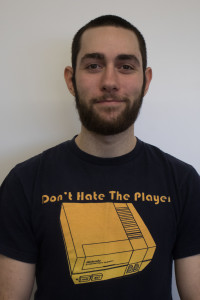 President Tom Rochon’s voice rang out in the Athletics and Events Center. He spoke down from the stage to the students, exploiting the power differential. A lineup of speakers sat in a row behind him, each ready with a PowerPoint meant to bombard students with their orchestrated “good-will” maneuver. However, they did not know that students had planned to be heard on that stage as well, instead of from below.

By this point, I’m sure many in the audience understood that we were simply going to be that, an audience waiting to be saturated again with the administration’s lies and propaganda. A chant was carried on the almost iconic red and white megaphone from previous student protests. More than two-dozen students stood and then walked up to the stage chanting, shouting, a comrade who had invited me to join nodded and I too walked. We climbed onto the stage and seized the microphone. This is when the students’ voices were on the strong end of the power dynamic.

Their speeches tackled contradictions in the administration’s handling of incidents of discrimination against ALANA students. It was stated that the power for change is no longer in the hands of the administration; Rochon no longer has the vote of confidence from many students. The group POCatIC (People of Color at Ithaca College) is hosting its own talks and discussions about the changes students will implement at IC. This marks a prominent evolution in the power dynamic between the administration and the active body of students who feel that the complacency and bureaucratic stalling has reached a breaking point.

The protest culminated in a march out of the A&E Center amid chants. Comments I overheard around the college following the demonstration threw pessimism at the protest, as when some stated in the gossip Facebook page Overheard at IC, “I got 2 points extra credit just for going to this stupid thing.” As I lingered after the walk-out to talk to some of my friends who had participated I heard grumblings from students who doubted anything had been accomplished by the protest.

This should not deter those of us who understand what is going on. We did not attend an event for credit; we went to validate the legitimate grievances and suffering that real people go through every day on this campus. Those who have privilege often do not see what they can offer in terms of support. Their spirit of community is infected with hyper-individualistic interests. They cannot relate to their fellows on a human issue.

This suffering is peaked by the racially insensitive comments made by a Public Safety officer during two active shooter RA training sessions. This suffering is peaked by a panelist at the Blue Sky event calling a woman of color and fellow panelist a “savage.” This suffering is peaked by the AEPi fraternity using racial connotations to sell the theme of their party. However, this suffering is relentless for those who are tokenized, for those who can’t take a walk at night because they are harassed by Public Safety or for those insulted by their peers. POCatIC does not wish to discuss with the administration any longer. People are being hurt, discriminated against, and their criticisms are being rationalized and deflected. This institution has diverted criticism to maintain its reputation and uphold the facade that it is sustaining its diversity statement. As my girlfriend said, the demonstration of direct action on Oct. 27 is preventing Rochon from sweeping events under the rug and addressing the necessary changes that should take place. The members of POCatIC and their allies stood on that stage so that they would be level. And we will stand on every point on campus, because Free Speech Rock is not the only place we will speak freely. I support POCatIC, and there is a lot more to be done.

Guillaume Gentil is a sophomore journalism major. Email him at ggentil@ithaca.edu.