Commentary: College athletes are not a marginalized group 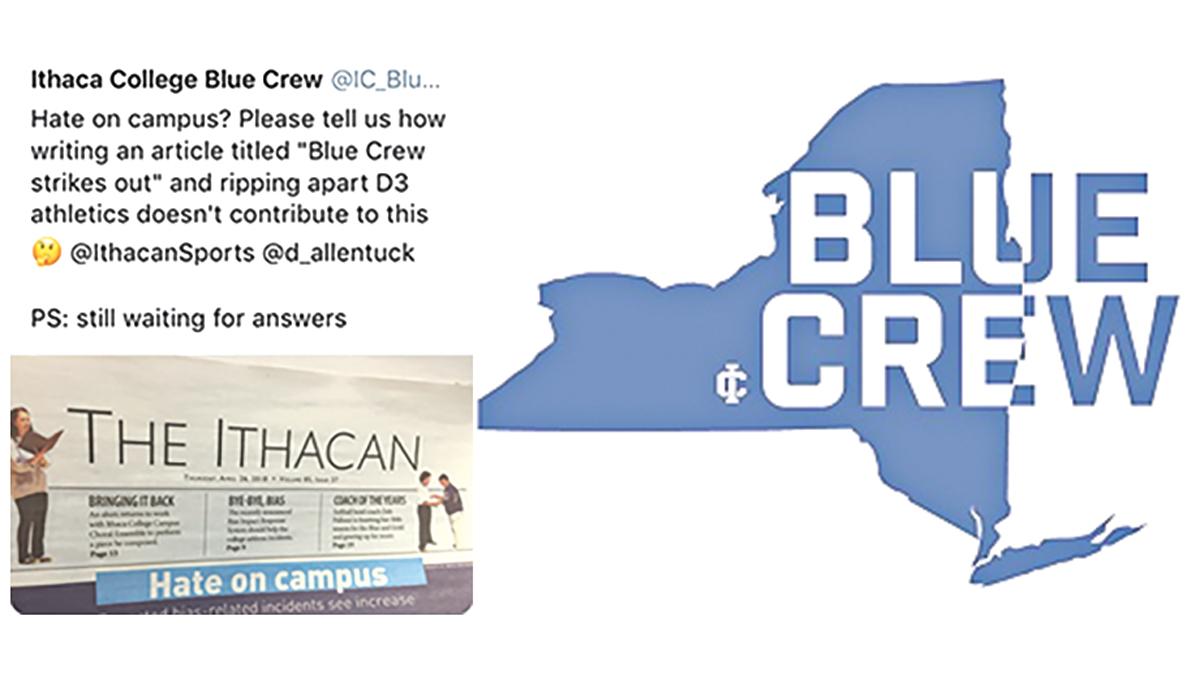 Courtesy of Aria Pinto
The Blue Crew, an organization on campus created to increase sports game attendance, tweeted the above in response to an Ithacan article.
By Aria Pinto
Published: May 3, 2018

On April 25, The Ithacan published a column titled, “Blue Crew struggles to make impact in attendance.” Blue Crew is an organization on campus whose goal is to increase attendance at sports events and bring the community closer together, which I personally applaud. At the end of the column, the writer compared Ithaca College’s sports events to high school games or youth events.

If I was on a college sports team and my games were compared to those of peewee football, I would be furious. Division III athletes put forth an immense amount of hard work both in and out of their practices, lifts, games, tournaments, etc., and comparing them to something so juvenile is insulting to the amount of devotion they exhibit.

The following day, The Ithacan published an article titled, “Hate on campus: reported bias-related incidents see increase,” which updated the local community on hate crimes. The Ithacan reported racially driven incidents such as swastikas drawn in dormitories and phrases such as, “F— black people” written on bathroom walls. The writer also interviewed multiple people within the campus community about the negative impact it had towards marginalized groups.

Blue Crew responded by posting a picture of the article on Twitter with the caption, “Hate on campus? Please tell us how writing an article titled ‘Blue Crew strikes out’ and ripping apart D3 athletics doesn’t contribute to this.” Soon, college athletes on campus started liking and sharing the tweets while other Twitter users became furious with the statements made. Based on the language used in the tweets, Blue Crew made the article about its members instead of giving support to marginalized groups. The tweet has since been deleted.

Under the New York State Penal Law, a hate crime is classified as a specific offense that incorporates aggravated harassment or assault, and there needs to be proof that the suspect’s motive was based on the “belief or perception regarding the race, color, national origin, ancestry, gender, religion, religious practice, age, disability or sexual orientation of a person.” If we use this definition to evaluate the claims made by the Blue Crew account, we can agree the column is not a hate crime but is instead poor judgment towards the college’s athletic community. There is a difference between being criticized in a school newspaper and committing a hate crime towards a specific group of people, and it is important that we acknowledge the difference.

Even though sports teams have the right to be upset about the column, it is not an excuse for making inappropriate claims online. College students who support the messages by sharing or liking them are supporting the comparison between DIII athletes and marginalized groups. To be upset about a column tarnishing your sports team is valid and justifiable. To compare the criticism faced with hate crimes toward marginalized groups is ignorant.

When acts of prejudice, discrimination and racism happen around us, people unfortunately tend to respond with how Blue Crew’s Twitter did: identifying with the events occurring in the campus community to feel important. There are victims on both sides of the issue. However, one of these sides includes an unrealistic comparison. Another type of response is to have no response. Reducing the severity of the situation by ignoring it makes you complacent with an oppressor or hate crimes, which the people on Twitter who favorited the tweets without response or stayed quiet did. These responses create toxic debate instead of moving toward honest conversations of privilege and oppression.

In times like these, it’s important to have empathy and listen to individuals of marginalized groups that have been victims of hate crimes. Why aren’t we talking about why people commit hate crimes in the first place? An inclusive environment must begin with discussing the actions that exist between the privileged and the oppressed.