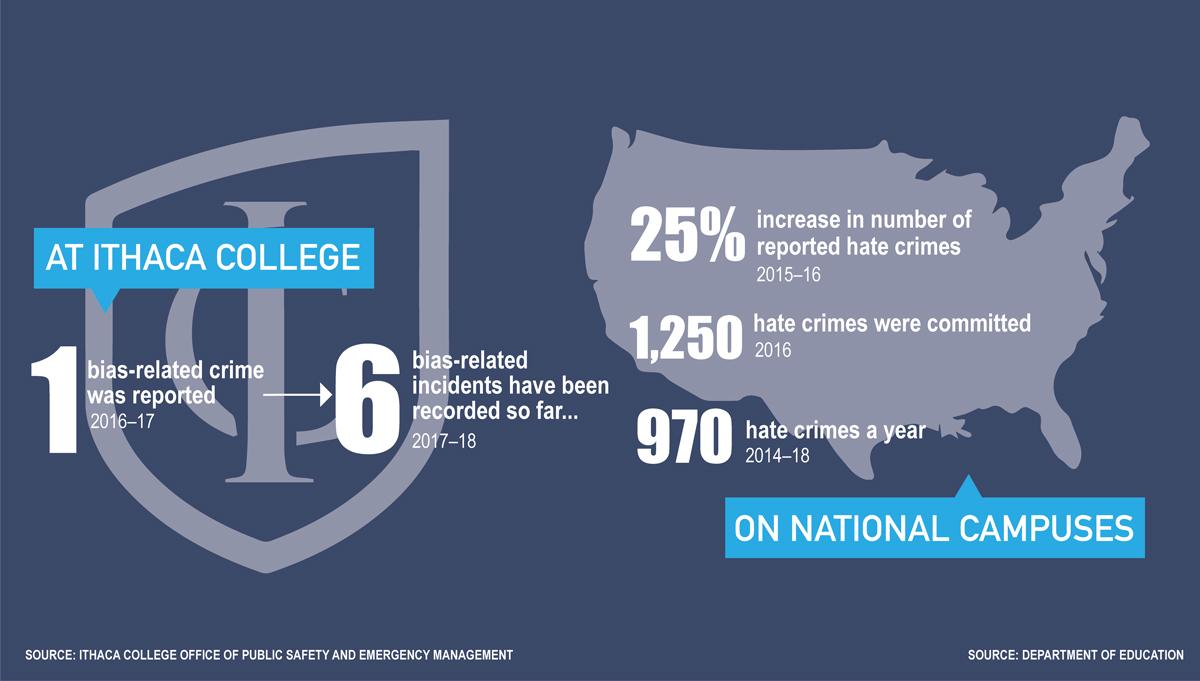 Cases of aggravated harassment and other crimes using discriminatory speech or symbols have increased at Ithaca College during the 2017–18 academic school year compared to previous years.

From August 2017 to April 23, there have been three cases of aggravated harassment, involving swastikas, in residential halls according to the Office of Public Safety and Emergency Management crime and fire logs. The total number of bias-related incidents reported so far this academic year is six, compared to one last year and two the year before, Dunn confirmed.

Each case was classified under aggravated harassment according to the New York State Penal Law 240.31, which states, “Etches, paints, draws upon or otherwise places a swastika, commonly exhibited as the emblem of Nazi Germany, on any building or other real property, public or private, owned by any person, firm or corporation or any public agency or instrumentality, without express permission of the owner or operator of such building or real property.”

Public Safety Lieutenant Thomas Dunn said that Public Safety cannot declare these crimes as hate crimes according to the penal law but that the college has developed a program for dealing with offensive crimes.

For an incident to be classified as a hate crime under New York State Penal Law, the incident needs to be a specified offense, such as aggravated harassment or assault, and there needs to be proof that the suspect’s motive was based on a “belief or perception regarding the race, color, national origin, ancestry, gender, religion, religious practice, age, disability or sexual orientation of a person, regardless of whether the belief or perception is correct,” according to the penal law.

A new Bias Impact Response System is set for pilot testing over the summer. The program, created by Bill Kerry, director of the Public Safety, and Sean Eversley Bradwell, director of programs and outreach for the Division for Educational Affairs, aims to improve the current way in which the college address bias– and discrimination–related incidents. Students currently do not have a system to report incidents that are not at the criminal level, but anything that is at the criminal level can be reported to Public Safety.

Kerry said that while it is important to find a suspect in these crimes, one of the main purposes of the program is to serve as a preventative measure for bias on campus.

“It’s really important that we talk about holding people accountable or finding out who it is that’s committing these actual acts,” Kerry said. “This is actually also part of a prevention plan because there is accountability for it and to educate our community that these things are hurtful and hateful.”

Bradwell said part of the program is also to have an annual report system to keep a record of bias-related incidents on campus and archive those incidents so the college is able to keep track of trends or problems with bias on campus.

“Through the campus climate survey, some members of our community and campus population were identifying that they didn’t always feel welcomed,” Bradwell said. “We wanted to find a way to share things like microaggressions, which may not rise to the level of criminal complaints, but things that they still experience that didn’t make them feel welcome on campus.”

Kerry said the program will serve as a centralized reporting process for the community when  acts of bias are experienced or observed. The program will help those who report the issue access resources of support, he said.

From 2014 to 2016, the college reported zero hate crimes. In the 2016–17 academic year, there was one bias-related crime reported. In December 2016, an anti-Semitic word was written in Bogart Hall and recorded as an aggravated harassment. In the 2015–16 academic school year, two cases of aggravated harassment were reported. Two swastikas were drawn in East Tower, one in September 2015 and one in May 2016 . There was one case of anti-Semitic graffiti in May 2013 and one case where a swastika was drawn in a residential hall in April 2014.

The first case of aggravated harassment in this academic year was reported in East Tower in November, when a student drew a swastika on another student’s whiteboard. Dunn said that the suspect was found but that their motive was not based on hate — it was based on the student’s personal dislike of another student — so it could not be classified as a hate crime.

The second case of aggravated harassment was in a Terrace 9 bathroom. A swastika was drawn on a stall door in March, Dunn said. A suspect has not yet been identified, Dunn said, so a motive cannot be determined.

The third case of aggravated harassment was in a West Tower bathroom. A swastika was burnt onto the cinder block wall April 2018, Dunn said. Again, Dunn said a suspect has not yet been identified, so a motive cannot be determined for this case.

A fourth case of aggravated harassment was reported in Gannet Center in December of the academic year. Although a swastika was drawn, Dunn said, an exact time could not be pinpointed, and it is possible that the faintly drawn swastika might have been drawn in an earlier year and not reported until recently.

Dunn said he cannot rule out a connection between these crimes, but he said a connection is unlikely because students need IDs to access individual buildings or floors.

Recently, a case of making graffiti, according to the New York State Penal Law, was reported on the third floor of Williams. The words “F— Black people” were written in a gender–neutral bathroom.

Another case of making graffiti was reported April 22 around 11 p.m. in the Fitness Center. Homophobic language was written on the wall inside a gender–neutral bathroom, Dunn said. Both cases are still in open investigation, and Public Safety asks that anyone with any knowledge of these cases come to them with information. It is difficult to find a suspect when a crime is committed in a bathroom due to the lack of cameras, Dunn said, so the office relies majorly on tips from the public in these cases.

Freshman Jordan Stecker reported that his mezuzah, a prayer scroll, was knocked off of his door and damaged in Lyon Hall at about 9:55 a.m April 24. Dunn said the offense was classified as Criminal Mischief under the penal law and Public Safety is seeking assistance from the public to identify the person or persons responsible.

Dunn would not release the specific language of discriminatory graffiti.

“Public Safety understands and sympathizes with the feelings of our community and our community members,” Dunn said. “We are under the constraints of following the New York state statutes, how they are written and how you must apply those statutes.”

Regardless of the classification, hate symbols or hate speech in any form are not tolerated by the administration, President Shirley M. Collado stated in an email to the campus April 20.

“Let me state unequivocally that there is no room for this kind of behavior or language at Ithaca College,” Collado said in the email.

“Hillel at Ithaca College is aware of the incidents and condemns these symbols of hate, which have no place in our community,” Goldberg said.

The Hillel community is notified by Public Safety or college administrators every time that a crime like this occurs.

“We have appreciated working closely with Ithaca College administrators, law enforcement and student affairs as these matters are investigated and those responsible are held to account whenever possible — as well as President Collado’s public statement of condemnation,” Goldberg said. “We will continue to work with our campus and community partners to ensure that all Jewish students continue to feel safe and welcomed on campus and that incidents like this do not happen.”

Goldberg said she feels supported by the college.

“When somebody does something hateful under the cover of anonymity and it’s something that feels deeply painful, there’s nothing that the college can do except pursue every possible lead that they have and work really hard on creating more dialogue, more inclusion, more education about why this is unacceptable,” Goldberg said. “Our Hillel works to be a partner in those programs that the college is offering to try and increase the humanity between all of us on campus.”

Overall, Goldberg said she believes that most Jewish students feel that their identity is celebrated here and that the Jewish community is lucky to have that.

“Ithaca College is such as warm and welcoming environment,” Goldberg said. “We have a tremendous Jewish population on this campus, and I don’t feel that this intolerant behavior on the part of perhaps one person is in any way representative of the tone of this campus.”

A group of 10 student leaders in the Hillel community also released a statement to say that it does not tolerate these crimes and wants Hillel to remain a safe space for students.

“Hillel at Ithaca College denounces the actions committed by those who stand for hatred, injustice, and insensitive violence,” the statement said. “Vandalism and the defacement of College property, especially destructing property in way that represents anti-Semitic ideas or racism, is not and will not be tolerated. Hillel is, as always, a safe-space, along with being a warm and welcoming environment, where students can come and be together with staff and peers as we continue to celebrate Jewish life at Ithaca College.”

Ithaca College is not the only college to recently experience bias– or discrimination-related crimes. The Theta Tau fraternity at Syracuse University was expelled after members participated in an anti-Semitic, homophobic and racist video earlier this April.

Junior Talia Jean Weindling reported the racist graffiti in the Williams bathroom. She said she feels as though the college has changed during her time here.

“I know Ithaca as a very peaceful, loving, equal type of town, and I guess that’s why I applied to this school,” Weindling said. “I think that’s been changing and people have been more open, knowing that they can have more support in this type of red ideology.”

A study published in the Chronicle of Higher Education, “After 2016 Election, Campus Hate Crimes Seemed to Jump. Here’s What the Data Tell Us,” shows an increase in religiously and racially motivated hate crimes on college campuses nationwide from 2015 to 2016. Dan Bauman, the article’s author, said the data cannot explain a direct correlation between President Donald Trump’s election and an increase in hate crimes without specifically looking at each individual crime.

Bauman wrote that according to new information from the U.S. Department of Education, there was a 25 percent increase in the number of reported hate crimes on college campuses from 2015 to 2016. Data collected from the FBI says that in November 2016, a group of colleges, universities and medical schools reported 48 hate crimes compared to an average of 20 hate crimes reported by during November from 2012–15, Baumann wrote. Baumann said that the increase in discrimination-related crimes could be in line with the trends in his articles. However, numbers have not yet been released from 2017 to confirm that nationwide hate crimes have continued to increase, he said.

Stecker is the sales manager of The Ithacan.